Japan strengthened their bid for automatic qualification to the 2022 World Cup in Qatar on Thursday, beating Vietnam 1-0 through an early Junya Ito goal.

With Group B leaders Saudi Arabia and second-place Australia playing a scoreless draw earlier in the day, the Samurai Blue closed to within a point of the Socceroos and four of the Saudis at the halfway mark of the final Asian qualifying stage. 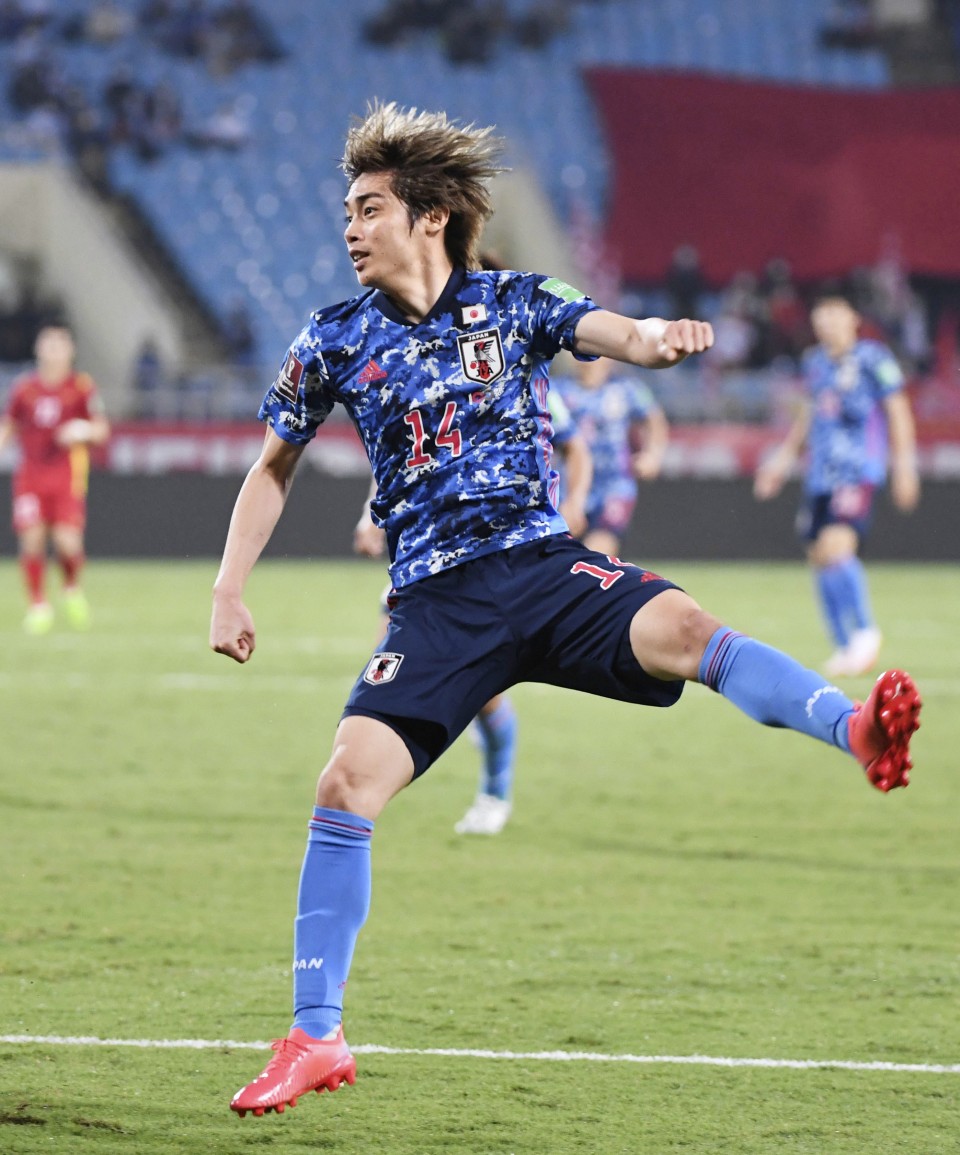 Supplied photo shows Junya Ito of Japan in action during the first half of a Group B football match against Vietnam on Nov. 11, 2021, at My Dinh National Stadium in Hanoi, in the final group-phase round of Asian qualifying for the 2022 World Cup in Qatar. (Copyright JFA)(Kyodo)

The top two sides from each of the two Asian qualifying groups will automatically advance to the World Cup, with the third-place nations facing off for a berth in an intercontinental playoff.

Japan took the lead in the 17th minute at Hanoi's My Dinh National Stadium when Takumi Minamino broke away down the left and sent a perfectly weighted cross for Ito to side-foot home from directly in front.

The Genk winger netted again on a 40th minute counterattack, but his superb solo effort was somewhat harshly overturned on video review after Ao Tanaka was ruled to be offside at the moment Ito unloaded from distance.

Japan manager Hajime Moriyasu introduced right-back Miki Yamane to a starting lineup otherwise unchanged from the side that beat Australia 2-1 in their previous qualifier on Oct. 12.

Playing in front of home supporters for the first time in the qualifying campaign, Park Hang Seo's Vietnam were aiming for their first points in Group B, but barely troubled Japan keeper Shuichi Gonda.

Japan captain Maya Yoshida, one of 11 Europe-based players who arrived late in Hanoi after their charter flight was delayed, said the win was a satisfactory result under challenging conditions.

"We were set on taking three points from this match, so above all, I'm really happy we achieved that," the Sampdoria defender said.

"We were in bad condition and just getting here was a struggle, but everyone gave their best to complete the task."

"I might be happier if we had scored again, but Vietnam aren't a bad team, so I'm satisfied overall given the circumstances.

With back-to-back wins for the first time in the current qualifying phase, Moriyasu's squad looks to be back on course after a nightmare start of one win and two losses from their first three Group B matches.

They will face Oman on Tuesday local time in Muscat, where they will seek to avenge a 1-0 upset in their opening group game at Panasonic Stadium in September.