Japan has accepted five diplomats appointed by Myanmar's military-controlled government, Japanese government sources said Friday, a move that could be viewed as endorsing the junta's rule.

The Japanese government deemed it was unable to refuse their appointments for fear that doing so would adversely affect its ability to protect Japanese nationals in the country amid political turmoil in the wake of the military's February coup that ousted the civilian government of Aung San Suu Kyi, a Foreign Ministry source said. 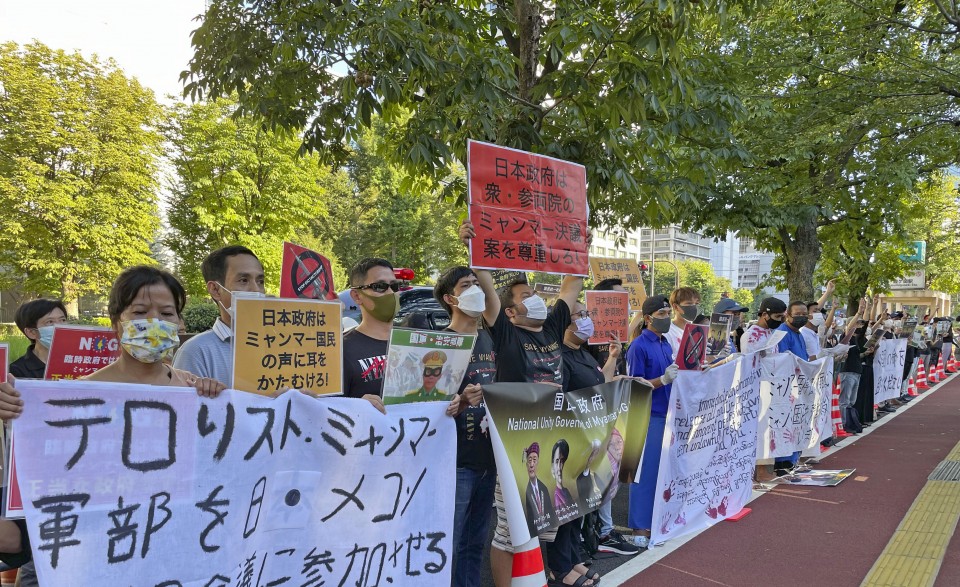 Myanmarese people in Japan criticize the coup by the military in front of the Foreign Ministry in Tokyo on Aug. 4, 2021. (Kyodo)

The government also contends there must be some practical connections with the military government, the source said.

In March, the junta dismissed two diplomats at its embassy in Tokyo after they boycotted their duties in protest of the coup and the ensuing violent military crackdown on demonstrators.

While the junta had applied for diplomatic visas for military-appointed replacements for Aung Soe Moe, and the other diplomat, who wishes to remain anonymous, Japan said it had not processed them.

Since May, the five junta-appointed diplomats have been acknowledged by Japan as representatives of Myanmar on several occasions. However, they are not replacements for the two dismissed diplomats, according to multiple sources.

The Japanese government has honored requests by the two fired diplomats to remain in the country, with the source saying the government will not withdraw their visas.

Japan has condemned the military's violent crackdowns on peaceful protesters and called for a halt to the violence, the release of Suu Kyi and other detainees and a return to the democratic process. But it has not joined the United States and other democracies in imposing sanctions on the individuals and groups involved.