Los Angeles Angels dual threat Shohei Ohtani is not only keen on recommitting to his two-way role in the 2022 season, he says he is ready to add even more responsibility if given the chance.

Speaking to reporters at the Japan National Press Club in Tokyo on Monday, Ohtani, who just completed his 14-day home isolation period, said he would welcome the opportunity to pitch, hit and play a defensive position regularly next year. 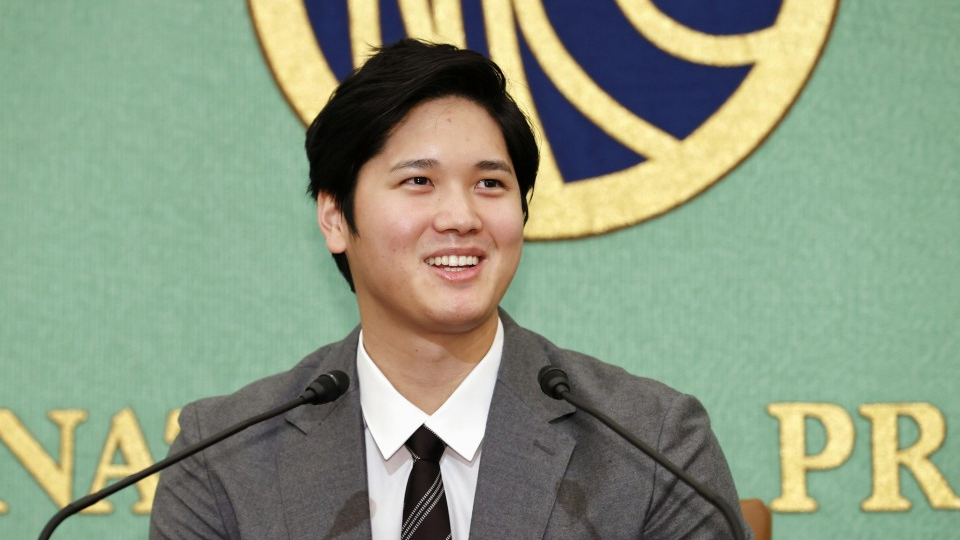 "I did play outfield after a pitching start a couple times this season," Ohtani noted.

"But that decision, if it happens from the start, will need to involve not just the manager but the GM, too, as it has to do with the overall balance of the team. I'll take it if I'm given the chance. It means more options for me."

Ohtani, dressed in a suit and tie, gave short, straightforward answers to the dozens of questions thrown at him. He was asked about the 2011 Great East Japan Earthquake, his possible wedding plans, charity work, offseason meals and his taxes in the United States as well as Babe Ruth and baseball mechanics.

He said he has no plans to start a family soon and that his ever-present interpreter Ippei Mizuhara was probably his most important sounding board and source of support.

To many of the questions about his extraordinary season, his first in a full-time two-way role, the 27-year-old just smiled shyly and said he does not know how to explain.

"People might say I'm 'on another level' but I don't see myself that way. I'm doing something different and there are not many examples (of two-way players). If there are more instances like me we'll have a clearer idea of whether or not I'm amazing."

"It wasn't like I planned the season to be this way. My manager (Joe Maddon) and I communicated a lot, and it just so happened that I was okay pitching and hitting in the same game more times than expected," he said.

Given nicknames by fans like "Superman," "Super Freak," "Unicorn" and "Alien" as a reflection of his unparalleled talent, Ohtani told a reporter who questioned whether his smiling demeanor sometimes hides negative feelings that he has normal emotional responses.

"Of course I feel down. It was more psychologically stressful in the latter half of the season when we weren't winning games. But we play almost every day and every day is a good day or a bad day," he said.

"Only someone who gets to play gets to experience that so I feel blessed. Even the down days are part of my wonderful year."

He also said fan support amid another losing season has played a huge role in him improving his mental toughness. The Angels finished the season 77-85 and in fourth place in the American League West.

"Regardless of result, fans keep coming to the stadium. I want to see them happy and that's what drives me every day. That, plus my strong desire to be a great athlete and my refusal to give up."

But he did not pitch in 2019 and only made two starts in 2020 while recovering from elbow ligament-replacement surgery he had in September 2018. He continued to contribute to the Angels as a designated hitter.

In 2021, Ohtani, the consensus favorite to be named AL MVP on MLB Network at 6 p.m. U.S. eastern time on Thursday, was healthy and got through a full 162-game schedule remarkably unscathed given his workload.

He has already won many awards this offseason -- among them the Silver Slugger Award, Commissioner's Historic Achievement Award and Players' Choice Award as Major League Player of the Year and AL Outstanding Player.

While remembering to give credit to his former mentors like Hideki Kuriyama, his manager at Nippon Ham Fighters in Nippon Pro Baseball, and his Hanamaki Higashi High School manager Hiroshi Sasaki, Ohtani said he prefers to dream of the future rather than bask in the glories of the past.

"I'm grateful for all the awards. But my mind is on next year. I want to work hard to win more awards. It's great that I'm rewarded for all the numbers I built up this past season but it's not like I'm waiting impatiently (to be recognized)," he said.