Nippon Steel Corp. said Thursday it has filed lawsuits against Toyota Motor Corp. and Chinese steelmaker Baoshan Iron & Steel Co. alleging infringement of a patent for production technology related to a key device for electrified vehicles, in a rare legal battle between a Japanese steelmaker and one of its major customers.

The steelmaker said it is seeking damages of 20 billion yen ($176 million) from each company and has also asked the Tokyo District Court for an injunction prohibiting Toyota from manufacturing and selling in Japan electrified vehicles equipped with motors using non-oriented electrical steel sheets suspected of violating its patent. 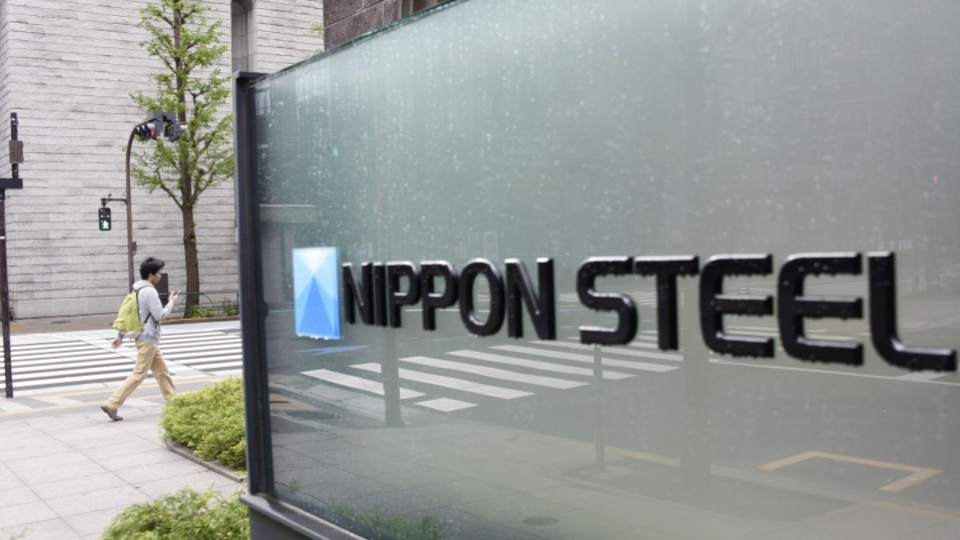 Photo taken in May 2019 shows a sign of Nippon Steel Corp. at a Tokyo building housing the company's headquarters. (Kyodo)

Toyota sold over 500,000 hybrids and other types of electric motor-driven vehicles in Japan in 2020, when its global sales totaled 8.69 million vehicles.

Japan's largest steelmaker did not disclose the details of its injunction request, such as targeted brands or the number of vehicles it covers.

Nippon Steel said in a statement that it had discussed the matter with the two companies but failed to reach a resolution, leading it to take legal action to "protect its intellectual property rights."

The company claims the major Chinese steelmaker has violated its patent related to components and thickness necessary to produce the non-oriented electrical steel sheets.

It is rare in Japan for industry leaders engaged in mutual business transactions to be involved in a legal battle, and the first time for Nippon Steel to sue an automaker for patent infringement.

"Such matters should be discussed between material manufacturers, and we have learned of this lawsuit with great regret," Toyota said in a press release.

The Japanese automaker said it had confirmed that there was no infringement of another company's patent before concluding a contract for the non-oriented electrical steel sheets with Baoshan while also receiving a written statement from the Chinese manufacturer regarding the same.

Nippon Steel and Toyota struggled in recent negotiations on steel product prices after the former proposed it might limit the supply to the Japanese automaker in the face of a surge in raw materials prices.