A spokesman for Myanmar's military, which has seized power in the country following a coup in February, said Monday the military government has received an invitation for a senior Foreign Ministry official to attend a virtual ASEAN summit meeting on Tuesday.

Maj. Gen. Zaw Min Tun expressed unhappiness about the military leader's exclusion from the meeting of the Association of Southeast Asian Nations and related events this week, holding out the possibility that no one would represent Myanmar on the occasion.

ASEAN foreign ministers decided earlier this month to exclude Senior Gen. Min Aung Hlaing, commander in chief of the military, from the meetings that will run through Thursday and decided instead to invite a "nonpolitical representative." 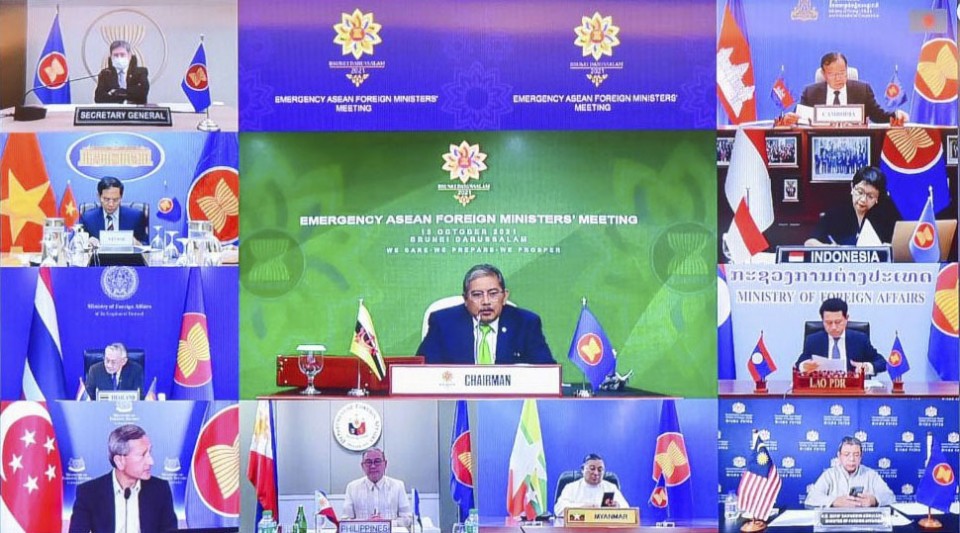 The decision was based on the military's lack of cooperation with ASEAN in implementing a five-point consensus aimed at finding a peaceful solution to Myanmar's political crisis.

"Actually, the head of state shall be invited for the summit meetings," Zaw Min Tun told reporters, adding that the ASEAN decision would amount to "an insult to our sovereignty."

"That is why we are not sure whether to join the meeting," the spokesman said.

In a statement issued later Monday, the Foreign Ministry said it informed summit organizer Brunei that it "can accept the participation of Head of State or Head of Government or his Ministerial level representative" at this week's gatherings, but "downgrading the level of participant and limiting his role of discussions" would be contrary to the ASEAN Charter.

ASEAN's five-point consensus includes sending a special envoy to Myanmar to mediate dialogue between all sides in the country's political turmoil.

A visit by the envoy, Brunei second foreign minister Erywan Yusof, however, has not been approved by Myanmar's military authorities. The authorities have cited the envoy's insistence on meeting with "some specific individuals," presumably ousted civilian leader Aung San Suu Kyi and other opposition figures.