FEATURE: Time is running out for victims of world's 1st nuclear explosion

Speak of Hiroshima and Nagasaki, and the significance is obvious. "Trinity Site?" Most people are still unaware that it was the location of the world's first nuclear explosion and endures as one of the most consequential sites in human history.

Drifting packs of tourists take turns snapping photographs in front of a 3-meter obelisk where a plaque explains that Trinity is where the first nuclear device was ever exploded on July 16, 1945. Most seem indifferent to what many view as the stage for a dry run to the devastating atomic bombings of the two Japanese cities. 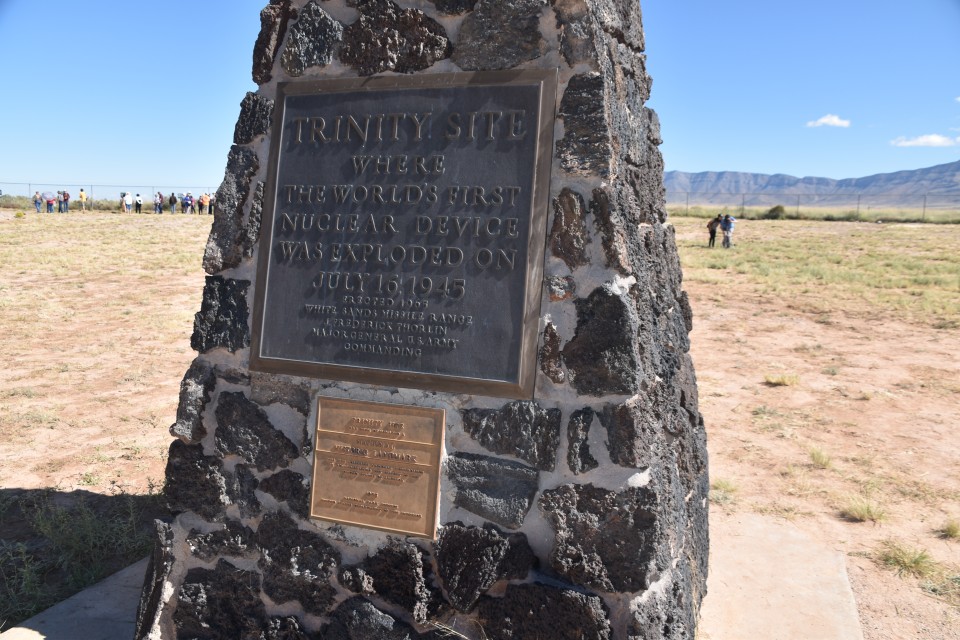 The site, part of the U.S. Army's White Sands Missile Range in southern New Mexico, opened to the public on Oct. 2 for the first time in two years and saw about 2,500 visitors, a modest downtick from previous years, which site officials attributed to the coronavirus pandemic.

Aside from the plaque and some photographs depicting the site and explosion that occupy a nearby fence, little illustrates the magnitude of what happened there 76 years ago when the Manhattan Project's secret test scattered radioactive ash over the residents, and flora and fauna, of nearby villages.

But at the entrance to the site, a small group of peaceful protestors display signs and hand out pamphlets to raise awareness for "the unknowing, unwilling, and uncompensated innocent victims" of the 1945 test. Public access at Trinity is only allowed twice a year.

The Tularosa Basin Downwinders Consortium is seeking compensation from the United States government for the generations of people in the region who have suffered from cancer, which the group blames on the downwind fallout.

The scientific and medical communities are divided on whether there is a definitive link between the Trinity test and the number of cancer-related illnesses in the region, including Tularosa, Alamogordo and Carrizozo, but the anecdotal evidence is undeniable.

"We bury our loved ones on a regular basis. Somebody dies and somebody else is diagnosed," said Tina Cordova, a sixth-generation New Mexican and cancer survivor who co-founded the Tularosa Downwinders in 2005. 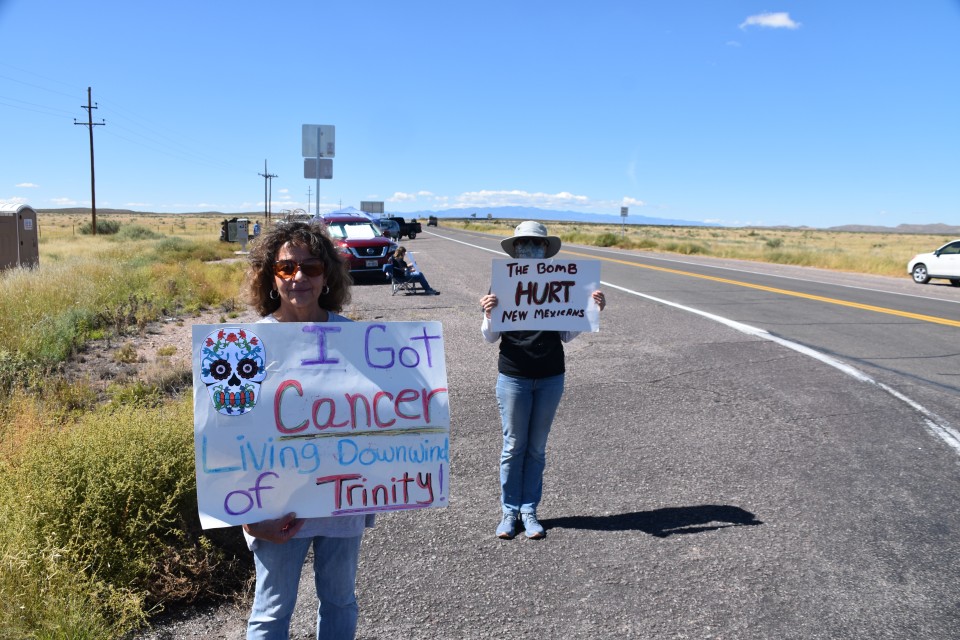 Photo taken Oct. 2, 2021, shows Tina Cordova and other members of the Tularosa Basin Downwinders Consortium staging a peaceful demonstration outside the entrance to the Trinity Site, where the world's first nuclear weapon test was conducted on July 16, 1945. (Kyodo)

"This is the eighth year that we've come here to do this. When we heard that they take tour buses in there, we decided that we would start staging these peaceful demonstrations to make sure that, while they over-glorify the science and industry in there, they hear the history of the people, the actual people, who were subject to this without consent or knowledge."

Cordova was instrumental in getting a bill introduced to Congress in September to amend and extend the Radiation Exposure Compensation Act, which recognizes claims related to the nearly 200 atmospheric nuclear weapons development tests conducted by the United States between 1945 to 1962.

The fund, set to expire on July 11, 2022, has paid out nearly $2.5 billion in claims for people living or working downwind of the Nevada Test Site, as well as onsite participants, uranium miners, millers, and ore transporters, according to the Department of Justice. However, since its enactment in 1990, the RECA has never recognized New Mexico as a downwind state.

Health physicist Joseph Shonka, who co-authored a 2010 government report on the effects of nuclear testing, says that New Mexico downwinders have struggled to qualify for benefits partly because of a nongovernmental report that found "in most cases, it is unlikely that exposure to radioactive fallout was a substantial contributing cause of cancer," recommending compensation based on medical evidence rather than location.

"Only they are making a terrible mistake because they're relying on data that didn't include Trinity at all," Shonka said.

A 2020 study by the National Cancer Institute acknowledged that "it is not possible to know, with certainty, if cancer rates changed in New Mexico in the first decades after the test compared to before the test."

Even so, most New Mexican downwinders are convinced otherwise. Henry Herrera, 87, who was 11 years old when the device was exploded roughly 50 miles southwest of his home in the village of Tularosa, is one of the people Cordova's group is fighting for. 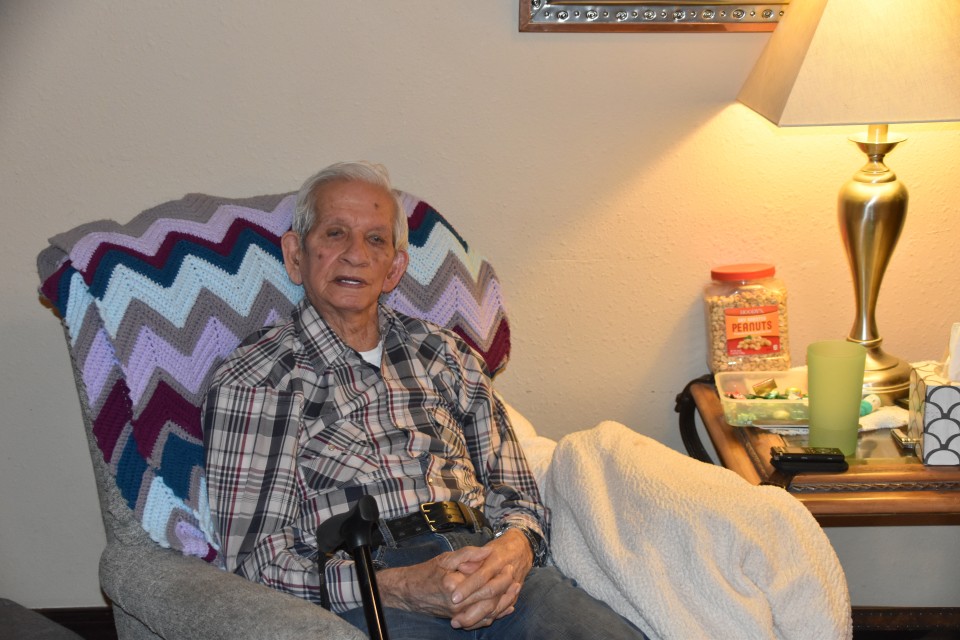 "I had just gotten up, and the first thing I did was go outside. I chopped some wood for mama because we had a wood stove. I had just got a bunch of wood, and I walked up to the front of the house and...(kaboom)!" Herrera said of the explosion at the time. "It was a great big bubble, a cone going up. It was mostly smoke...a little grayish but mostly white. I was just watching it go over from my house," he said.

Herrera, who spent over three decades in the U.S. Navy and toured Japan in the 1950s, said everyone was clueless about what had exploded that day but knew it was enormous.

"I didn't see nothing go up, no missile or nothing. But when that thing hit the ground, let me tell you, whew. It was a hell of an explosion."

By the time the dust had settled, the damage was done. According to the Tularosa Downwinders, the radioactive ash descended onto the thousands of families living within a 50-mile radius of the blast and contaminated the soil, water, crops and livestock vital to the region's small farms and villages.

"A lot of people got cancer here, from all over the area in Tularosa, Carrizozo, Alamogordo, in El Paso even. All the way in Albuquerque," Herrera said. "I'm convinced it's because of the bomb."

Herrera was diagnosed with a parotid tumor, a cancer affecting the salivary glands, in 1998. While touring Japan, he recalled the shock from his Navy buddies after telling them that a bomb similar to the ones that leveled Hiroshima and Nagasaki had exploded near his home. "They couldn't believe it," he said.

Although the magnitude of what happened at the Trinity Site appeared lost on many visitors, others, such as retired veteran Paul Goulding, 68, who lives in nearby Las Cruces, said, "It's just the effects of a nuclear explosion. And there's victims on both sides of the Pacific. And I think the American public needs to understand that their fellow citizens suffered unknowingly. And are still suffering."

Cordova maintains that environmental racism and the government's lack of accountability for their negligence in conducting such a wantonly dangerous experiment are the major roadblocks in getting New Mexicans reparations but is hopeful that the RECA will be expanded under the Biden administration.

"It's horrific that they've ignored us for 76 years," Cordova said. "What I say all the time is we have to be able to look at this issue now through a different lens. We need to put aside World War II and we just have to say we made mistakes. And these are the consequences of those mistakes. And we have to take care of the American citizens that were harmed in the process, period." 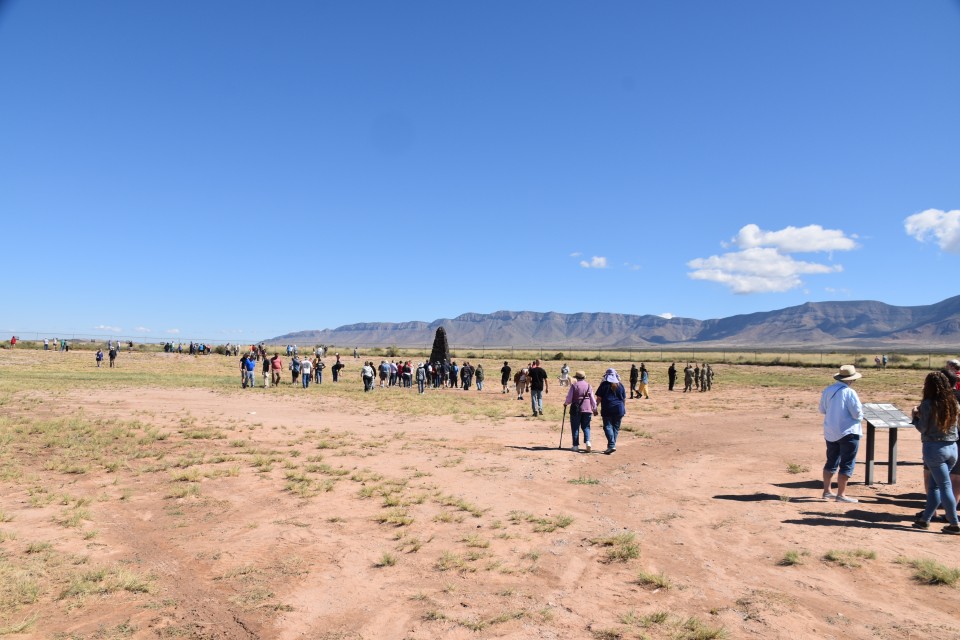 Photo taken Oct. 2, 2021, shows tourists crowding around an obelisk that marks ground zero at the Trinity Site in New Mexico, where the world's first nuclear weapon test was conducted on July 16, 1945. (Kyodo)