Japan's COVID-19 state of emergency was fully lifted on Friday, making it the first time since April that the entire country is not under the measure to curb infections.

The state of emergency, which covered Tokyo and 18 other prefectures, and a quasi-state of emergency ended Thursday following a steady decline in new coronavirus cases nationwide and the eased strain on the country's medical system.

Businesses, such as restaurants and theme parks, have prepared for an expected increase in customers as the government plans to ease restrictions in stages to bring back social and economic activities while also preventing another wave of infections. 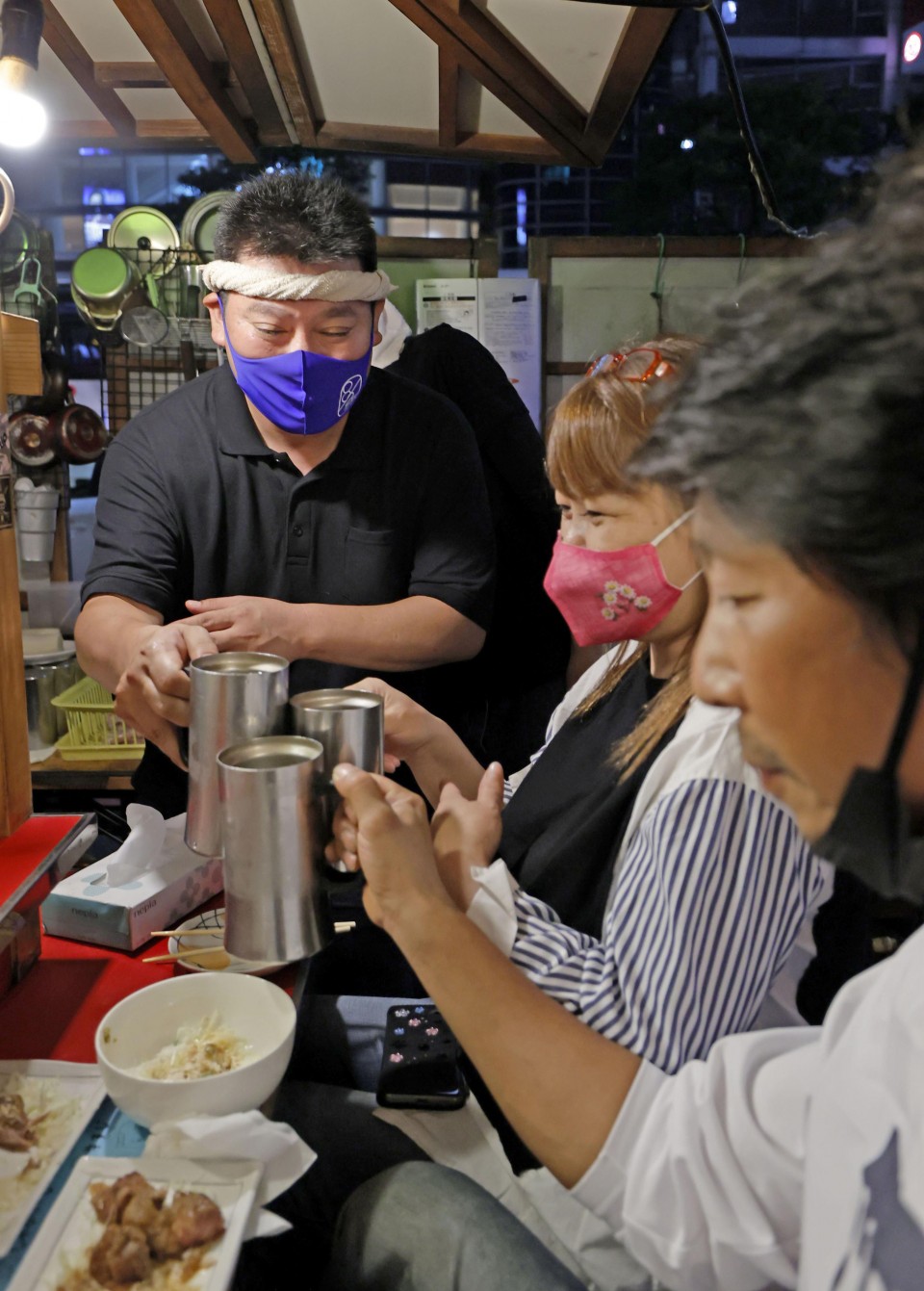 The manager of a street stall makes a toast with customers in Fukuoka, southwestern Japan, on Oct. 1, 2021, after the COVID-19 state of emergency was lifted in Fukuoka Prefecture and 18 other prefectures across the country, allowing restaurants and bars to serve alcohol. (Kyodo) ==Kyodo

On Friday evening, people returned to restaurants and pubs that had been asked to refrain from serving alcohol under the emergency.

Ohama, who opened his restaurant for the first time in over two months, said he received reservations from his regular customers but is still concerned about how long it will take for business conditions to return to normal.

"I hope our life will get back to normal soon so customers can return and enjoy drinks without feeling guilty about it," Ohama said.

Under the state of emergency, people were urged to refrain from nonessential outings and avoid going to crowded places, while restaurants and bars were asked to close by 8 p.m. and not serve alcohol.

The government will continue for about a month to ask restaurants and other dining establishments to close by 8 p.m., but those taking sufficient anti-virus steps can operate until 9 p.m.

In Tokyo, the metropolitan government decided that establishments can serve alcohol until 8 p.m. if they receive certification for their anti-COVID measures.

In Chiba near Tokyo, Munetoshi Hashimoto went to one of the 46 establishments in the prefecture that have met strict requirements regarding the local government's COVID-19 countermeasures, and thus not subject to restrictions on operating hours or serving alcohol.

"This is a restaurant where I feel at ease and enjoy drinks. I can also enjoy the atmosphere here, and drinks taste better than at home," said a 62-year-old man who was visiting the Japanese-style "izakaya" pub after work.

As for the tourism sector, more reservations for domestic tours and accommodations began to come in after people were asked to refrain from traveling under the state of emergency.

All Nippon Airways received about 50,000 reservations, about 10 times more than the average of a month ago, on Wednesday, a day after the government decided to end the state of emergency and the quasi-state of emergency, which covered eight of the country's 47 prefectures.

Attendance at large-scale events such as concerts and sports games has also been eased, with the maximum number of spectators increased to 10,000 from 5,000.

Infections across Japan have been falling since hitting a nationwide daily record of 25,867 on Aug. 20. On Friday, 1,447 cases were reported across the country, including 241 in Osaka Prefecture and 200 in Tokyo.

Tokyo was placed under its latest state of emergency on July 12, 11 days before the opening of the Olympics, joining Okinawa, the only other area then subject to the measure. Other prefectures, including Osaka and Fukuoka, were placed under it in August.