People whose lives have been upended by the coronavirus said Thursday they are hoping for government policies that improve work conditions and bring business back to pre-pandemic levels as Japanese Prime Minister Fumio Kishida dissolved the House of Representatives for an Oct. 31 general election. 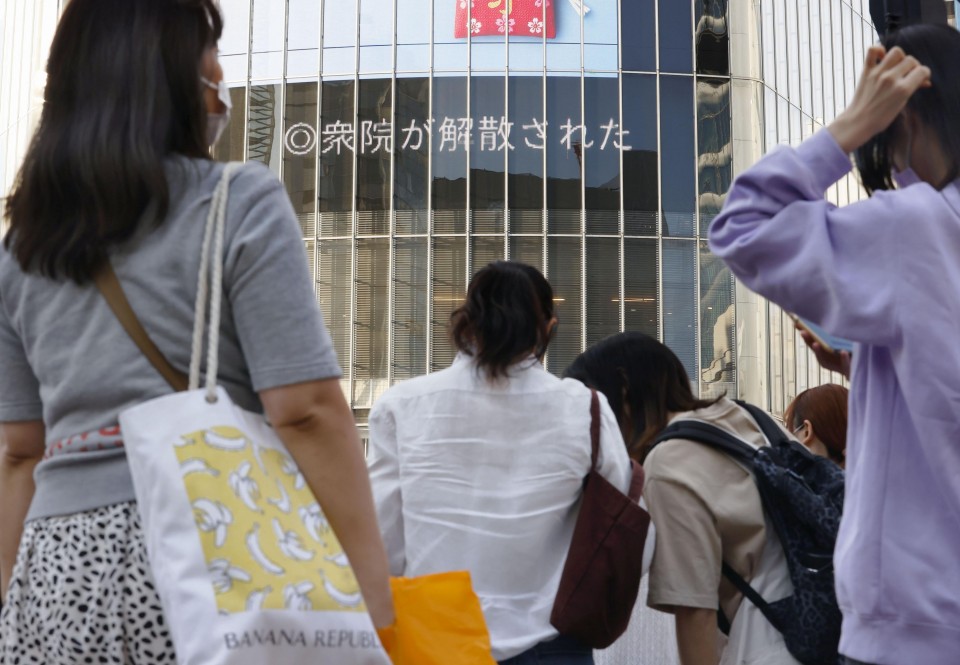 A screen in Tokyo's Shibuya area shows on Oct. 14, 2021, news that Japan's House of Representatives was dissolved earlier in the day for a general election at the end of October. (Kyodo) ==Kyodo

Noriko Doi, a 53-year-old caregiver in Tokyo, said her patients love to chat when she visits them at home, and voiced concern that they are not getting out enough.

"This is a job where human interaction is key. You can't replace that with machines. We want to be treated better," she said.

Yoshihiro Shimaguchi, who runs a gift shop in Sapporo, the capital of Japan's northernmost main island Hokkaido, called for steps to revive regional economies that have slumped amid a fall in tourism.

The 58-year-old said his shop did not benefit from the "Go To Travel" program, implemented last year to promote domestic tourism through government subsidies, because it happened amid a surge in infections in Hokkaido and during the tourism off-season.

"Business still hasn't returned to normal. It's tough," he said.

The food services industry has also been hit hard, as repeated states of emergency have forced restaurants to close early and stop serving alcohol.

Yoshiki Nishino, a 31-year-old manager at an "izakaya" pub in Toyama on the Sea of Japan coast, lamented the shift to eating at home triggered by the pandemic.

"I'd like to see policies that let people dine out safely and without having to worry about the coronavirus," he said.

Kazunori Miwa, who runs an eatery in Nagoya, central Japan, expressed doubt over whether the government's assertions that restaurants are hotbeds for infection are factual.

"There needs to be a study into why COVID-19 cases have gone down," the 54-year-old said.

Students who entered universities in and around Tokyo have spent much of the pandemic taking online classes due to the states of emergency, giving them little opportunity to consult with professors or meet friends in person.

"I finally feel like a university student," said Yuma Yoshida, who is in his second year at Keio University and had been signing in from his family's home in Aomori, northeastern Japan, before in-person classes resumed this month.

The 19-year-old, a first-time voter, said he believes education is the country's foundation and will be watching the candidates' views on the matter.