Okinawa authorities started removing a massive amount of pumice stones from the coast of the main island Friday that drifted ashore following an underwater volcanic eruption earlier this year, disrupting fishing and tourism.

The removal started at the fishing port of Hentona in Kunigami, a village located in the northern part of Okinawa, with a prefectural government official saying the "unprecedented" operation could take two to three weeks to complete. 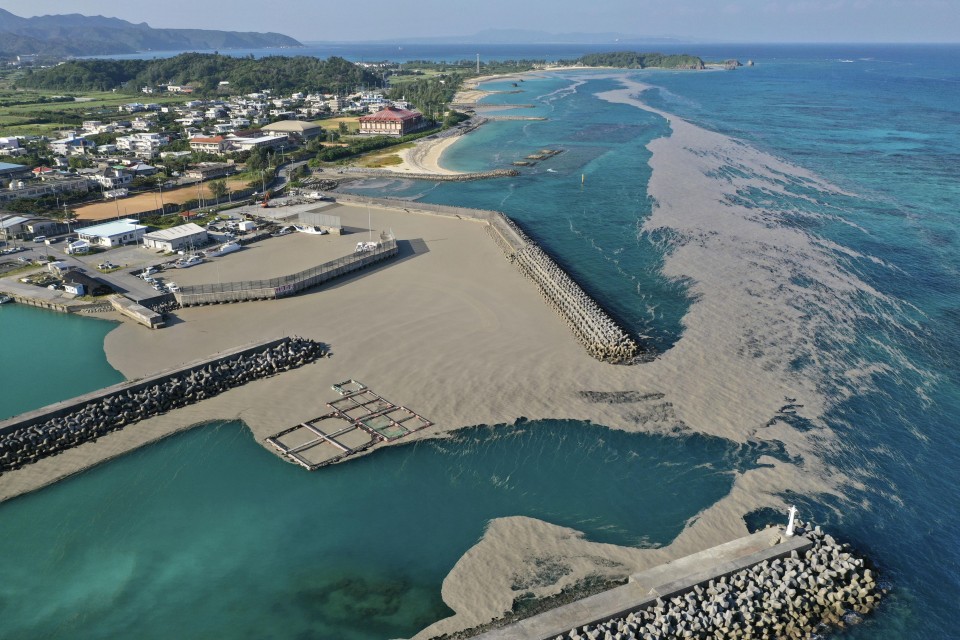 Photo taken from a drone shows pumice stones floating at the fishing port of Hentona in Kunigami, a village in Okinawa Prefecture, on Oct. 29, 2021. (Kyodo)

The port has been swamped with floating pumice stones, making it difficult for fishermen to set out to sea. Two shovel loaders were seen scooping up the stones, which gave the sea's surface a gray appearance as if cement had been poured into the water.

For areas that cannot be reached by such vehicles, the authorities plan to use a boat and put up a fence-like structure to prevent the pollution from spreading further.

"We have no choice but to proceed with the cleanup work by trial and error," the official said. "We will think about how to dispose of the pumice stones after checking safety aspects."

Other coastal areas in the north have also been affected, and the official said the Okinawa prefectural government plans to carry out similar removal operations at other fishing ports.

Prime Minister Fumio Kishida, who was campaigning for this weekend's general election in Kagoshima on Friday, said he had set up a response team to handle recovery efforts and provide financial support to local fishermen.

"Seeing as the pumice on the sea surface could spread to a wide area of Japan, we will continue to deal with the matter carefully," Deputy Chief Cabinet Secretary Yoshihiko Isozaki told a press conference in Tokyo.

Isozaki said the pumice had washed up at 16 fishing ports in Okinawa and Kagoshima with 40 boats damaged, six of which can no longer sail.

The pumice stones are believed to have originated from the Fukutoku-Okanoba underwater volcano, located more than 1,000 kilometers away.

The eruption in August of the volcano in the Ogasawara island chain in the Pacific Ocean was so powerful that it resulted in the formation of a C-shaped isle near Iwoto Island, which is around 1,200 km south of Tokyo.

Since then, pumice stones have also washed ashore in the Amami island chain in Kagoshima Prefecture.