A Japanese-Peruvian man seeking state compensation for mistreatment at the Osaka immigration bureau in 2017 was shown being held face down by a number of officers in security camera footage submitted Wednesday at trial, a lawyer in charge of his case said.

In the case filed with the Osaka District Court, Burgos Fujii, 48, is seeking 2 million yen ($18,000) in damages from the state after he was left handcuffed for over half a day at the Osaka Regional Immigration Services Bureau. 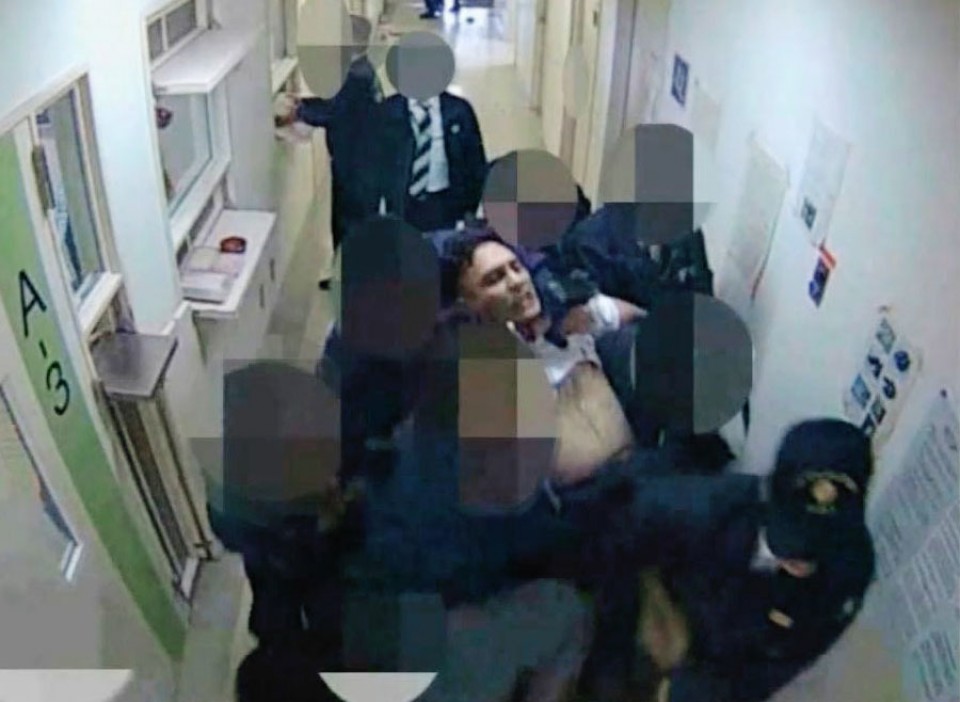 Supplied screenshot of security camera footage submitted as evidence shows Burgos Fujii being hauled off by officers on Dec. 20, 2017. (Photo courtesy of the plaintiff's lawyers)(Faces have been pixelated for privacy reasons)(Kyodo)

The video includes footage of Fujii being hauled off to a solitary cell by many officers, as well as him being held down during tussles with five officers in the middle of the night and lying on the floor handcuffed with his arms behind his back.

Another scene showed an immigration officer intimidating Fujii by asking him whether he was prepared to follow their orders.

At a press conference in Osaka, Maya Kawasaki, one of his lawyers, criticized the treatment as being punitive, adding that it could be considered "torture."

In previous hearings, the government has maintained that no excessive force was used to restrain Fujii. The Osaka immigration bureau declined to comment on the video due to the pending trial.

According to the complaint, Fujii was left with his arms handcuffed behind his back for more than 14 hours on Dec. 20, 2017, after he expressed dissatisfaction with his lunch and became violent. He was later found to have fractured his arm, with the injury taking a month to heal.

Fujii, who was diagnosed with pancreatic cancer after he was allowed provisional release in May last year, was granted special permission Monday to stay in Japan for medical treatment.

The video submitted as evidence in the lawsuit was not shown in court, but his lawyers disclosed some of its content after the court had adjourned.

In a separate case, the Nagoya Regional Immigration Services Bureau last month disclosed edited security camera footage to the family of a Sri Lankan woman who died in March following mistreatment while in detention.