Japanese Foreign Minister Toshimitsu Motegi and his South Korean counterpart Chung Eui Yong on Thursday failed to narrow gaps over a host of bilateral issues including wartime compensation, with both sides repeating their respective positions in their meeting in New York.

Nevertheless, Motegi and Chung agreed to step up communications between the two countries including through diplomatic channels so that Japan and South Korea can improve their soured ties and cooperate in broad areas, Japan's Foreign Ministry said.

The two ministers shared the view that it is necessary "to get Japan-South Korea relations to a normal condition" to move forward on broad cooperation, the Japanese minister told reporters after the meeting. 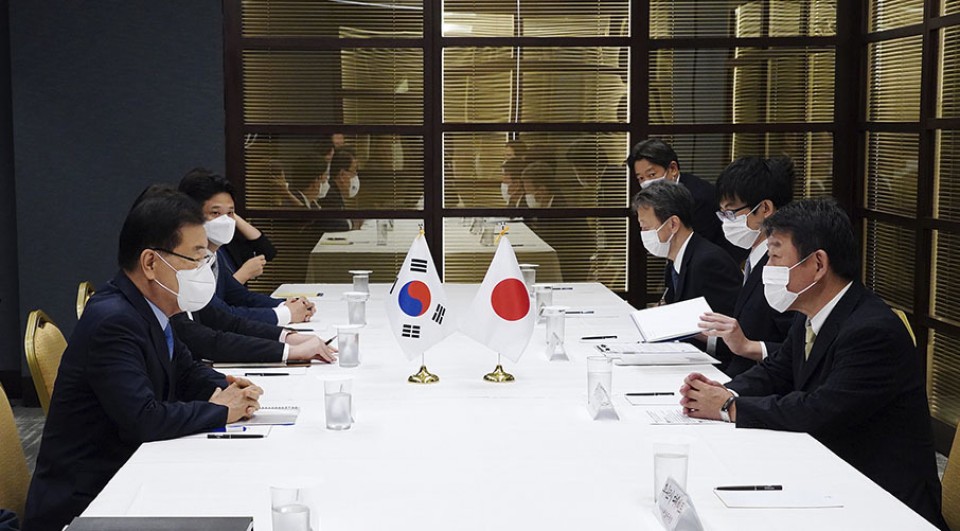 "We had a candid and thorough discussion," Motegi added, noting that the bilateral talks lasted 50 minutes, extending beyond the initially scheduled 30 minutes.

During the meeting held on the fringes of the U.N. General Assembly sessions, Motegi called on South Korea to take appropriate steps over wartime issues such as compensation for forced labor during Japan's 1910-1945 colonial rule of the Korean Peninsula and "comfort women" in Japan's wartime military brothels.

Chung, for his part, repeated Seoul's positions on the matter.

Motegi told Chung that Tokyo will continue to explain its plan on scientific grounds.

The export controls have made it difficult for South Korea to procure materials to produce semiconductors as Tokyo removed Seoul from a list of trusted trade partners.

They also discussed a territorial dispute over Takeshima, a group of islets in the Sea of Japan controlled by South Korea, which calls them Dokdo.

Relations between Tokyo and Seoul, which have been strained for years due mainly to a feud over wartime compensation, deteriorated in particular after the launch of South Korean President Moon Jae In's government in 2017 as he questioned the legitimacy of a 2015 diplomatic accord between Japan and South Korea and reversed the policies of his predecessor.

In a deal reached in December 2015, the two countries agreed to "finally and irreversibly" resolve the comfort women issue between then Japanese Prime Minister Shinzo Abe and South Korean President Park Geun Hye.

Despite a lack of tangible progress on various sticking points, a Japanese government official saw the latest meeting positively, saying the two countries had "a thorough discussion."

When the two ministers met in May on the sidelines of a Group of Seven ministerial gathering in London, their meeting lasted only 20 minutes.