Japan's weather agency warned Thursday that a typhoon set to make landfall in the western part of the country Friday afternoon could bring heavy rain and cause landslides and flooding.

Typhoon Chanthu, this year's 14th typhoon, is forecast to move from the East China Sea to the Tsushima Strait on Friday before crossing from western to eastern Japan over the weekend, the Japan Meteorological Agency said. 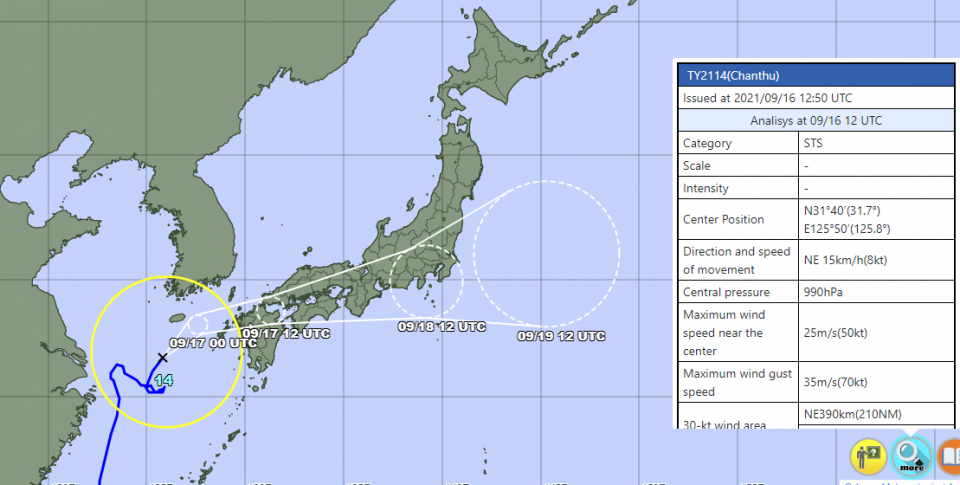 The agency previously forecast that the typhoon would turn into an extratropical cyclone before approaching the southwestern main island of Kyushu.

Western Japan is now expected to be hit by strong winds on Friday, with torrential rainfall forecast for Thursday night through Friday. The typhoon is predicted to become an extratropical cyclone, bringing strong winds and heavy rain to parts of western Japan to northern Japan on Saturday.

As of 6 p.m., the typhoon was located around 330 kilometers west-southwest of Goto, Nagasaki Prefecture, heading north-northeast at a speed of about 15 kilometers per hour. It had an atmospheric pressure of 990 hectopascals at its center, with a maximum gusts of 126 kph, according to the agency.

In the 24 hours through 5 p.m. Friday, rainfall of up to 250 millimeters is forecast for northern Kyushu, up to 200 mm for Shikoku and up to 150 mm in southern Kyushu.