Hong Kong on Sunday held its first election under the new Beijing-imposed electoral system aimed at ensuring that only "patriots" govern the city.

Nearly 5,000 voters representing different professions and industries cast their ballots to fill around 300 seats on the revamped Election Committee, which has been expanded to 1,500 members of whom most have already been chosen.

The powerful committee is tasked with electing 40 members of the enlarged 90-seat Legislative Council in December as well as picking the city's chief executive in March. 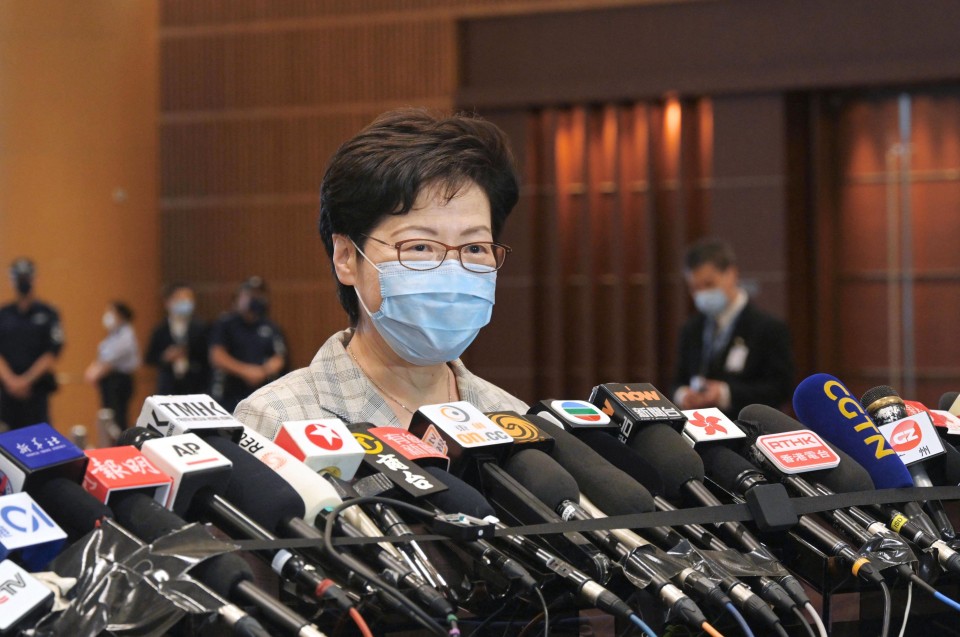 Hong Kong Chief Executive Carrie Lam speaks at a press conference after visiting a polling center for the Election Committee in Hong Kong on Sept. 19, 2021. (Photo courtesy of the Hong Kong government)(Kyodo)

Between 5,000 to 6,000 police officers were reportedly deployed throughout the city to ensure a smooth election, with Police Commissioner Raymond Siu warning that "resolute action" would be taken against those who try to interfere with the election.

Despite ramped-up security efforts, however, the streets have remained peaceful.

"(The police) are wasting their time," a self-employed man told Kyodo News. "Hong Kong citizens are becoming more indifferent to politics." He did not even know that the election was taking place, he added.

Hong Kong's legislature in May approved a sweeping electoral overhaul to oust "unpatriotic" lawmakers in efforts to rein in dissent and bar anti-China elements from governing the city.

This year, however, there are only two opposition members left in the race, leading critics to accuse the government of censoring opposition voices.

Chief Executive Carrie Lam on Sunday dismissed the accusations, saying that people from "all walks of life" were welcome to go into the political system so long as they did not do anything to undermine national security.

"The whole objective of improving the electoral system of the Hong Kong Special Administrative Region is to ensure "patriots administering Hong Kong," she said. "This is a very legitimate objective of any public election in any government."

Lam also addressed the small number of registered voters, which has seen a dramatic decrease from around 250,000 to about 8,000, saying that the voters were now more representative.

In an official blog entry, Hong Kong's Chief Secretary John Lee on Saturday described the election as bearing "special significance" as an important step in implementing the principle of "patriots ruling Hong Kong."

"We will eliminate the previous chaos and political turmoil and return the Legislative Council to rationality," the territory's No. 2 leader added. "Hong Kong will be fitted with new wings and fly once more."