Japan has protested to South Korea over a court order for Mitsubishi Heavy Industries Ltd. to sell assets in the country to provide compensation in a wartime forced labor lawsuit, Foreign Minister Toshimitsu Motegi said Tuesday.

"It is extremely regrettable. Liquidating (the assets) would invite a grave situation for both Japan and South Korea," Motegi told reporters following the Daejeon District Court's decision on Monday.

Mitsubishi Heavy's assets were earlier seized by former plaintiffs in lieu of compensation in a lawsuit they won against the Japanese company, which vowed to immediately appeal the court's latest decision. 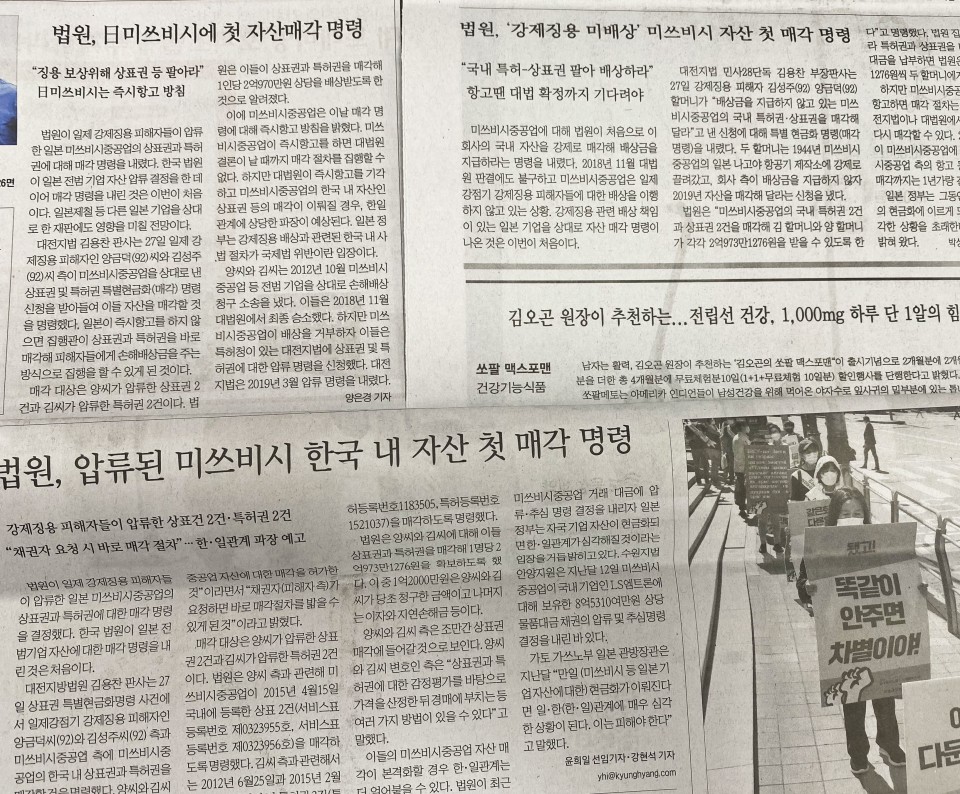 Japan urged South Korea on Monday in Seoul and again on Tuesday in Tokyo to "immediately take appropriate measures" for what it calls "clear violations of international law," according to the Foreign Ministry.

It is the first time that a South Korean court has ordered the sale of a Japanese company's assets in relation to the issue. If the assets are actually liquidated, it will likely deal another blow to already frayed bilateral relations.

Tokyo takes the position that all claims linked to its 1910-1945 colonial rule of the Korean Peninsula were settled under a 1965 bilateral agreement involving financial assistance to Seoul.

"Claiming that it is a violation of international law is unilateral and arbitrary," Choi said in his regular press briefing.

He also reiterated that South Korea has been urging Japan to come to the table for talks to settle the issue, adding that his government is open to any suggestions on solving the problem in a reasonable way.

South Korean President Moon Jae In said in January that the liquidation of Japanese assets in South Korea was "undesirable," showing his preference that a diplomatic solution to the problem be found.

Motegi said Tuesday he told his South Korean counterpart Chung Eui Yong that the sale of Mitsubishi Heavy's assets must be avoided when they met last week in New York on the fringes of the U.N. General Assembly sessions.

The nations have ongoing disagreements over export controls, a dispute that has run since 2019, and South Korea's opposition to Tokyo's planned discharge into the Pacific of treated radioactive water from the disaster-hit Fukushima Daiichi nuclear power plant.