Ann Van Hine, 67, has shared her personal stories of losing her firefighter husband in the Sept. 11 terror attacks in 2001, serving as a volunteer tour guide at the Ground Zero site in New York for more than 15 years.

This was not the life she imagined for herself. But she is grateful for the support she has received along the way and how her experiences have hopefully helped others, including survivors of Japan's triple disaster in 2011, withstand traumas of their own. 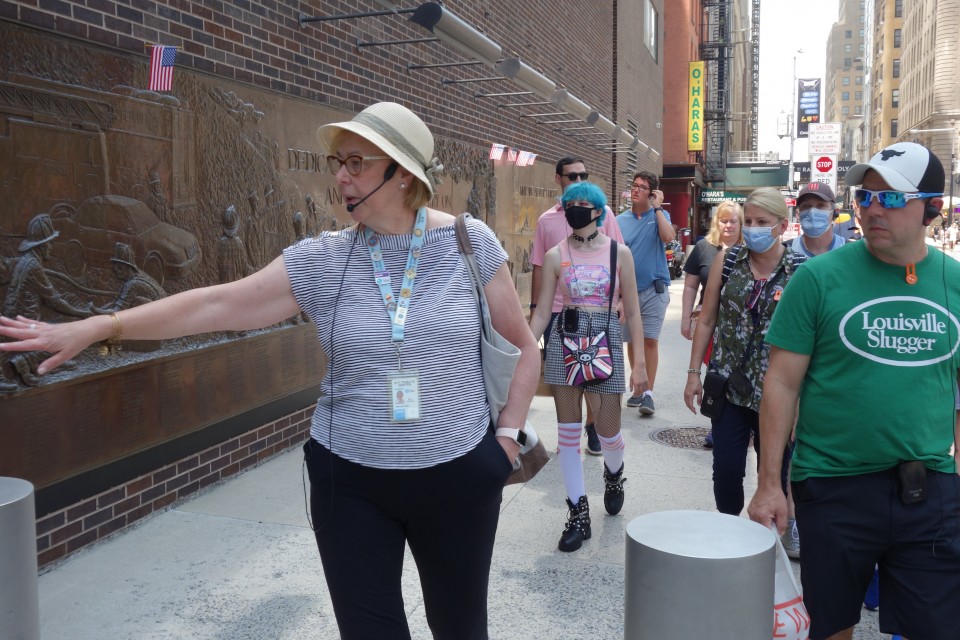 As the world continues to grapple with the coronavirus pandemic and fears of terrorism persist, Van Hine hopes the 9/11 stories she and her fellow docents are telling will serve as an example of people coming together to rise to life's challenges.

"When I started (volunteering), I never thought I'd be doing it for all these years," Van Hine said during an interview ahead of the 20th anniversary of the terror attacks. "I never thought it would lead to all the things that it has led to, like going to Japan."

The Brooklyn resident is among the more than 1,000 volunteers sharing their personal stories within a small museum in New York City, run by an association involving the 9/11 victims' families, and during tours of the nearby national memorial. 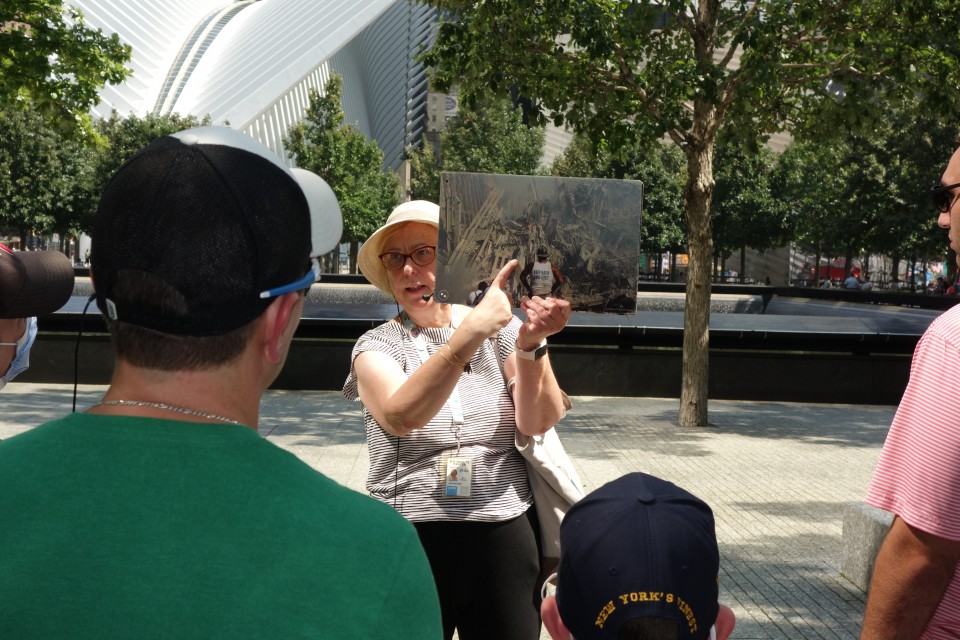 The guides are family members who lost loved ones, survivors, rescue and recovery workers, area residents and others directly affected by the attacks. According to the 9/11 Tribute Museum, 500,000 visitors have taken the walking tours so far.

But she knew she could talk about her husband Richard, more commonly known as Bruce, and what she has gone through since that day.

During the 75-minute walking tour, she has taken participants to a memorial wall dedicated to 343 New York City firefighters who died on Sept. 11, 2001, as they tried to save the lives of others, and to the two memorial pools standing in the footprints of the twin towers. 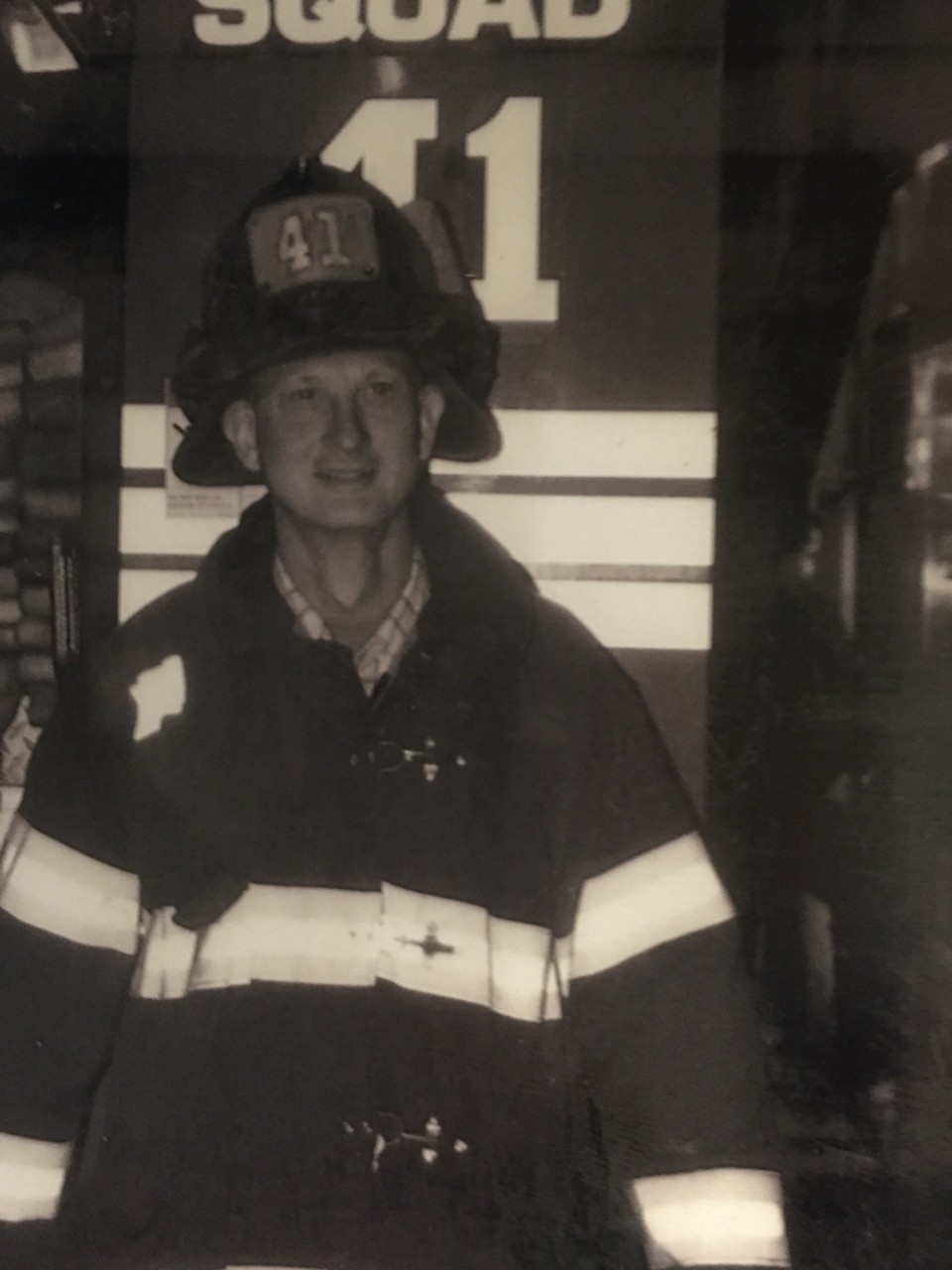 "Sept. 11 was just like such an ordinary day," Van Hine said during a tour last month. She recalled how she had been "very excited" since she had the day to herself, with Bruce on duty, her two daughters back in school, and dance classes yet to resume at a studio she owned.

As she heard the news of the planes hitting the World Trade Center on her car radio, she was sure her 48-year-old firefighter husband would be sent to the scene of destruction unfolding in lower Manhattan.

"The fire department would end up coming to my home just about midnight to tell me that he was unaccounted for," she said, speaking to about a dozen tour participants.

Van Hine had lived with the possibility that her husband could die in the line of duty. But for him to be pronounced dead without his body being located was beyond her imagination.

It was only in March 2002 that Bruce's body was finally found amid efforts to remove the massive debris piled up at Ground Zero. His death certificate listed the manner of death as "homicide" and the immediate cause of death, "blunt head trauma," confirming him as one of the victims who died when the 110-story twin towers came crashing down.

During the tours, Van Hine also talks about her family moving on, with her daughters going to college and getting married, and how people can support each other through tragedies, sometimes with a simple act of compassion.

"After Sept. 11, I received hundreds -- and that's not an exaggeration -- of cards in the mail...Some of them were a picture a five-year-old had drawn, some of them were just a note saying 'We prayed for your family,'" she said.

"I can tell you that all of those cards made a difference in my life," she told the tour participants.

For Van Hine, recounting her stories was also therapeutic. "Sometimes, what you're going through, you just need to say it out loud," she said during the interview.

While she has become emotional on a handful of tours in the past, she describes the role as "fulfilling," especially since she has been able to develop friendships with other guides and meet people from all over the world. 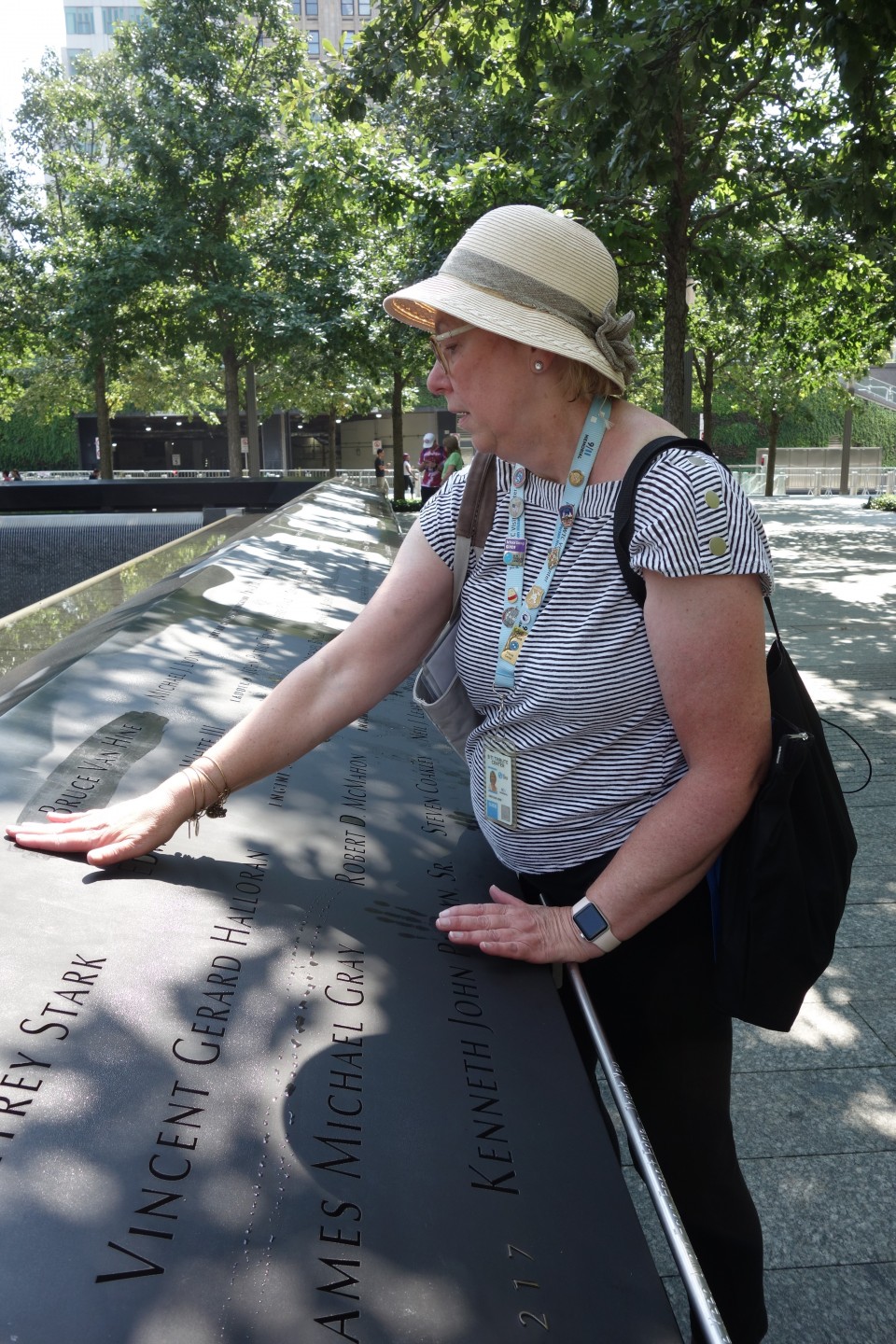 Ann Van Hine moistens with water her husband's name engraved on the national memorial honoring the victims of the terror attacks on Sept. 11, 2001, on Aug. 25, 2021, in New York. (Kyodo)

As a Tribute volunteer, Van Hine also had chances to travel to Japan four times as part of what has become an annual outreach program with people affected by the magnitude-9.0 earthquake on March 11, 2011, which set off a tsunami and triggered the world's worst nuclear disaster since the 1986 Chernobyl crisis.

The project started in 2012, as Tribute co-founder Lee Ielpi, who lost his firefighter son in the terror attacks, thought that the 9/11 community might provide support to the 3/11 survivors by sharing their own experiences of tragedy, loss, and recovery.

Disaster psychiatrists in the United States and Japan were initially skeptical about the idea, said Robert Yanagisawa, president of the Japanese Medical Society of America, who played a crucial role in facilitating the program.

"It's obviously a disaster of a different nature, different language, different culture...So we really had no idea actually whether this would work at all," said Yanagisawa, a doctor with expertise on thyroid cancer.

"We often talk about how for emotional well-being and everything that it is okay to talk, it is okay to cry...yet it's very difficult to show that unless you feel this sort of connection," he said. The hurdle was expected to have been higher as Japanese people tend to be hesitant to openly display emotions or speak up.

There were also concerns about whether the 9/11 members could get their emotions across through translation. But Yanagisawa said the outcome was "quite amazing," as he witnessed a strong bond forged between the two groups.

While the original idea had been to deliver hope to the 3/11 survivors, Van Hine said she was also encouraged by seeing the positive changes in the Japanese people living through the triple disaster over the years.

Initially, she thought many people were operating on "autopilot," still reeling from the shock, just as she had been after losing her husband. Most of the talking was done by the 9/11 members, she said.

But "by the fourth time I went (in 2018), we were hardly talking at all, because they had set up docent programs and they were sharing their stories," she said.

Van Hine said the trips made her feel that "what I've gone through isn't wasted because I can help somebody else."

"We didn't have any answers for them really. We just were able to say, 'You know what? It's been this many years for me, I'm just a little further down the road than you are.'"

Although the outreach shifted online from 2020 due to the pandemic, the two groups affirmed during a recent virtual event how they hope to carry on making strides together. 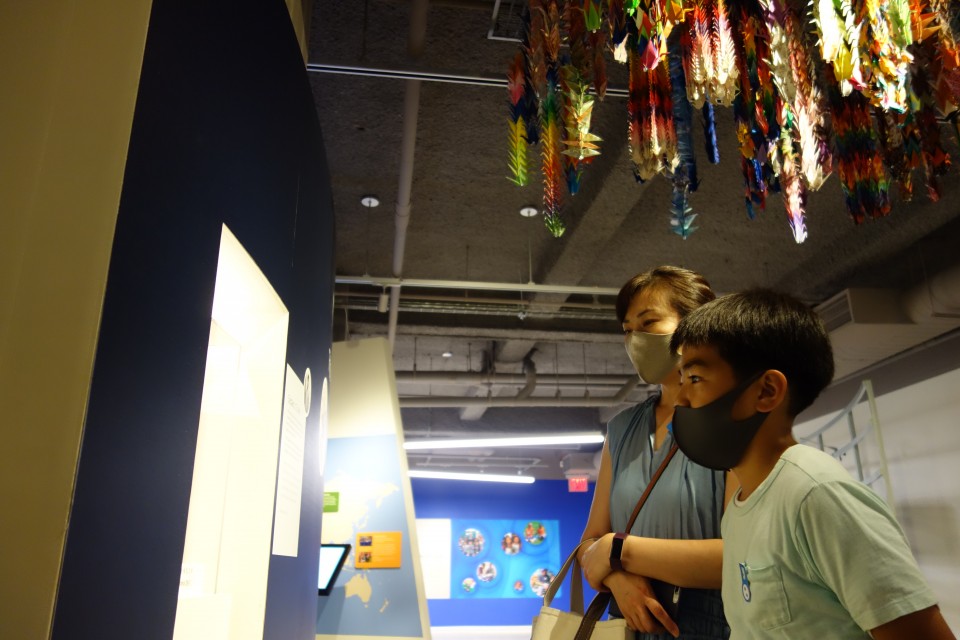 Looking ahead, Van Hine believes the 9/11 stories will continue to carry important messages.

"I think what I want in 10, 20 years, like the 50th anniversary, is for people to realize that, first of all, those were still people that died -- people with stories, not just numbers," she said.

The other lesson that she wants people to reflect on is how the United States and the rest of the world "came together" following the attack on American soil 20 years ago that killed people from more than 90 countries, including 24 Japanese.

The spirit of coming together and the resolve to help others was also behind the initiative to reach out to the Japanese people during their time of hardship -- even though it was not clear at first whether anything would come of those efforts, she said.

"That's the kind of thing that will help to stop terrorism," said Van Hine, who believes that the "bottom line" when it comes to the 9/11 attackers is that "they were taught to hate."

Father of Japanese 9/11 victim to publish translation of U.S. report