The Paralympic "agitos" symbol was removed from Tokyo Bay on Monday, a day after the games for athletes with impairments closed at the National Stadium, signaling the end of the Japanese capital's hosting of the games.

The red, blue and green crescents that make up the Paralympic symbol had been sitting on a barge at Odaiba Marine Park since before the 13-day global sporting event. 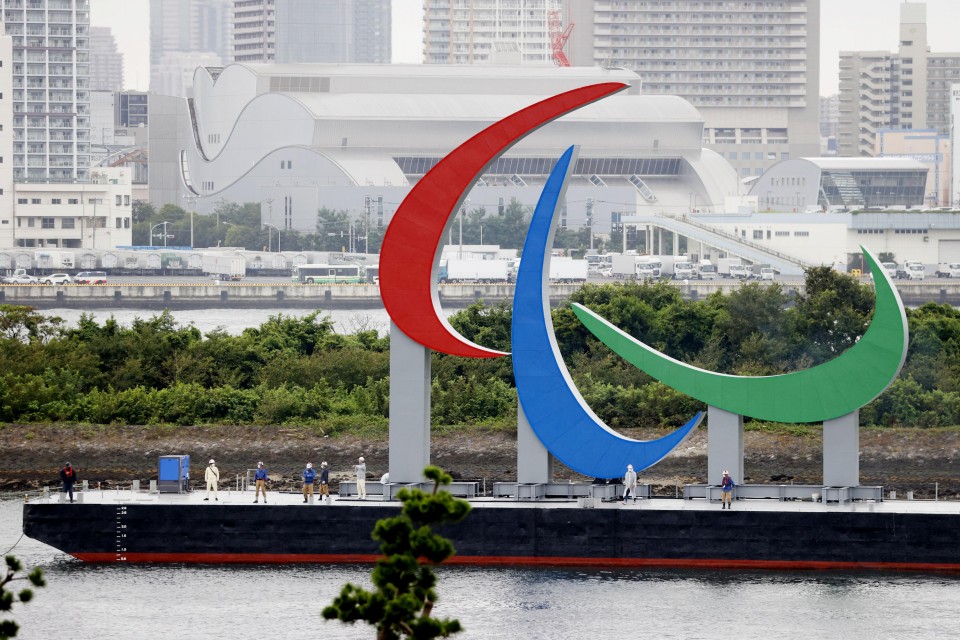 Work is under way to remove the Paralympic "agitos" in Tokyo's Odaiba waterfront area on Sept. 6, 2021, a day after the closing ceremony of the Tokyo Paralympics. (Pool photo)(Kyodo)

At around 10:30 a.m., the barge carrying the 94-tonne installation, which is 23.4 meters long and 17.5 meters tall, was towed away by a tug boat toward Yokohama, where it was built and where its materials will be recycled.

Lit up at night, the Paralympic agitos were unveiled to the public ahead of the Paralympics, which started on Aug. 24 and ran through Sunday. They replaced the Olympic rings that stood in the spot in the lead-up and through the Olympics held between July 23 and Aug. 8.

"Although there were many opinions opposing (the games), I was encouraged by the athletes' efforts. I'm going to miss the games now that they are over," said Yasumoto Takei, 43, who was watching the agitos being removed.

Also on Monday, athletes and officials from overseas were seen leaving the athletes' village in Tokyo's Harumi waterfront district to make their way home, with some waving at photographers as they departed on buses.

A 44-year-old woman who lives near the athletes' village said, "I feel both a little sad and relieved that I won't be able to see this sight anymore."

At Narita airport near Tokyo, many athletes from overseas formed queues at check-in counters. Some could be heard saying "arigato," which is thank you in Japanese, to people around them while passing security checkpoints.

Meanwhile, at a square outside of JR Tokyo Station, workers took down "Tokyo 2020" flags that had been hanging from street light poles.

"I'm sad (the games) are over. Although it is difficult under the coronavirus pandemic, I hope the Olympics and Paralympics can be used as a model case for other events to be held," a 48-year-old man from Yokohama said.

Both events were held after a one-year postponement due to the global health crisis, forcing organizers to ban spectators from most venues.