Freelance photographer Maiko Kuzutani has been drawn to taking photos of disabled children with their loving parents for years -- ever since the time in college when she was shocked to learn how many mothers in Japan choose to abort children with disabilities such as Down syndrome.

Although most of her family photos are of subjects without disabilities, the images of disabled kids smiling with their parents hold a special place in her heart because of the true joy that she can see they bring to their families. 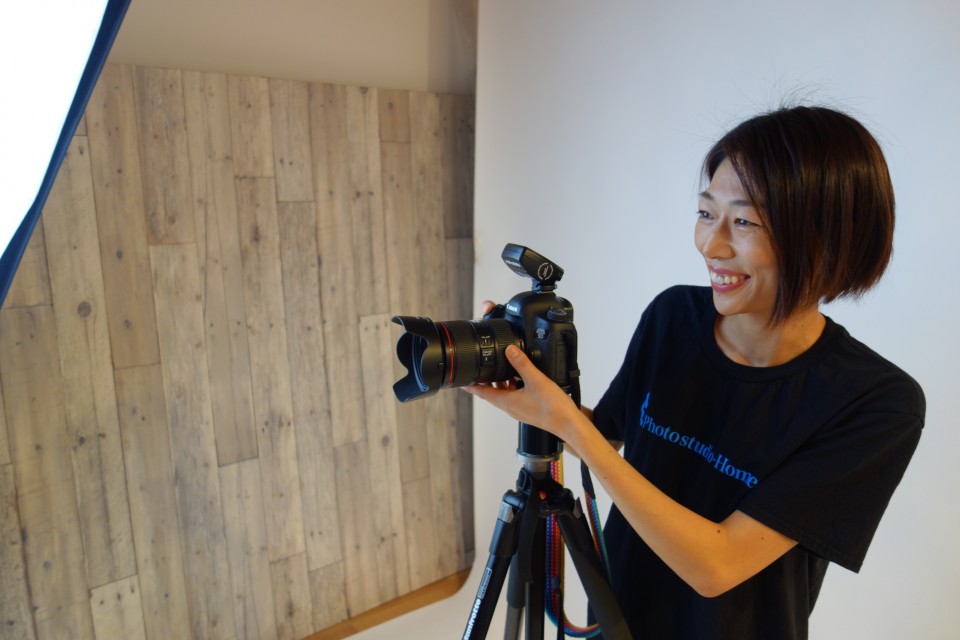 Photographer Maiko Kuzutani holds her camera at her photo studio in Yokohama on Sept. 5, 2021. (Kyodo)

It is that joy, rather than the suffering many may assume such families experience, that she hopes to convey to society at large and prospective parents in an exhibition later this month in Tokyo's Ginza district.

The idea of taking such photos began to form when she was studying photography in college in 1998 after she read an article about prenatal genetic testing in Japan. It said a large percentage of women abort their pregnancies after discovering their babies may have disabilities such as Down syndrome.

Kuzutani was left pondering how she might shine a light on such children, born in a society that appeared not to value them as highly as other children out of ignorance or fear, and convince people of the importance of their existence through her photos.

The article particularly hit home for Kuzutani because her closest friend at nursery school had been a boy with Down syndrome, a genetic disorder that is often accompanied by slow physical growth and intellectual disabilities.

"I was not good at speaking back then and could not play with others my age, but he stayed by my side without saying a word," Kuzutani said, referring to her childhood friend. "It was because of such an experience that I thought I don't want kids with Down syndrome to disappear from this world."

Now 44, Kuzutani aims to show how well such children grow up when surrounded by caring parents, hoping her photos can help persuade mothers-to-be not to resort to aborting disabled children.

One of her first photo shoots was of a girl named Mai Sekine, now 29, a first-grader at the time with Down syndrome whom she had been introduced to by a child rehabilitation facility in Tokyo. 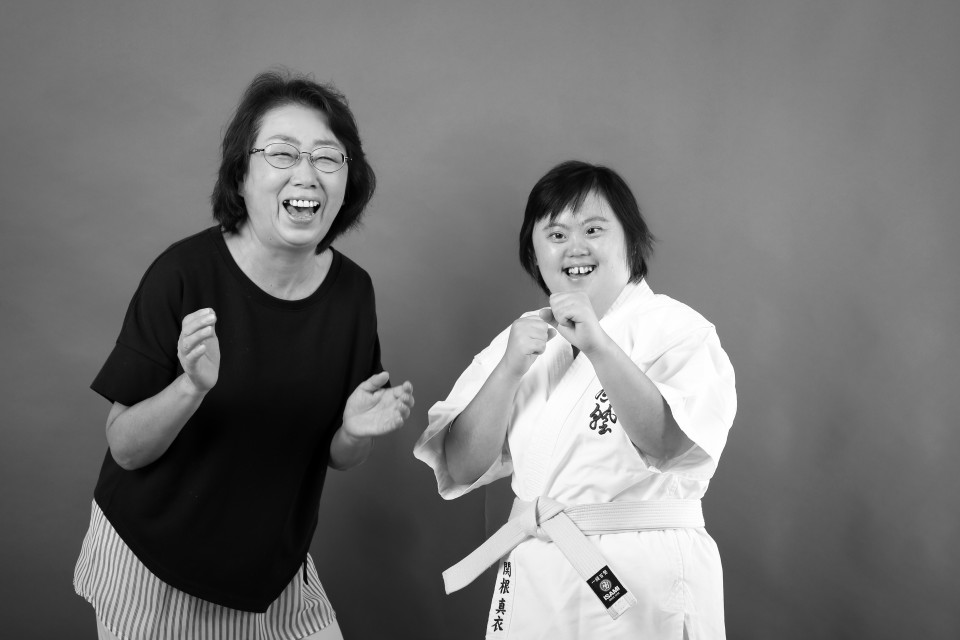 Supplied photo shows Mai Sekine (R) and her mother Hitomi posing in a photo taken by photographer Maiko Kuzutani at her photo studio in Yokohama on Sept. 22, 2020. (Photo courtesy of Maiko Kuzutani)(Kyodo)

Kuzutani would sometimes dine with Mai and her family, spend nights at her home and follow her to school to take photos, which she won an award for in 2001, leading to her first solo exhibition.

Mai's mother, Hitomi, 65, recalled Kuzutani quickly getting along with her daughter and treating her like a "little sister."

"At first, she just played with Mai and didn't take pictures of her until Mai got used to her," the mother said. Kuzutani still takes Mai's photos on occasion, with the daughter-mother pair featuring among the several pictures of persons with intellectual and physical disabilities in her latest exhibition.

In 2012, Kuzutani was approached to take pictures of Mai and others with disabilities when their parents held a party to celebrate their Coming of Age Day, an annual holiday in Japan for those turning 20.

"After seeing how she took pictures of our children smiling at the party, we encouraged her to open a photo studio so we can visit," Hitomi said.

Kuzutani had not considered opening a studio at the time but changed her mind when the parents explained to her how it was often difficult to get quality photos of their children, some of whom are autistic and have intellectual disabilities, at general photo studios because of the patience and time required to conduct a shoot.

"I was able to become a photographer with the help of Mai and parents of children with disabilities. I wanted to return the favor for those who were having a hard time taking good pictures of their children on special occasions," Kuzutani said.

In 2013, Kuzutani opened a photo studio in Yokohama, where she built a home. She only accepts two groups a day, allowing her time to get to know her subjects -- something she sees as particularly important when she takes portraits for families with disabled members.

One day, she met a girl with a severe intellectual disability who ignored her at first and sat alone on the stairs in her studio. But the girl gradually loosened up, allowing Kuzutani to take photos of her and her parents smiling together. The girl gestured by touching Kuzutani's hand as she left the studio.

"Others may think dealing with such children is trouble since I can't start shooting right away, and it takes so much time to do my job. But to me, this is the fun because it's part of the communication process," Kuzutani said. 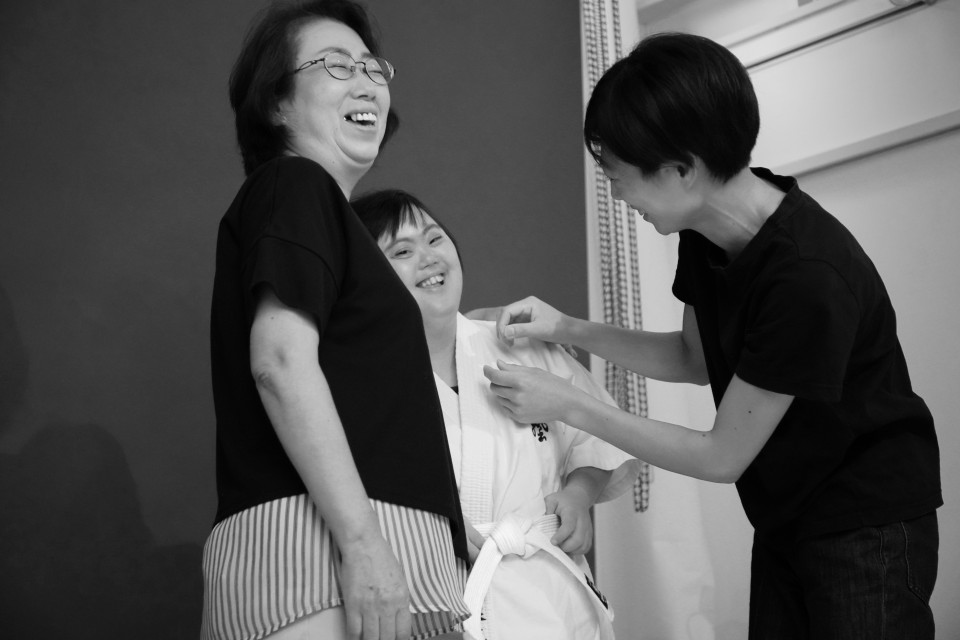 She had initially wanted to wait for the coronavirus pandemic to end before holding her current exhibition, which features 29 family shots of a parent with a disabled child. But after being diagnosed with breast cancer in February, she felt she did not have time to wait.

"After undergoing surgery in May, I thought I would never know when my life might end, so I should do whatever I want to do now. My models also were waiting for the exhibition to be held," she said.

Hitomi was devastated when a doctor told her after she gave birth that Mai would not survive the year because her organs were too weak. But Mai now works at a welfare workshop on weekdays and takes karate lessons.

"Mai grew up to be a caring woman who wants to offer help when she sees people are in trouble," Hitomi said. Though Mai still has health issues, "I now think that it's a blessing just for her to be alive."

For Kuzutani, the smiles on the families' faces say it all -- although there was a time many of the parents used to cry and could not even tell their relatives about their disabled children.

The parents, Kuzutani said, "grew up with their children, who have taught them various things (about life)," adding that she hopes that people who think they have no connection with disabled children also come to her exhibition.

"I want to show people that being born with a disability does not mean misfortune for them or their families," she said.