A small furniture company located in rural Hokkaido was tasked with making the protective wooden cases used to store medals won by athletes at the Tokyo Olympics and Paralympics -- a delicate work of craftsmanship that also involved facing the challenge of the one-year postponement of the games due to the coronavirus pandemic.

Created by Yamagami Mokko, which has only 19 employees, in the town of Tsubetsu on Japan's northernmost main island, the circular case is made of wood from locally sourced Japanese "tamo" ash wood. 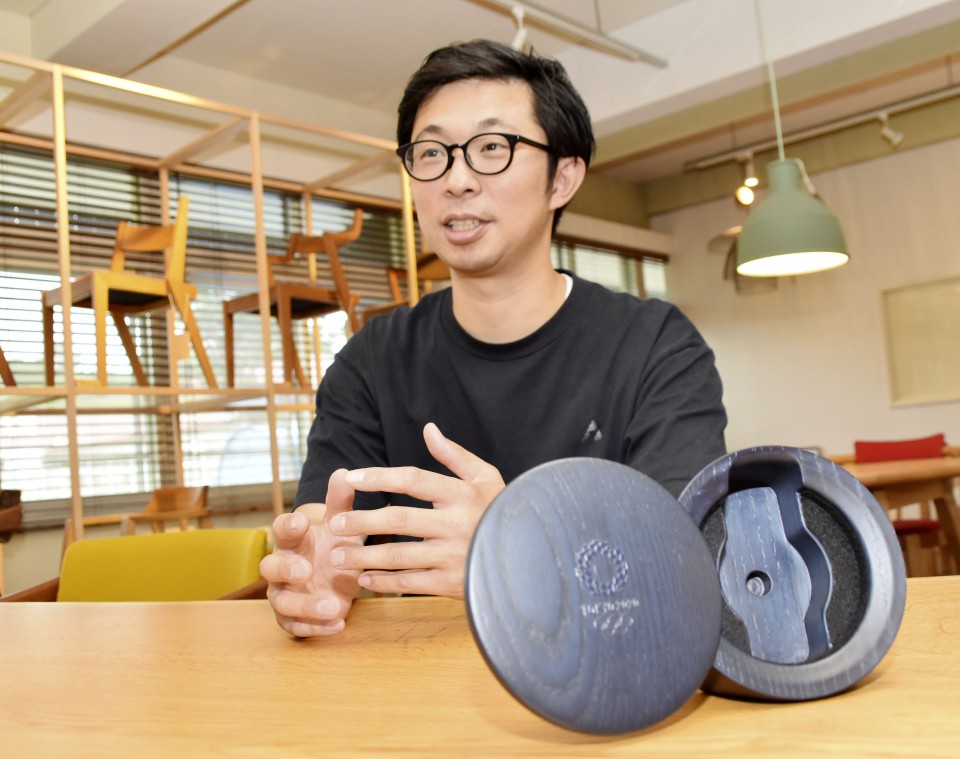 Photo taken on Aug. 9, 2021, shows Yuichiro Yamagami speaking about creating the medal case (front) for the Tokyo Olympics and Paralympics at his furniture company in Tsubetsu, Hokkaido Prefecture. (Kyodo)

Measuring 12 centimeters across and 6 cm in thickness, the cases are dyed indigo blue, regarded as "the color of victory," according to Yuichiro Yamagami, the company's 37-year-old senior managing director.

Including the Tokyo Olympics, which saw a medal rush for Japan, and the Paralympics, around 5,000 of the medal cases were created in all -- a source of pride for a firm in such an out-of-the-way part of Japan.

It was able to create "something world-class as a representative of Japan even from this regional area," Yamagami said.

As no nails or screws are used, the lid and case, embedded with small magnets in both, fit snugly together to close, and the top slides to the side when it is opened. Workers at Yamagami Mokko adjusted the position and depth of the magnets to be fitted in 0.1-millimeter increments so that the lid and case slide smoothly. The fine detail, such as polishing the medal case to highlight the wood grain, was primarily done by hand.

Fencer Masaru Yamada, a member of the Japanese men's epee team that won the country's first-ever fencing gold medal in the Olympics, posted an image of the medal case on Twitter while praising its "fine, sturdy" craftsmanship.

Founded in 1950, Yamagami Mokko manufactures its own brand of chairs for the domestic market and has also exported its products to Hong Kong and France, among other places.

The company obtained the medal-case order in March 2019 in a public offering, winning accolades for its technical capabilities.

Although it immediately began work, there were difficulties in production, including problems with evenly dyeing the medal case. Because of limited staffing, there were days when employees would toil late into the night.

There was even concern they might not finish the work in time for the games but, says Yamagami, they were highly motivated to produce a top-quality case as "a made-in-Japan product."

With the work completed around March 2020, Yamagami recalled sleeping next to the cardboard boxes containing the medal cases for about a week before shipment because of his fondness for them.

Then, with the one-year postponement of the Olympics and Paralympics due to the coronavirus outbreak, Yamagami and others began to worry about whether temperature, humidity and other factors might cause deterioration in the quality of the medal cases.

But they were able to prevent such an eventuality, getting help from the Tokyo organizing committee to obtain preservatives and other agents, often used in museums, to maintain the quality of the medal cases.

As the debate continued on whether to even hold the Olympics and Paralympics with the pandemic raging and the public deeply concerned about safety, Yamagami said, "We finally saw the light of day" when the Olympics kicked off on July 23.

"We understood why people called for canceling the games, but we also didn't want to think about all our efforts being for nothing," Yamagami said.

Seeing footage of medal winners holding the cases during the games, he said, "I felt as if I were giving my daughter's hand away in marriage," though Yamagami has no daughter.

Tsubetsu, in the eastern part of Hokkaido, has a population of roughly 4,400, fewer than the number of medal cases Yamagami Mokko produced for the games.

"We will be happy if many people learn that even a tiny company in a small town can make things it can boast about to the world," Yamagami said.