FEATURE: Japan seeks to remember its war dead as individuals in new memorials

Efforts are under way to give a human face to Japanese casualties in World War II and immediately preceding conflicts by reading their names aloud in a new type of memorial service, despite the difficulty of identifying all individual war dead. 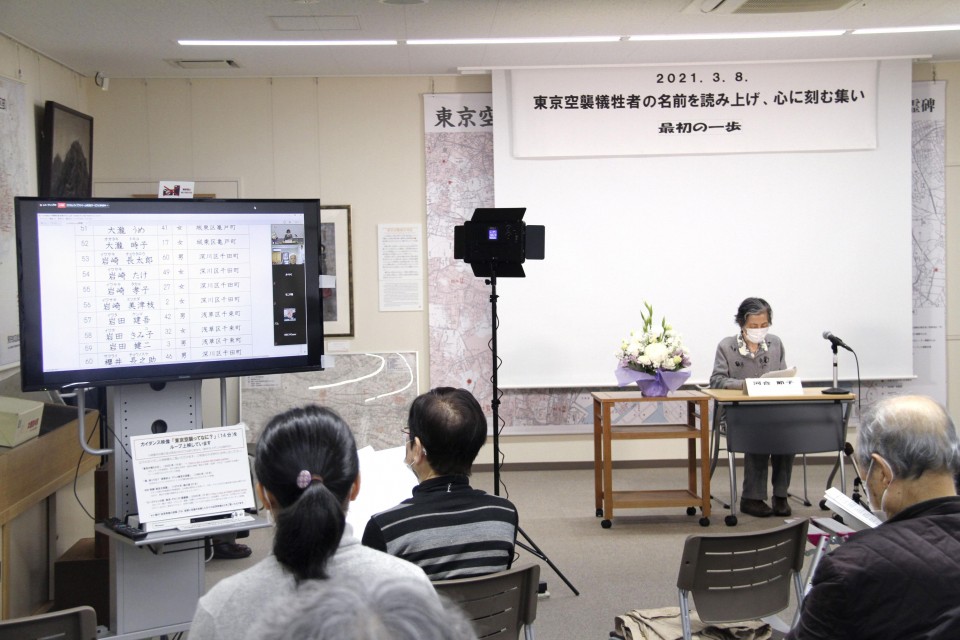 File photo shows a memorial ceremony being held at the Center for the Tokyo Raids and War Damage in Tokyo's Koto Ward on March 8, 2021, to commemorate the war dead from the bombing of Tokyo during World War II. (Kyodo)

But determining the name of each military and civilian casualty is a monumental task. In many cases, there were no remains, making it impossible to investigate the circumstances behind the deaths.

Still, experts are urging the government to take the initiative to investigate further before time runs out, with few survivors left who are able to shed light on what happened 76 years after the conclusion of the war.

"Mr. Haruji Otani, Mr. Hisayoshi Otani..." These were peoples' names being read out during a videoconference memorial event in late August. They were among soldiers and civilians who died in internment camps or while engaged in forced labor in Siberia, among other areas in the former Soviet Union, as well as Mongolia, following WWII.

Roughly 100 surviving family members and volunteers spent 46 and a half hours reading aloud the names of some 46,300 people.

Undeterred by the coronavirus pandemic, the Tokyo-based organizer, which is a support and documentation center for Japanese former prisoners of war and civilian internees held by Soviet forces after WWII, began the readings last year as an expression of mourning for those who lost their lives.

According to the Ministry of Health, Labor and Welfare, of the approximately 575,000 Japanese held by the Soviet Union, some 55,000 died in captivity.

"It really hits home to know that so many people died," said Daiki Hama, a 21-year-old university student from Tokyo who read aloud 500 of the victims' names at the memorial ceremony. 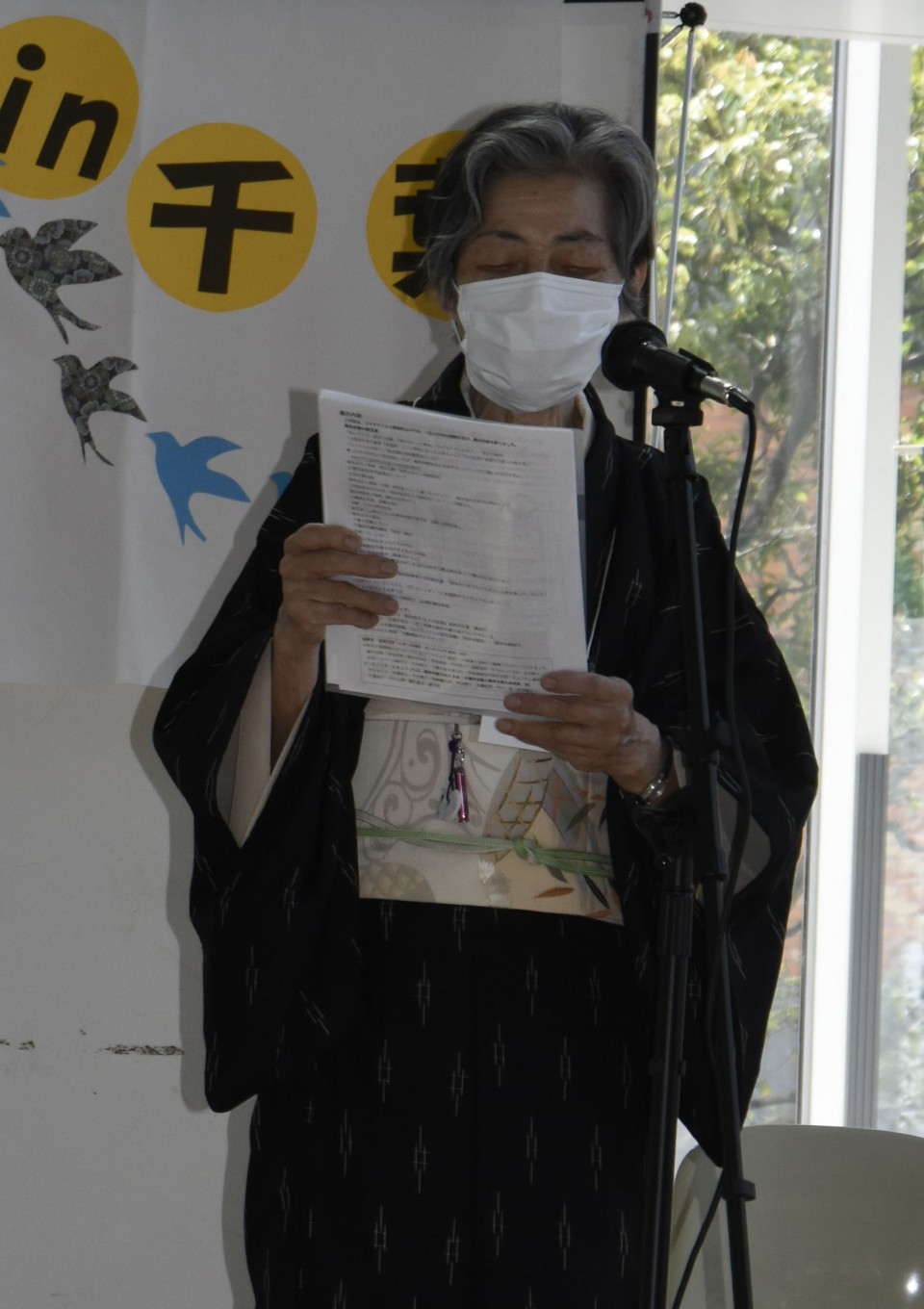 Setsuko Kawai speaks at a peace event in Chiba on June 12, 2021, where the names of the war dead from the Chiba air raids during World War II were read aloud. (Kyodo)

During a gathering in March ahead of the 76th anniversary of the March 1945 overnight Tokyo air raid conducted by the United States, about one hour was spent reading out the names of 410 victims in a ceremony mourning the more than 100,000 civilians who were killed. Dubbed the "bombing of Tokyo," it was the single most destructive firebombing raid in human history.

Setsuko Kawai, 82, from Chiba, near Tokyo, who lost her mother and two younger brothers in the bombing, played a major role in getting people to attend the event. Each victim had a life, their own family, and most of all, a name, she said.

"You can't understand this if you lump 100,000 people together as one. My hard-working mother, my brothers who would fight each other over a tricycle, everyone had a name," Kawai said.

In June, at Kawai's suggestion, a memorial event was also held in Chiba to introduce 725 people who died in air raids in the city. "We were able to think about each one of their lost lives," said Mariko Ichikawa, 69, who heads a group dedicated to remembering Chiba's war experience.

Nevertheless, the names of some of Japan's casualties may never be known. For example, of the roughly 15,000 people who died in air raids in Osaka Prefecture, western Japan, the names of only just over 9,000 have been confirmed. 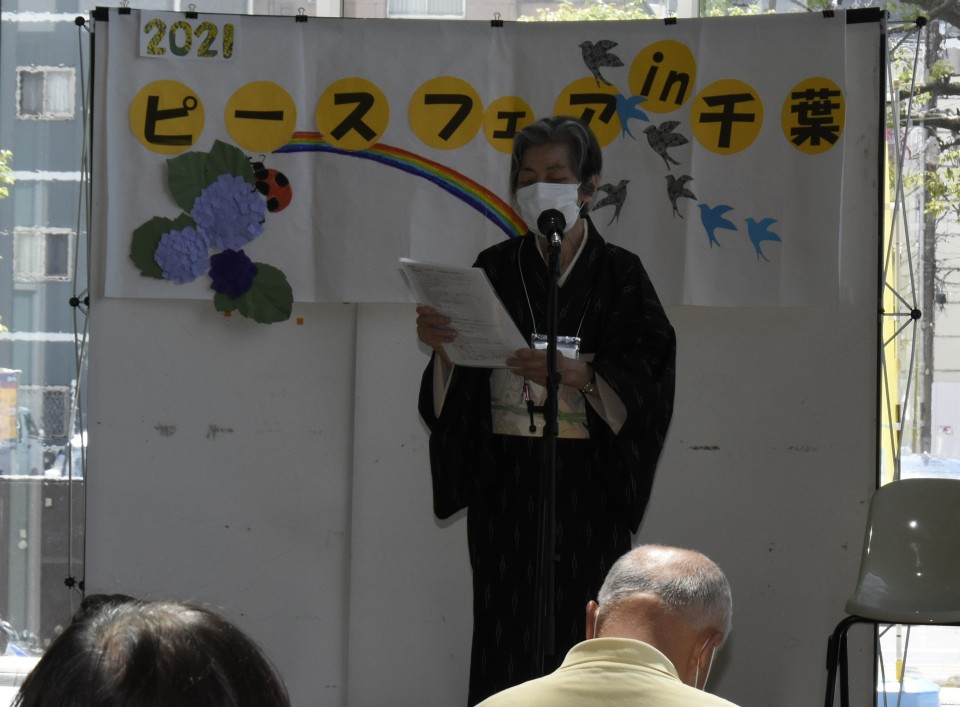 Setsuko Kawai speaks at a peace event in Chiba on June 12, 2021, where the names of the war dead from the Chiba air raids during World War II were read aloud. (Kyodo)

Utako Komai of the Osaka International Peace Center, which discloses the names of war casualties, suggested this reality needs to sink in to understand the depth of the problem. "I want people to understand that there are 6,000 names of people we still don't know," Komai said.

Professor emeritus Yasunori Oda, a specialist in Japanese modern history at Osaka Electro-Communication University who researches the former Sanadayama Army Cemetery in the city of Osaka, says that even for military personnel and civilian employees under state control, the number placed in group burials as the war situation deteriorated does not represent the true scale of deaths.

"Leaving behind the person's name is to recognize the individuality of the person. The government has to take responsibility for having mobilized its citizens into the war," Oda stressed.

The government should initiate an investigation, and if any archive material can lead to identifications being made it should be made public, he said.