Japan's Tomoa Narasaki fell to fourth in the men's combined sport climbing on Thursday at the Tokyo Games, one mistake costing him the gold medal as 18-year-old Spaniard Alberto Gines Lopez won in the sport's Olympic debut.

Narasaki, the reigning combined and bouldering world champion, ranked second in the speed discipline, third in bouldering and sixth in lead, scoring 36.00 points in total at Aomi Urban Sports Park on Tokyo Bay.

Gines Lopez won the speed, finished seventh in bouldering and fourth in lead to score 28.00. Nathaniel Coleman of the United States came sixth, first and fifth, respectively, to score 30.00 and take silver. 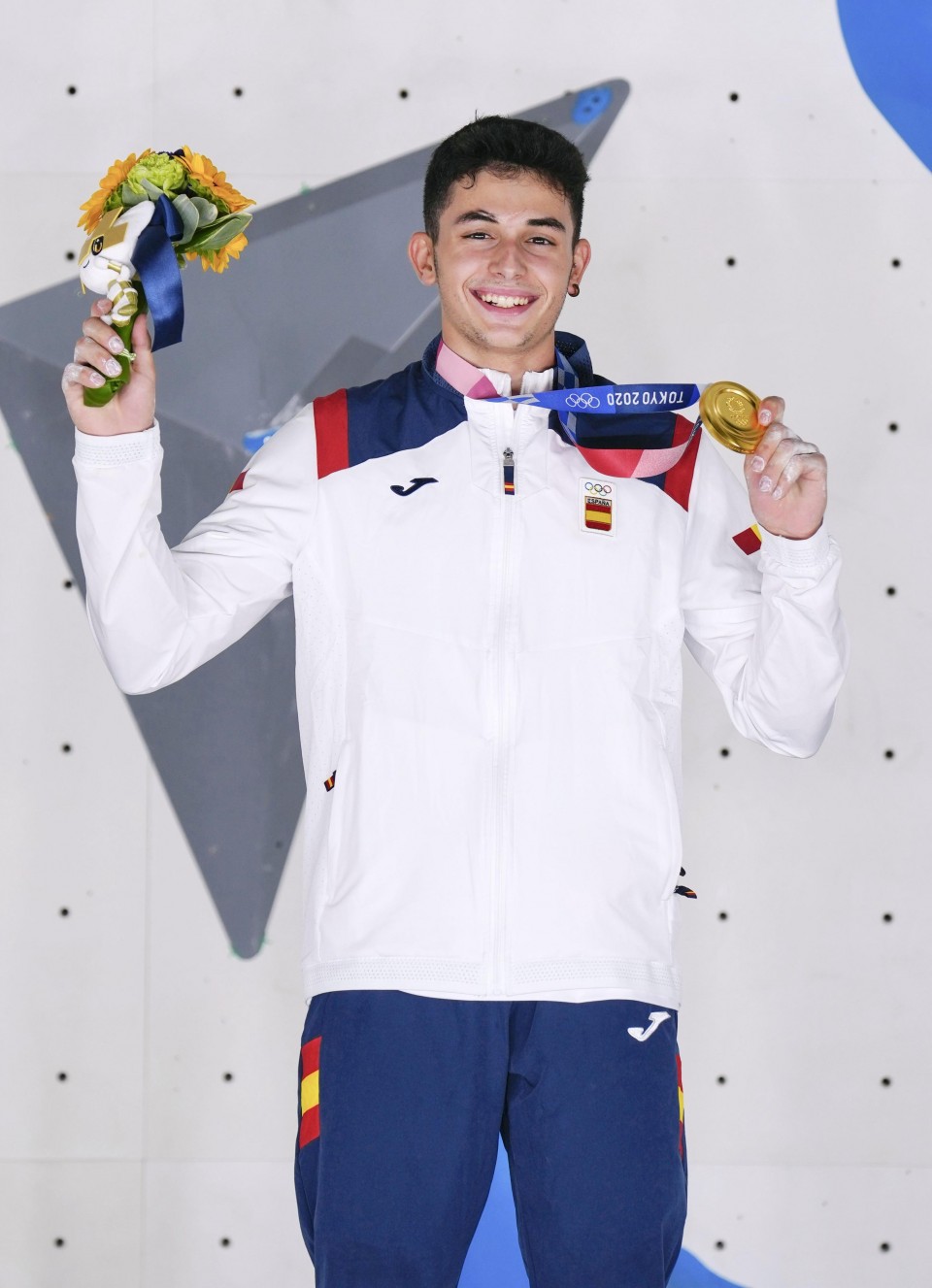 Alberto Gines Lopez of Spain poses with his gold medal in the men's sport climbing combined at the Tokyo Olympics on Aug. 5, 2021, at Aomi Urban Sports Park in Tokyo. (Kyodo) ==Kyodo 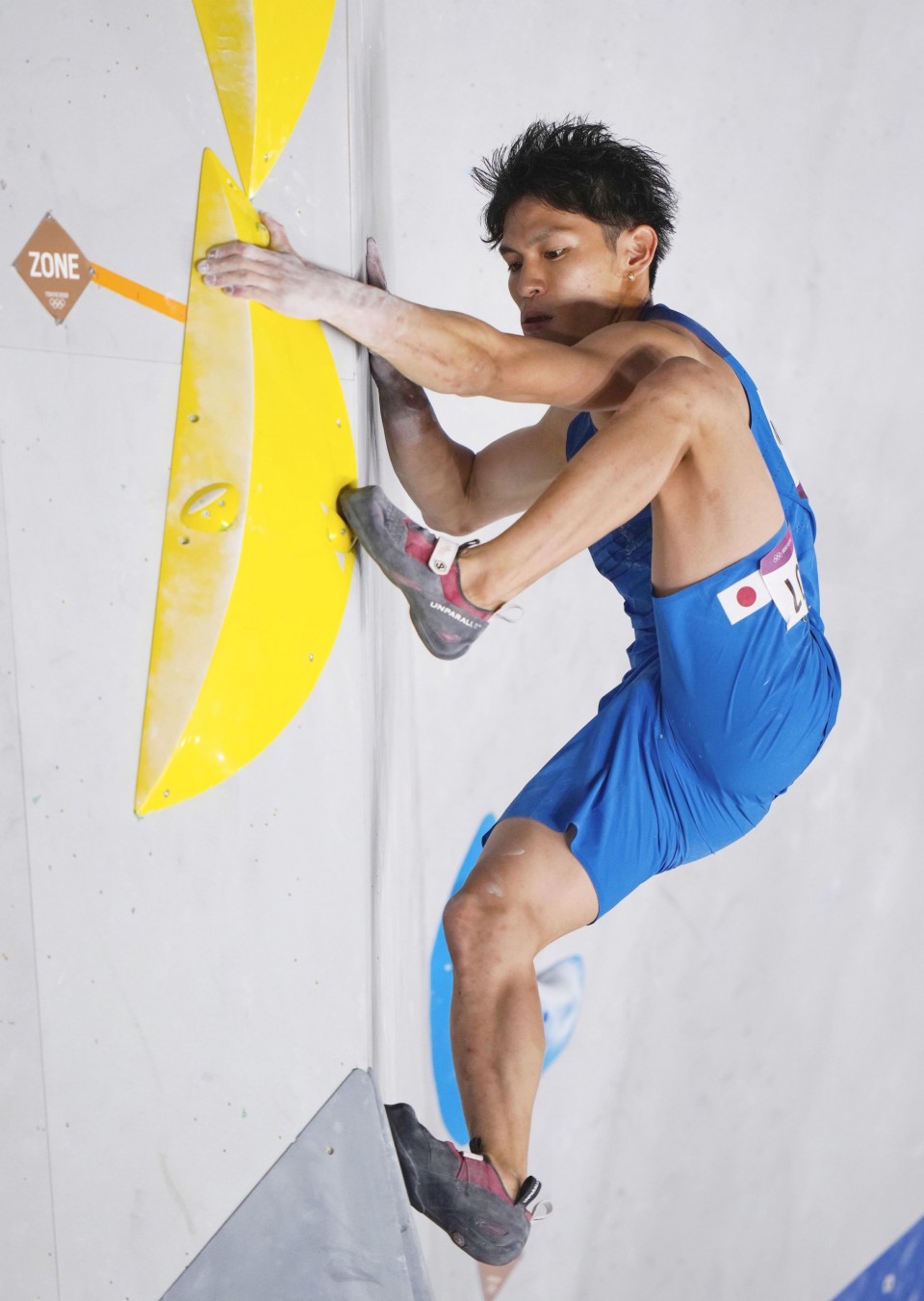 Japan's Tomoa Narasaki competes in the bouldering round of the men's sport climbing combined final at the Tokyo Olympics on Aug. 5, 2021, at Aomi Urban Sports Park in Tokyo. (Kyodo) ==Kyodo

Jakob Schubert of Austria ranked seventh in speed, fifth in bouldering and first in lead for 35.00, just one point more than the home favorite Narasaki.

The final standings in the combined format are determined by multiplying positions from each of the three disciplines. The climber with the fewest points wins gold.

"I'm a bit disappointed as it has become a competition that I will need to reflect on in so many aspects," 25-year-old Narasaki said. "All the climbers were really strong and I had a very good lesson to learn."

Narasaki was seemingly handed a blow before the start of the final when Bassa Mawem, a speed specialist who topped the discipline in Tuesday's qualifier, pulled out due to a left arm injury.

The absence of the Frenchman made it a seven-man competition on the day and Czech Adam Ondra, originally seen as Narasaki's likeliest rival for gold, got a bye in the first round, guaranteeing him a finish no lower than fourth in his weakest discipline.

Narasaki maintained his focus to beat Schubert in the first round, clocking 6.11 to the Austrian's 9.18, before winning the semifinal by 6.02 to 7.05 against Mickael Mawem, the younger brother of Bassa, who stumbled twice early in the climb.

But Narasaki lost his footing early in the final to surrender the discipline's top spot to Gines Lopez, who logged 6.42 to Narasaki's 7.82.

And it turned out to be a crucial error as the final calculations showed it cost him not only a medal but the gold as he could have finished with 18.00 by winning speed.

"Looking at my competitors in the final, my plan was to come top in both speed and bouldering. Not managing that was the biggest setback," Narasaki said.

Narasaki was among five who flashed -- or reached the top on the first attempt -- the first bouldering problem that required careful foot placement.

He failed to hang on to the top hold on the second problem involving his favorite release moves, while Ondra surprisingly failed to even reach the zone, a hold set midway through that would have earned a point.

The third and final problem saw climbers sidle up an overhanging wall anticlockwise and all seven ended with a zone in their first attempts, leaving Coleman in first place after two tops with Narasaki third.

Mawem, Narasaki and Coleman all had 6.00 heading into the lead discipline with Gines Lopes on 7.00. Narasaki was the first to climb the high wall due to his lowest rank among the seven in the discipline in the qualifying round.

The native of Tochigi Prefecture had a good rhythm to his climb, but his left hand failed to hang on to a small hold and fell at "33+," the plus awarded for his failed attempt.

"The Olympics only come around every four, five years and I've found some difficulty with that," Narasaki said. "The atmosphere was totally different and I couldn't put in my usual performance."