A man and a woman sustained burns on Tuesday night after a suspect threw what is believed to be sulfuric acid in a Tokyo subway station and fled the scene, police said, with the incident occurring amid tightened security as the Tokyo Paralympics opened the same day.

The 22-year-old man sustained injuries to his face and shoulder while the 34-year-old woman suffered burns on her legs in the attack that took place shortly after 9 p.m. at Tokyo Metro Co.'s Shirokane Takanawa Station in the capital's Minato Ward. 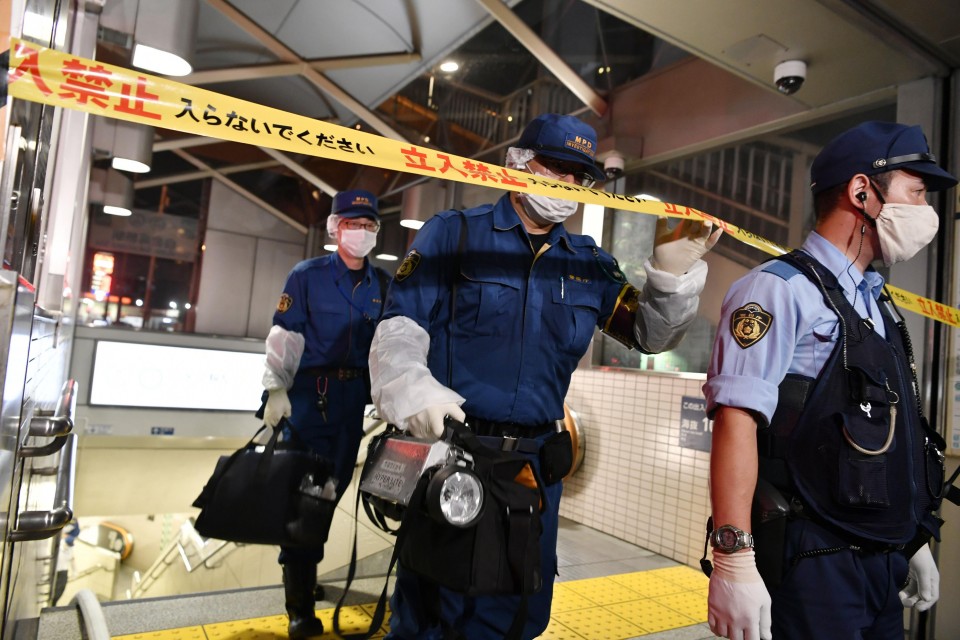 Police officers investigate at Tokyo Metro Co.'s Shirokane Takanawa Station in central Tokyo after a man was attacked with what appeared to be sulfuric acid on Aug. 24, 2021. (Kyodo)

Both victims were transported to a hospital and remain conscious, the police said, adding that the man's burns are severe while the woman's injury is mild.

After the attack, the man told bystanders he could not see and the woman said the affected area felt hot, the police added.

The male suspect, about 175 centimeters tall and aged between 30 and 50, was dressed in black and wearing a mask.

According to the subway operator and law enforcement authorities, the suspect threw the acid at the man as he overtook him from the right side. The woman sustained burns after slipping on the liquid on the floor and falling into it.

The two victims were standing near an elevator in the subway station.

The incident, which occurred in a high-end residential area, prompted police to seal off the station entrance with many officers on alert.

Subway operations were not affected, as the suspect fled the station.

The incident follows a random attack by a knife-wielding man on an Odakyu Electric Railway commuter train in Tokyo earlier this month, which left 10 people injured amid heightened security for the Tokyo Olympics.

More than 10 police and firefighter vehicles were dispatched to deal with the latest incident, with some personnel wearing protective gear apparently to handle chemical agents.