Sweden's Madelene Sagstrom topped the leaderboard after a bogey-free 5-under 66 as the Olympic women's golf tournament began Wednesday with Japanese players Nasa Hataoka and Mone Inami both shooting opening-round 70s.

Following the high drama of a nail-biting seven-way playoff for men's bronze this past weekend, the women's 72-hole event got under way in extreme heat and humidity at Kasumigaseki Country Club near Tokyo. 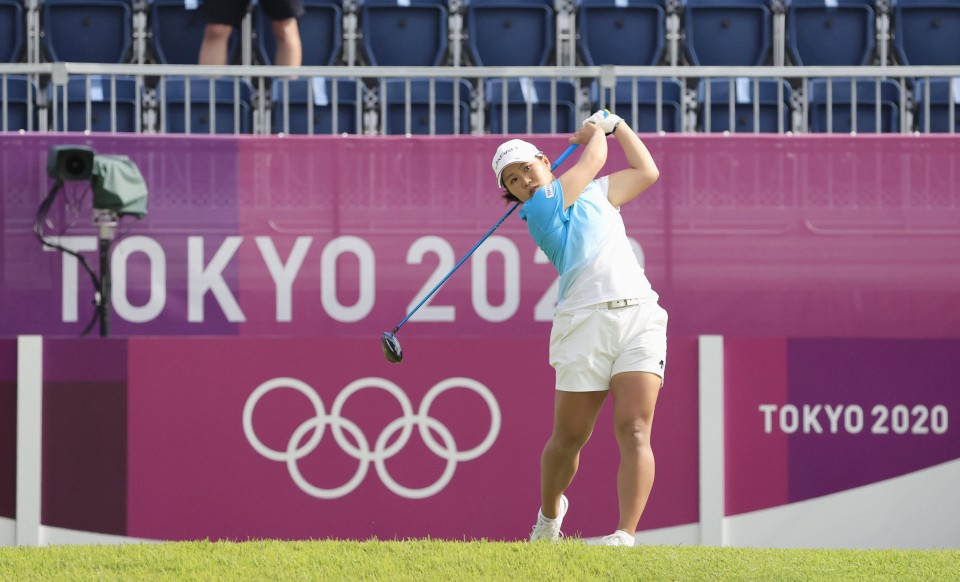 Nasa Hataoka of Japan hits off the first tee during round one of the Tokyo Olympic women's golf tournament on Aug. 4, 2021, at Kasumigaseki Country Club in Kawagoe. (Kyodo)

Sagstrom, ranked 75th in the world, grabbed a one-shot advantage over two players, world No. 1 Nelly Korda of the United States and Aditi Ashok of India, although there is a tightly bunched group close behind.

World No. 9 Hataoka, who mixed five birdies with two bogeys and one double-bogey, Inami and Rio silver medalist Lydia Ko of New Zealand are among a group of seven players tied for 16th.

"On the first two holes I was more nervous than usual," said Hataoka of her Olympic debut.

"It was a tough round with a double bogey but I got three (straight) birdies near the end. I persevered to get those so that was good," she said.

U.S. Women's Open winner Yuka Saso, a dual citizen with a Filipino mother and Japanese father, struggled to a 3-over 74 that left her far closer to the bottom of the leaderboard than the top, at 47th alongside Rio bronze winner Feng Shanshan of China and five others.

Saso, currently 10th in the women's world golf rankings, is one of two players representing the Philippines.

"Golf never goes as planned. It's only the first day so I'll play hard from here on. I wasn't nervous. My game wasn't good, that's all. I want to make all the adjustments I can," Saso said.

Saso was in the same group as American Lexi Thompson, who lost her caddie on the 15th hole when he needed medical care for heatstroke. A day earlier during a practice round, Saso's caddie was rushed to a hospital, also due to heatstroke.

All three Rio Games medalists, who teed off together at 8:41 a.m., are back for another shot at Olympic glory in the field of 60 players which contains all the current top 10 in the world rankings.

Unlike regular pro tournaments, there will be no cut, so all 60 players will play the full four rounds.