FEATURE: Heat measures all the more crucial for Paralympic athletes

While high-temperature days are expected to continue during the Tokyo Paralympics, taking preventive measures against heat illness is all the more crucial for ensuring safety and improving the performance of athletes.

The mercury has regularly topped 30 C since the start of the Olympics more than a month ago, with the relative humidity at around 70 percent, and the harsh climate is forecast to run through the coming week, according to the Japan Meteorological Agency.

During the 17-day Olympics through Aug. 8, a total of 59 athletes suffered heat illness, with six of them rushed to hospitals, according to the organizing committee of the Tokyo Games. 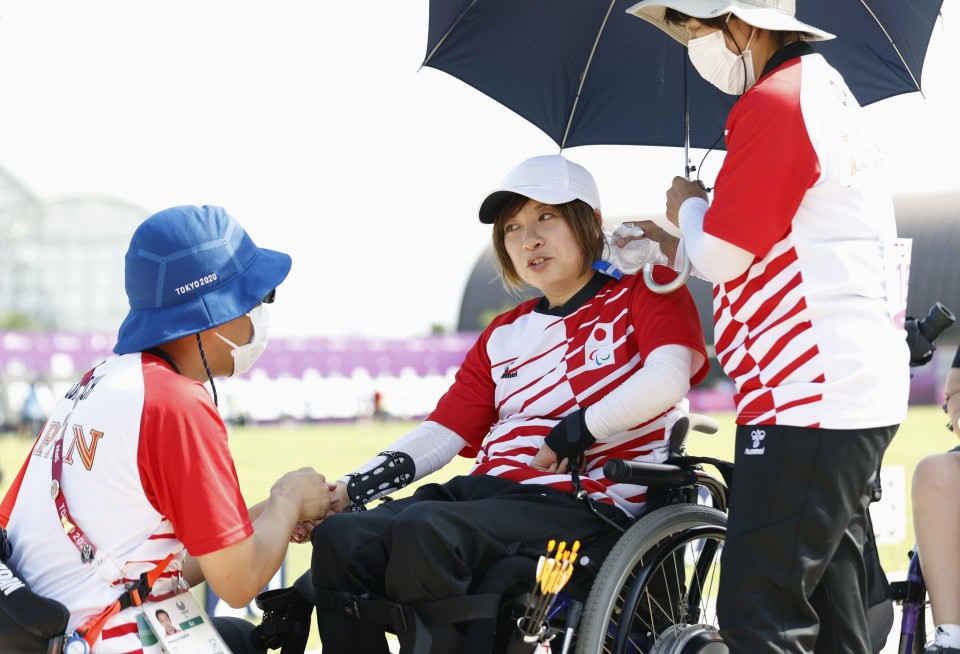 Archery athlete Aiko Okazaki (C) receives a massage under a parasol as she cools herself with an ice bag at the Tokyo Paralympics on Aug. 27, 2021. (Kyodo)

In addition to increased health concerns caused by the coronavirus pandemic, some Paralympians such as those with spinal cord injuries experience less sweating and are at a greater risk of overheating.

Archery athlete Aiko Okazaki, who is paralyzed in her upper and lower body as a result of spinal cord damage, wore an ice vest stuffed with frozen gel under her uniform in her event Friday. "I'm glad that I was able to compete to the end," she said in relief.

If the mercury hits 32 C, the feel-like temperature on the field is likely to be around 40 C and it is a severe environment for athletes, a Japan Para Athletics official said.

Masaaki Sugita, a physiologist at the Nippon Sport Science University, said keeping the core body temperature below 40 C during exercises is essential for athletes to maintain their performance.

"Methods such as cooling the body before and during matches are important for both Olympic and Paralympic athletes," said Sugita, who has developed cooling goods to wear around the palm, neck and head. 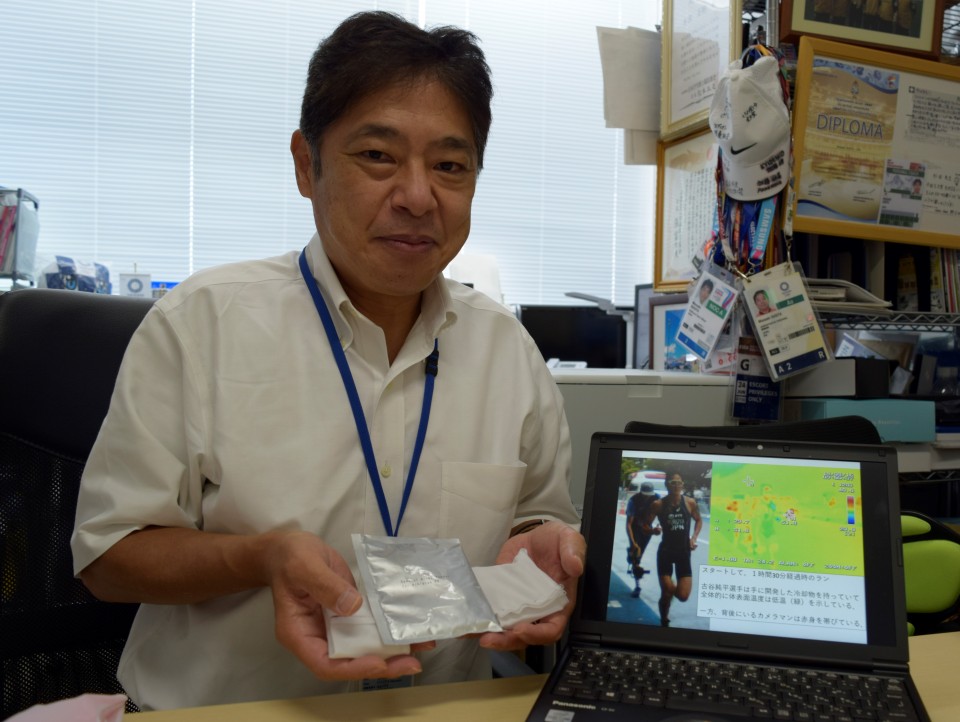 Masaaki Sugita, a physiologist at the Nippon Sport Science University, holds palm coolers and a pouch of sports drink that he developed for the Tokyo Olympics at his office in Tokyo on Aug. 20, 2021. (Kyodo)

For the Paralympics, which will run through Sept. 5, the International Tennis Federation has implemented an extreme weather policy that is stricter than the Olympics since athletes on wheelchairs are more sensitive to radiant heat.

In Wheelchair tennis, matches on all nine outdoor courts at Ariake Tennis Park were delayed for more than six hours on the first day of the tournament on Friday, as the temperature reached 33 C and the heat stress index was above what is considered safe at its starting time at 11 a.m.

Apart from avoiding heatstroke, controlling the body temperature has become key to increasing athlete's performances, and the use of scientific methods to improve physical conditions has opened up another field of competition in the Olympics and Paralympics.

Japan concluded the Olympics with a record haul of 27 gold medals, far above the previous high of 16, set at the 1964 Tokyo Games and equaled in Athens in 2004.

It is said that more sophisticated training techniques, cooling goods and sports drinks developed for the Olympic athletes based on research since Japan won the bid in 2013 to host the games have played an important role in achieving the record medal haul.

Sugita, who was in charge of scientific support at the Japanese Olympic Committee, also created special drinks that can help prevent heat cramps after analyzing sweat from athletes and tracking down what kind and amount of components had been lost.

The drinks contain various minerals, including sodium and potassium, which are lost by sweating, he said. 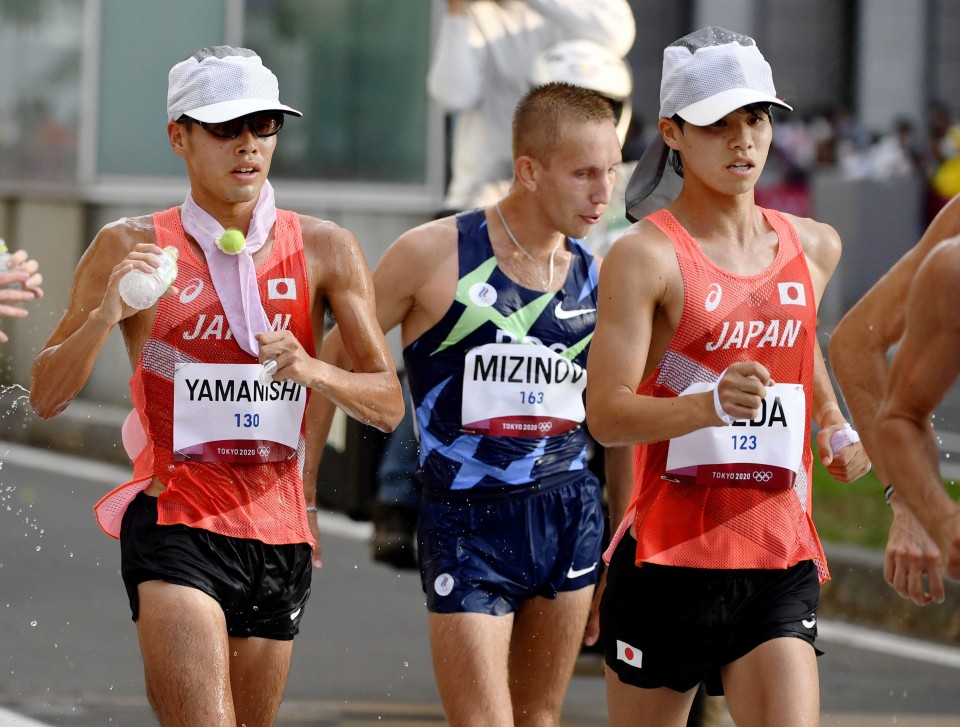 The coolers, available in three different temperatures of 7 C, 0 C and minus 10 C, were also used in marathons, sailing, rowing, canoe and skateboarding, while such drinks were supplied to a total of 15 sports, including tennis and triathlon.

Those products developed by Sugita in a government-commissioned project used during the Olympics are expected to be commercialized, and the drinks may go on sale in the fall.

Since the pandemic forced the Olympics and Paralympics to be postponed for a year, Sugita said Japan's team lost some advantages over heat measures, as its up-to-date methods were disclosed in events such as the World Athletics Championships in Doha in 2019.

"Other countries have really stepped up their efforts in heat measures," Sugita said, who also heads the Scientific Research Committee of the Japan Association of Athletics Federation.

"But the most important thing is the safety of athletes. I'm sure more athletes would have collapsed in that heat without countermeasures," he said, looking back at the marathon and race walk events in Sapporo over the final four days of the Olympics.

Before the postponement, those long-distance events were moved to the northern city of Sapporo from Tokyo due to heat concerns but turned out to be as hot as the Japanese capital with the approach of an unexpected heatwave at the time.

Sugita said it is important to pass on to the public the know-how and new products made in the course of assisting top athletes, as extreme heat has become more common.

"I hope to give back the knowledge to communities such as physical education classes, school clubs, the elderly and amateur sports-loving people," he said.