Tokyo Paralympic flames lit across Japan were united in the host city on Friday, four days ahead of the opening of the biggest event for athletes with disabilities amid continued worries over coronavirus infections.

"We will do everything possible toward the success of the games," Tokyo Gov. Yuriko Koike said at a ceremony in the front garden of Akasaka Palace, a neo-baroque state guest house, held hours after the torch relay began quietly behind closed doors in the capital. 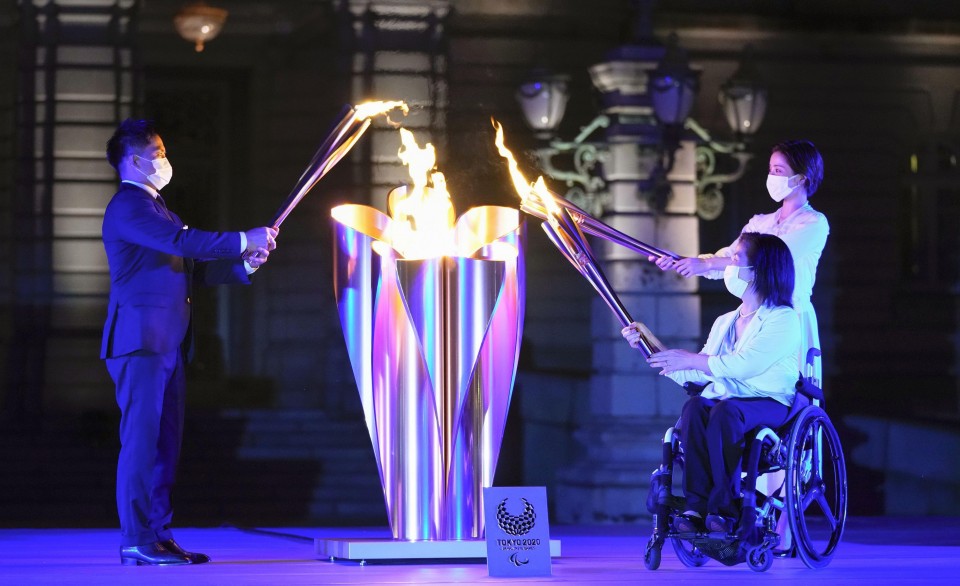 (From L) Three-time Olympic judo gold medalist Tadahiro Nomura, torch relay official ambassador Aki Taguchi and actress Satomi Ishihara attend a ceremony at the State Guest House in Tokyo on Aug. 20, 2021, as the flames ignited in Japan's 47 prefectures and in Britain's Stoke Mandeville are merged into one for the Tokyo Paralympics. (Kyodo) ==Kyodo

Attended by International Paralympic Committee chief Andrew Parsons and other representatives of the organizers, the flames kindled in Japan's 47 prefectures and in Britain's Stoke Mandeville were merged into one in a cauldron at the ceremony that was also closed to the public and shown online.

"By bringing together 4,400 of the world's greatest para athletes in a celebration of human diversity, we are showing that that is light at the end of the dark tunnel we have all experienced over the last 20 months," Parsons said of the Paralympics, delayed for one year due to the coronavirus pandemic, which will begin Tuesday.

"The games are proving that humanity can continue to progress despite the challenges," he said.

During the roughly 40-minute ceremony, digitalized light beams were displayed on a screen to represent the unification of the flames into one. Three torchbearers, former Paralympic shooter Aki Taguchi, former Olympic judoka Tadahiro Nomura and actress Satomi Ishihara, took the stage and lit the cauldron.

The relay's segment in Tokyo running through the opening day of the Paralympics will take place off public roads as daily COVID-19 cases remain at record-high levels.

Instead, a total of about 700 people with or without disabilities will be split into groups of three, and each participant will carry the torch for about 30 to 50 meters at a nearly empty venue.

The number of infections has nearly tripled in Tokyo since the start of the Olympics on July 23, and 5,405 cases were reported on Friday. Japan has been struggling to secure hospital beds in the wake of the resurgence, with a record 25,876 new cases confirmed across the country.

"We will fully enforce infection prevention measures and prepare the best stage for athletes," Prime Minister Yoshihide Suga said at the ceremony.

But concern remains as Paralympic athletes may have a higher risk of suffering severe symptoms due to underlying health conditions.

Hidemasa Nakamura, who leads the Tokyo Games main operation center, told a press conference that the local organizing committee will consider strengthening its COVID-19 countermeasures, such as conducting more tests on officials living in Japan who enter the athletes' village.

"The infection situation has deteriorated significantly compared with how it was when the Olympics were held. Considering that the medical system is under pressure, we may need more measures," he said after holding discussions with a panel of infectious disease experts.

Numerous events related to the Paralympics have been organized in an effort to build excitement for the 13-day games. 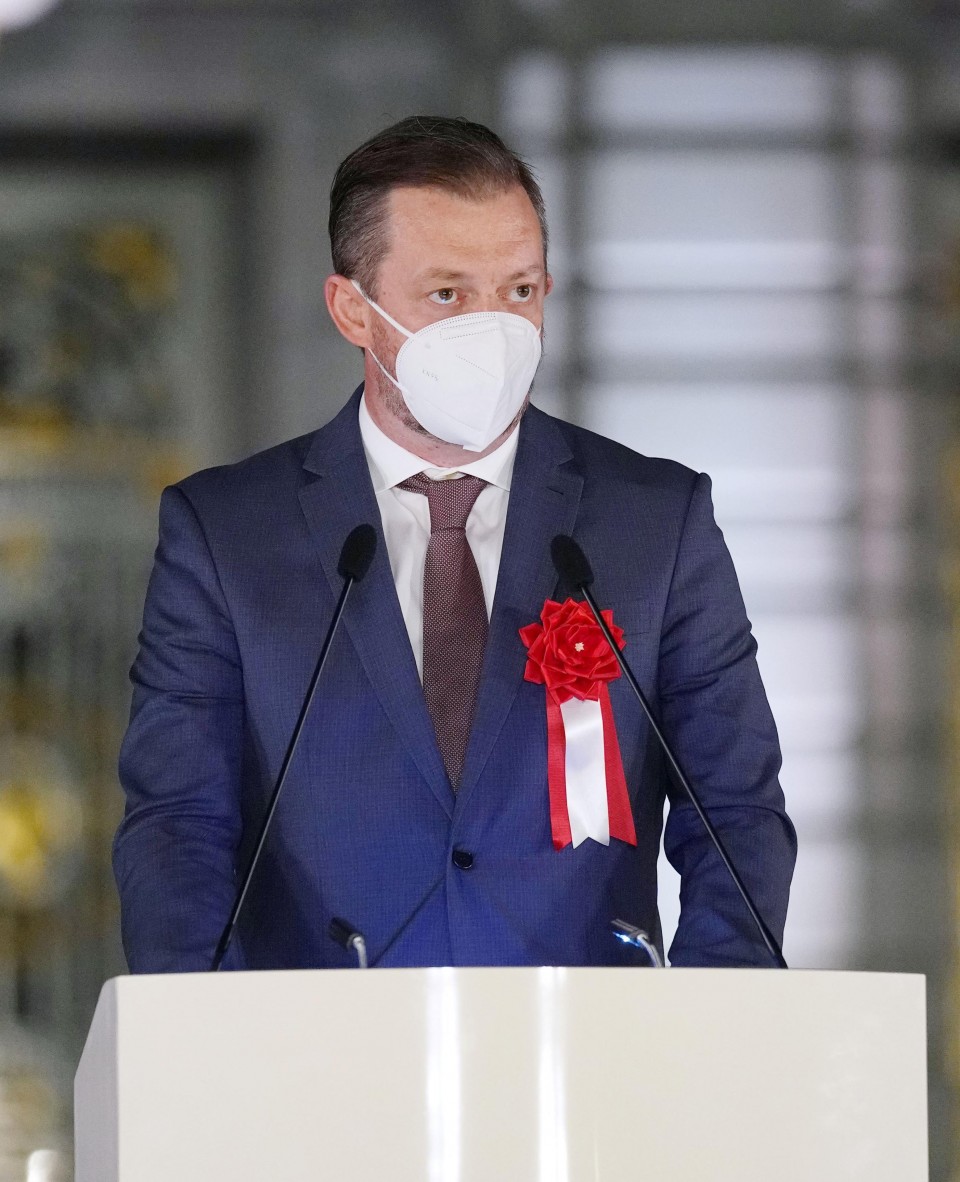 International Paralympic Committee chief Andrew Parsons speaks during a ceremony to merge the flames ignited in Japan's 47 prefectures and in Britain's Stoke Mandeville into one for the Tokyo Paralympics on Aug. 20, 2021, at the State Guest House in Tokyo. (Kyodo) ==Kyodo

Over 60 municipalities in Tokyo also lit the flames in creative ways. Koto Ward, which has seven Paralympic venues, collected its flame by burning about 1,000 wooden plates with messages written about the Paralympics by residents.

In Stoke Mandeville, a small village in southern England considered the spiritual birthplace of the Paralympic movement, a Paralympic gold medalist lit a flame in a ceremony on Thursday featuring cheerleading and musical performances.

The torch relay was set to take place on public roads in Tokyo and three prefectures, Chiba, Saitama and Shizuoka, where Paralympic competition venues are located, but most of its segments have taken place without spectators.

The Paralympics, involving up to about 4,400 athletes from around the world, will be staged without spectators due to the pandemic. But an exception will be made for some students taking part in a government-backed education program in Tokyo and the three prefectures.

The Tokyo Olympics, which wrapped up on Aug. 8, were also held mostly behind closed doors. 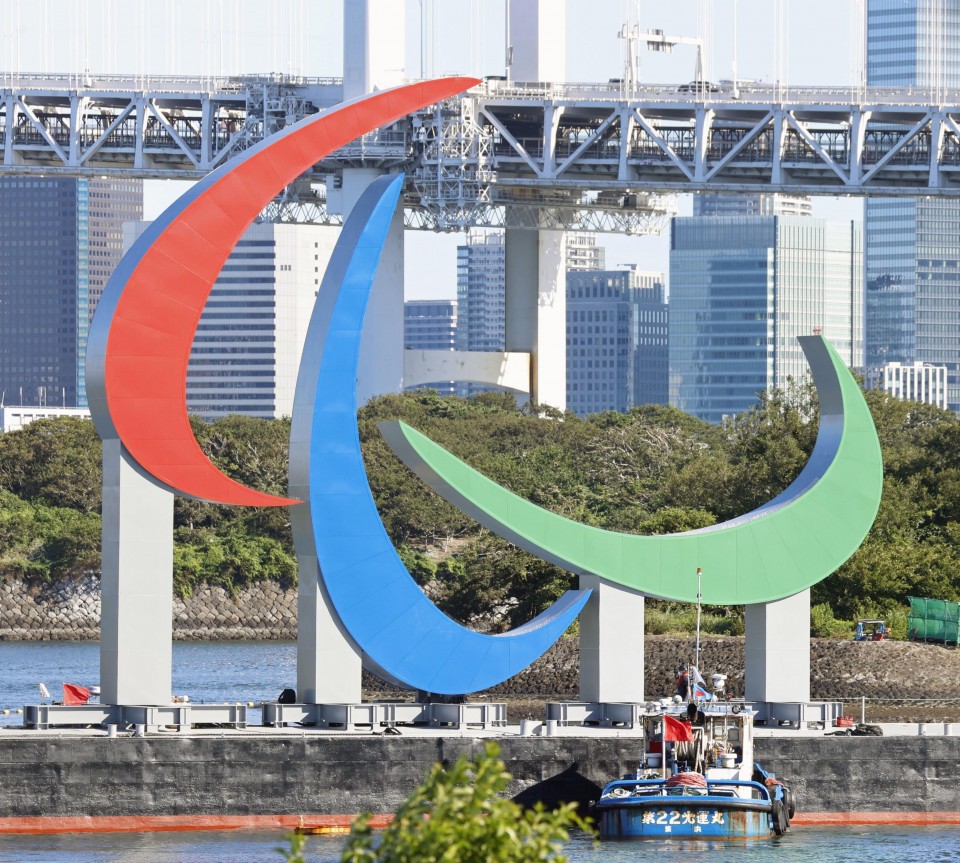 95% of Paralympic programs in Japan affected by COVID-19 spike