President Joe Biden on Monday vowed to complete the planned withdrawal of U.S. military troops in Afghanistan amid criticism over the chaos sparked by the Taliban's takeover of the war-torn country following two decades of American engagement there.

"I stand squarely behind my decision" to withdraw U.S. forces, Biden said as he addressed the nation for the first time since the collapse of the Afghan government over the weekend, while admitting that the Taliban's seizure of power was swifter than expected. 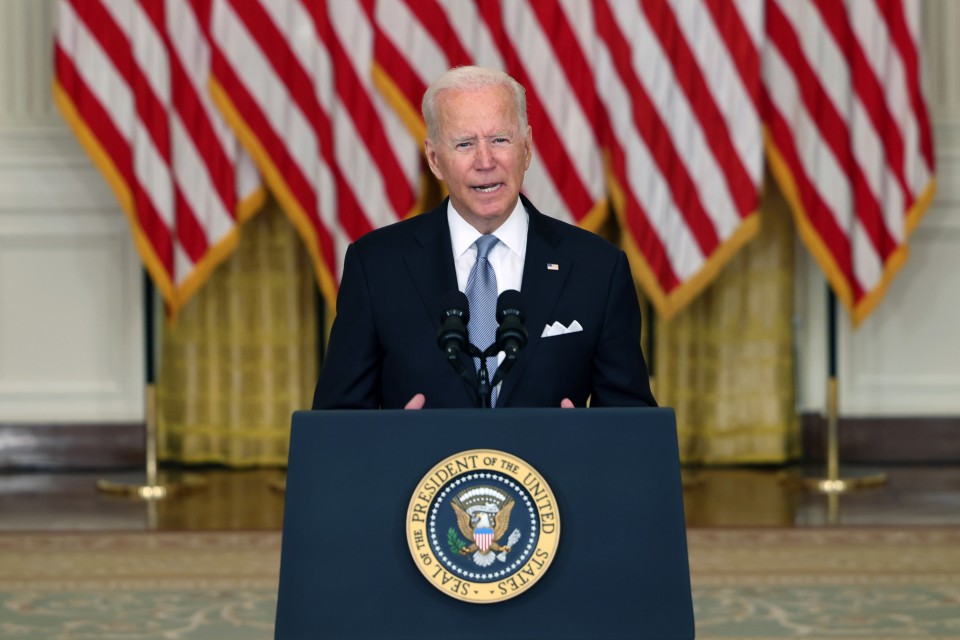 U.S. President Joe Biden delivers remarks on the worsening crisis in Afghanistan from the East Room of the White House on Aug. 16, 2021 in Washington (Getty/Kyodo)

The crisis appeared to deepen as thousands of Afghans reportedly rushed to the international airport in Kabul, with video footage showing some falling from deadly heights after trying to cling to the outside of a departing U.S. military plane in a desperate attempt to escape from the Islamist militant group.

The Taliban's rapid resurgence came just weeks before the Biden administration's target date for completing its troop drawdown to bring an end to what is known as "the longest war in U.S. history" following the attacks of Sept. 11, 2001 by the Islamic extremist group al-Qaida.

Biden emphasized that the United States has succeeded in its goal of degrading the terrorist threat of al-Qaida in Afghanistan including by killing Osama bin Laden, the mastermind behind the terror attacks, and noted that "nation-building" was not part of the mission.

"I am deeply saddened by the facts we now face. But I do not regret my decision to end America's war-fighting in Afghanistan," he said.

"Our true strategic competitors, China and Russia, would love nothing more than the United States to continue to funnel billions of dollars in resources and attention into stabilizing Afghanistan indefinitely," he added.

Biden remained largely defensive throughout his speech and did not take questions from reporters as his administration's handling of the situation has triggered criticism over possible miscalculation of the timing of the troop withdrawal and underestimation of the Taliban's strength.

In early July, Biden had downplayed the chances of Afghanistan falling into the hands of the Taliban, saying it was "not inevitable" because Afghan troops were well-equipped.

Biden said Monday his administration had planned for "every contingency," but "the truth is this did unfold more quickly than we had anticipated."

"So what's happened? Afghanistan political leaders gave up and fled the country. The Afghan military collapsed," he said. "American troops cannot and should not be fighting in a war and dying in a war that Afghan forces are not willing to fight for themselves."

But the president offered his assurance that 6,000 U.S. military personnel are being deployed in Afghanistan to assist with operations to safeguard evacuations of U.S. and allied forces as well as Afghans who have worked alongside Americans.

Biden also warned the Taliban that any attack on U.S. personnel or disruption of U.S. operations will be met with a "swift and forceful" response using potentially "devastating" force.