Seafood entering Japanese markets potentially includes catches by Chinese fishing vessels that routinely engage in illegal fishing practices and human rights abuses against their workers, according to a recent investigation by a British environmental group and interviews by Kyodo News.

Between 2017 and 2020, the Environmental Justice Foundation interviewed and obtained photos from around 70 Indonesian fishermen who previously worked on board 19 Chinese tuna fishing vessels operating in the western Pacific, Indian and Atlantic oceans. 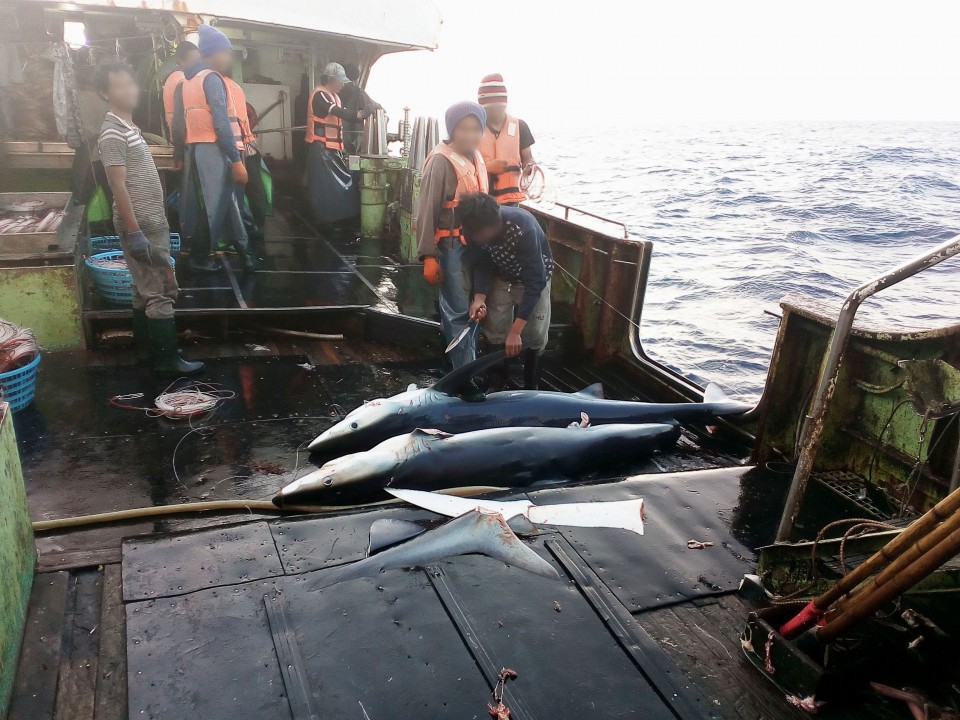 Undated supplied photo shows a crew member of a Chinese fishing vessel finning a shark, the act of slicing off only the animal's fin and discarding the rest of the body. (Copyright Environmental Justice Foundation)(Faces have been pixelated)(Kyodo)

These vessels appeared to trans-ship with Japan-bound refrigerated cargo vessels, known as reefers, some of which were found to be operated by a subsidiary of major Japanese trading house Mitsubishi Corp.

Based on analysis of satellite vessel tracking and testimonies from Indonesian crew members, the EJF concluded that tuna and swordfish had been transferred from Chinese fishing vessels to around 10 Japanese reefers bound for Shimizu port in Shizuoka Prefecture among others. Some crew members testified that they had transferred tuna to a reefer flying the Japanese flag.

A spokesperson for Mitsubishi told Kyodo News that it was not aware of any of its reefers conducting illegal fishing or abusing human rights, saying it regularly checks for such violations and would investigate further if any problems are found.

"Our transactions involving tuna are performed in accordance with international rules," the spokesperson said.

Several of the Chinese fishing vessels belonged to a distant water fishing company based in Dalian, northeastern China, embargoed by the U.S. government in May for slave labor.

Mitsubishi said that while it had purchased tuna from the company in the past, it has not done so since April 2020, adding that, "If the reports are true, it is very regrettable."

Illegal, unreported and unregulated fishing, known as IUU fishing, is detrimental to both the marine environment and legitimate fishing companies, but is extremely difficult to eliminate due to the lack of monitoring in the field.

While the United States and European nations have taken steps in recent years to implement import controls on catches from vessels associated with IUU fishing and human rights abuses, Japan's regulations have lagged behind.

In December last year, Japan finally enacted a law requiring fishermen to show proof of catch, but it currently only covers a few species of marine life, with tuna not included. Environmental groups in Japan are calling for the law to be expanded to cover all fish species as soon as possible.

Almost all of the crew members interviewed by the EJF reported that finning, the act of slicing off a shark's fin and discarding the rest of the body, was practiced on a large scale on the Chinese vessels. The practice is prohibited in many countries, as well as by intergovernmental fishery organizations like the International Commission for the Conservation of Atlantic Tunas.

The Indonesian fishers also told the EJF that they were often subject to physical and verbal abuse by the Chinese crew on board. Many testified that they were made to work excessive hours and in many cases not paid according to their contracts.

A 25-year-old Indonesian fisherman who worked for two years on board a Chinese tuna fishing vessel gave a similar account, telling Kyodo News that at busy times they were often not given sufficient food or water to drink, or even medicine to treat injuries.

"We are grateful that the Japanese are buying our tuna, but we want them to know that behind the tuna there is rampant illegal activity, and poor fishermen like us are being victimized and suffering," he said, speaking on condition of anonymity.