Afghan athlete Hossain Rasouli competed in a long jump event on Tuesday at the Tokyo Paralympics after recently being evacuated from his home country, now under the control of the Taliban.

He became the first athlete representing Afghanistan to take part in the Tokyo Paralympics, a feat that looked impossible when it appeared the country's team would be unable to travel safely to Japan to be part of the world's largest sporting event for people with disabilities, which started a week ago. 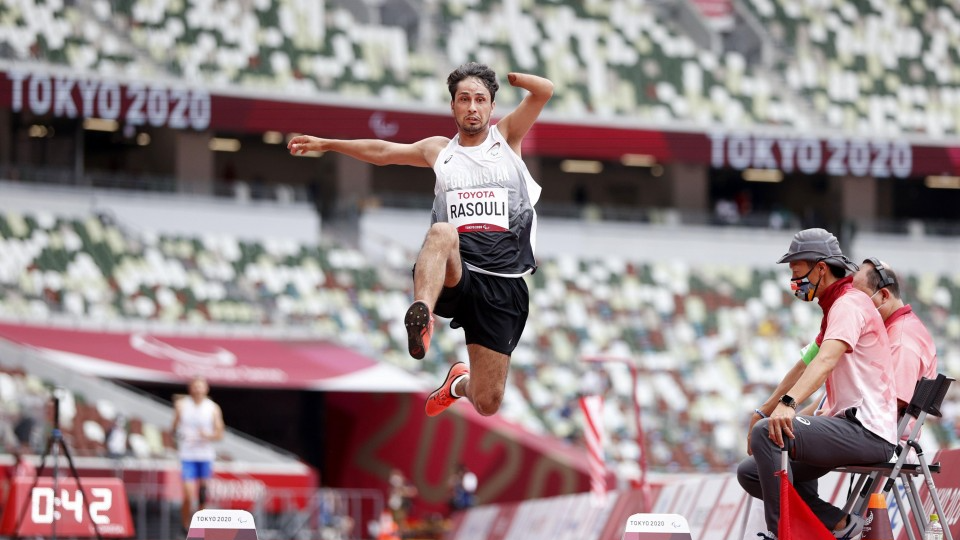 Hossain Rasouli of Afghanistan competes in the men's T47 long jump event at the Tokyo Paralympics at the National Stadium in Tokyo on Aug. 31, 2021. (Kyodo)

Rasouli, 26, who arrived in Tokyo three days ago, competed in the men's T47 long jump and finished last of the 13 jumpers who took part with a best leap of 4.46 meters.

He was originally scheduled to compete in the men's T47 100 meters but arrived too late. It was the first time he competed in long jump at a major meet, according to the International Paralympic Committee.

Rasouli lost his left forearm when a Taliban-laid landmine exploded when he was farming in 2013.

When he was introduced on large screens at the National Stadium before the jump event, he raised his right arm and smiled at the camera, but he did not speak to the press after competing.

Afghan's Paralympic team, represented by Rasouli and Zakia Khudadadi, arrived in Tokyo Saturday evening on a flight from Paris. They had been in the French capital for about a week following their evacuation, which was made possible by a multinational effort.

As part of measures to protect the athletes' mental health and welfare, the IPC has said no media will be allowed to speak with the Afghan pair during the games, which run through Sunday.

IPC spokesman Craig Spence told a press briefing on Tuesday Rasouli is "super excited" to take part in the Paralympics.

The Afghan flag was carried into the stadium at the opening ceremony by a volunteer in a sign of solidarity with the two athletes. Some Paralympians with ties to Afghanistan have expressed concerns and hope over the situation in the Central Asian country.

Brad Snyder of the United States is one of them, having served with the U.S. military in Afghanistan.

"I think it's a tragic and sad situation right now, and I know what all of my colleagues are fighting for was liberty and democracy on behalf of the country of Afghanistan," he said after winning the men's PTVI triathlon gold at Odaiba Marine Park on Saturday.

"Afghanistan has taken a step backward but it's my biggest hope that one day Afghanistan will experience a higher level of liberty and democracy," said Snyder, who lost his eyesight during his second deployment to Afghanistan from 2010 as a member of the U.S. Navy.

The U.S. government has completed the withdrawal of its troops from Afghanistan, bringing an end to its involvement in two decades of war triggered by a U.S.-led military invasion in the wake of the terror attacks of Sept. 11, 2001, involving four commercial aircraft targeting sites on U.S. soil.

The White House said Monday the United States will continue to lead coordination with other countries to ensure safe passage for any Americans, Afghans or foreign nationals who want to depart Afghanistan.

Taliban fighters entered Kabul on Aug. 15 ahead of the planned withdrawal of the U.S. military. 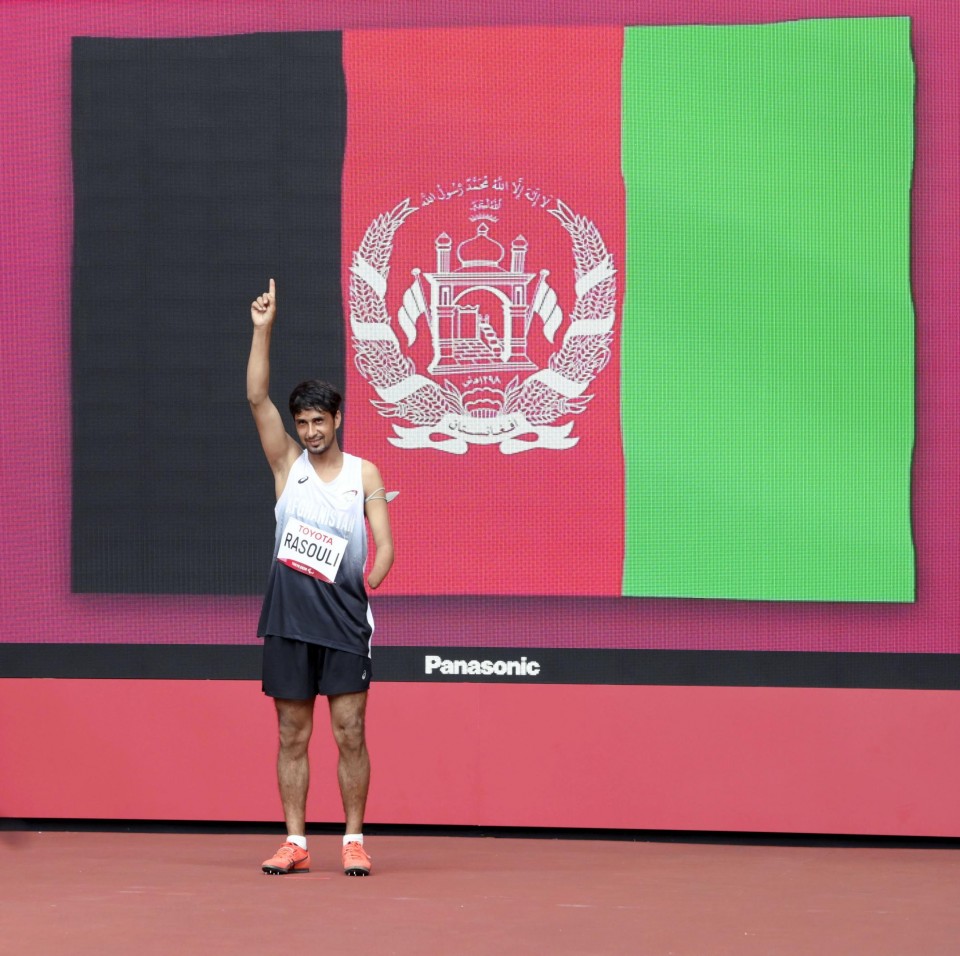 Afghan athlete Hossain Rasouli is introduced at the National Stadium with the Afghanistan flag ahead of the men's T47 long jump event at the Tokyo Paralympics on Aug. 31, 2021. (Kyodo)