Half of Japan's population has now received at least one dose of COVID-19 vaccine, the government said Wednesday, marking a milestone as the country grapples with its largest wave of infections yet, with the nationwide tally of new cases topping 23,000 in another record high.

Just under 64 million of the nation's population of 125 million had been partially or fully vaccinated as of Tuesday, according to data released by the Prime Minister's Office, after the inoculation program was launched in February initially for health care workers and expanded to the elderly in April and later to other members of the public.

According to the Ministry of Health, Labor and Welfare, the number of people who received two vaccine shots and still contracted COVID-19 was less than one-15th of the number of unvaccinated people who contracted the virus among cases reported between Aug. 10 and 12.

Nearly half of the population is expected to have received two shots by the end of August and close to 60 percent by the end of September, bringing Japan nearly on a par with the United States and Britain, Prime Minister Yoshihide Suga told a press conference on Tuesday.

Japan has so far exclusively used COVID-19 vaccines developed by Pfizer Inc. or Moderna Inc. It has begun only this week shipments of the AstraZeneca Plc shot for use in people aged 40 or older to prefectures most in need of additional doses such as Tokyo and Osaka.

The government is considering administering a third dose next year amid concerns of the vaccine's efficacy waning over time and the spread of highly contagious variants of the coronavirus.

Some countries, including Israel, have already begun giving the booster shots, while the World Health Organization has called on wealthy nations to wait for developing countries to secure more doses.

Experts advising the ministry over coronavirus measures said steps need to be taken to deal with the current "disaster-level" situation nationwide.

Japan's progress in vaccinating its population comes as the government scrambles to contain a nationwide surge in COVID-19, on Tuesday deciding to expand its state of emergency to more prefectures and extend it to Sept. 12, after the Tokyo Paralympics end.

The capital reported 5,386 new cases on Wednesday, the second most in a single day, with 275 people in severe condition. Osaka saw 2,296 new cases, marking a record high for the second straight day and the first time the figure has topped 2,000. 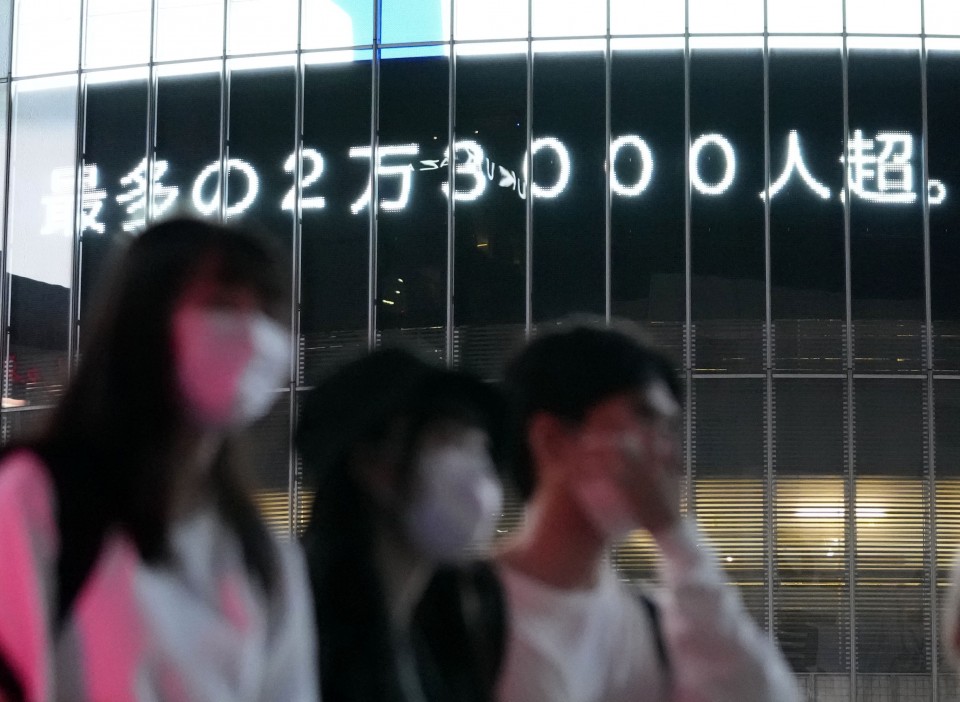 A large screen in Tokyo's Shibuya area displays news that more than 23,000 new coronavirus cases were confirmed in Japan on Aug. 18, 2021, the highest daily count since the outbreak of the virus. (Kyodo) ==Kyodo

Shigeru Omi, the nation's top COVID-19 adviser, said at a parliamentary hearing that he believes actual infection numbers are higher than reported due to insufficient testing, warning that the Delta variant and people becoming less cooperative with government-mandated restrictions has caused the surge in cases.

Also Wednesday, Suga asked Japan's largest business lobby to allow employees to work from home a day after calling on firms to reduce the number of commuters by 70 percent.

Meeting Masakazu Tokura, chairman of the Japan Business Federation known as Keidanren, at its office in Tokyo, Suga said, "Telework is an effective countermeasure. It may be difficult for some industries to implement, but I ask for your cooperation."

Tokura responded that he will notify the lobby's members of the request, telling reporters after the meeting that he also urged Suga to make "antibody cocktail" treatment widely available.

The treatment, in which COVID-19 patients are administered casirivimab and imdevimab intravenously, lowers the risk of hospitalization or death by about 70 percent, according to overseas clinical trials.