Head coach Hajime Moriyasu is determined to see the Japanese men's football team finish the Tokyo Games with a bronze medal, but says they must be more ruthless in front of goal if they are to match their best-ever Olympic result.

Japan's 1-0 semifinal loss to Spain after extra time on Tuesday was the second straight match in which they failed to score over the course of 120 minutes, having beaten quarterfinal opponents New Zealand on penalties following a scoreless draw. 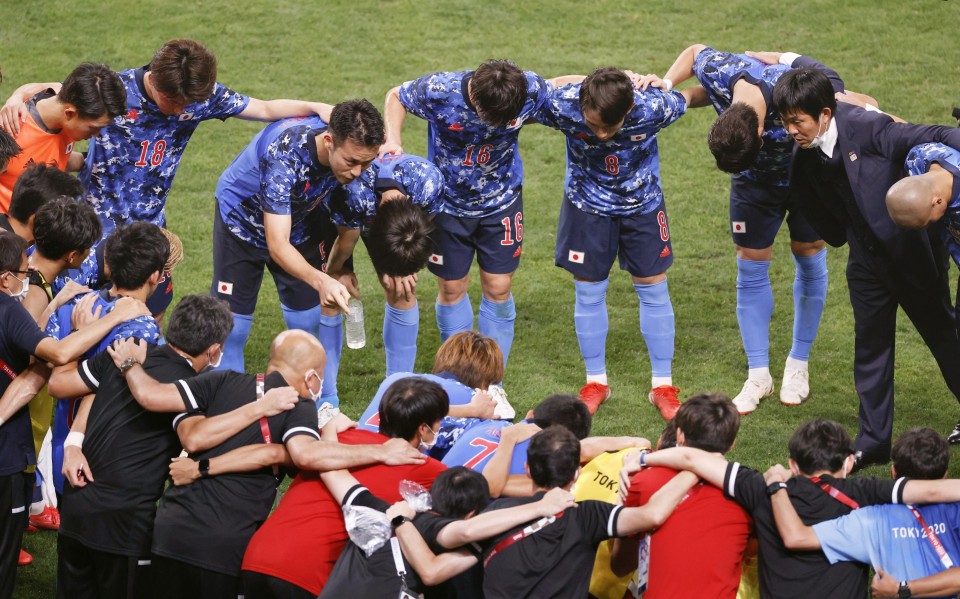 Japanese men's football head coach Hajime Moriyasu (Top R) and the team members form a circle before a semifinal match against Spain at the Tokyo Olympics on Aug. 3, 2021, at Saitama Stadium near Tokyo. (Kyodo)

With Spain dominating possession and dictating the flow of play, Japan looked to hit quickly on the counterattack, but their lack of a final pass or finishing touch let the visitors off the hook in crucial moments.

Moriyasu said his under-24 squad must quickly make adjustments ahead of their third-place playoff Friday against Mexico, when they will seek Japan's second Olympic medal in men's football, following bronze at the 1968 Mexico City Games.

"We were able to transition very well from defense to offense (against Spain), but I believe that overall we have to better ourselves in terms of scoring goals," Moriyasu said following the semifinal loss at Saitama Stadium.

"This ability has to be enhanced overall. I'm not just talking about the match today, but I think throughout all of the matches we had at these Olympic Games. We have to aim for a higher quality."

While Japan beat Mexico 2-1 in the group stage, they are preparing for a tougher contest with a medal on the line at Saitama Stadium. The match will also be a replay of the semifinal won by Mexico at the 2012 London Games.

The experience of the overage players in the squad will be a key, according to Moriyasu, with Hiroki Sakai and captain Maya Yoshida also members of the Japan side who eventually lost a third-place playoff to South Korea in 2012.

"There is a huge difference in terms of whether you just remain as an Olympian, or if you become an Olympic medal winner," Moriyasu said.

"(Sakai and Yoshida) have already talked about their experiences on the (2012) team. So I would like them to share this experience once again, so we will be able to fully prepare ourselves for the Mexico match."