Japan's wheelchair rugby team earned a hard-fought win over France in their opening match at the Tokyo Paralympics, and captain Yukinobu Ike stressed the trust the players have in one another was key in the gutsy victory.

Japan, among the gold medal favorites at the Tokyo Games, trailed France for long periods of the match played at the Yoyogi National Stadium in the capital on Wednesday evening. 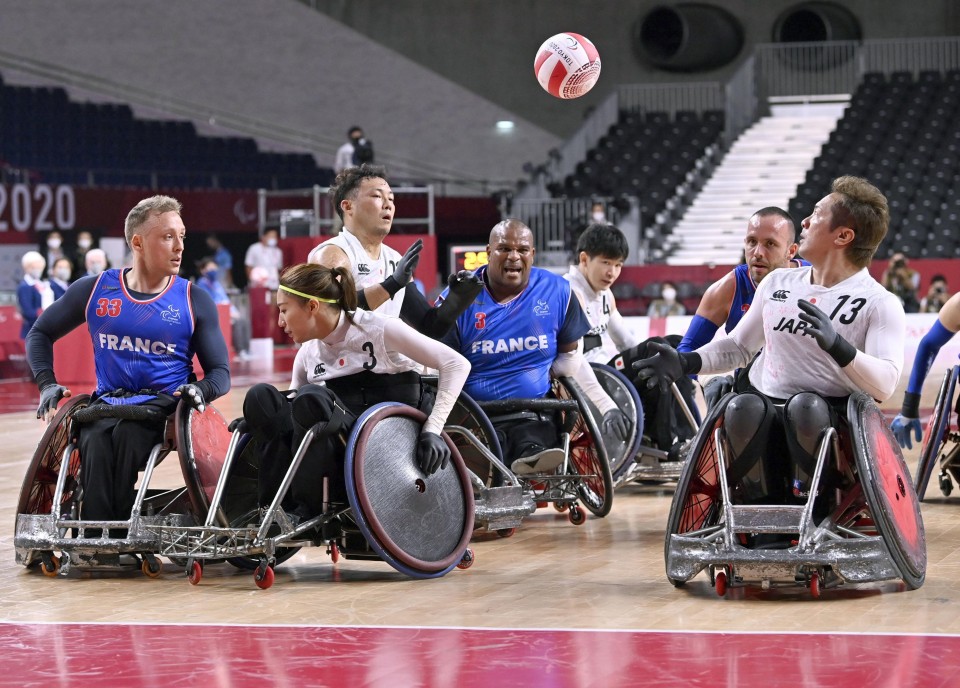 Japan (white) and France compete in the pool phase of the mixed wheelchair rugby tournament at the Tokyo Paralympics on Aug. 25, 2021, at Yoyogi National Stadium. (Kyodo)

"I thought my teammates truly fulfilled their roles, regardless of being on the floor or bench. That brought us the win," said Ike.

"I'm really appreciative Haga caught my last pass and scored after evading a low-pointer (of France)," he said referring to teammate Masayuki Haga's play in Japan's 53-51 win over France, the home team's first competitive game for around 18 months due to coronavirus pandemic.

"The team really fought together and that was the important thing," said head coach Kevin Orr.

While Ike and Orr agreed the win came down to the hard work of every member of the team, Orr leaned heavily on Ike and other core members in crucial moments, including the last minutes. 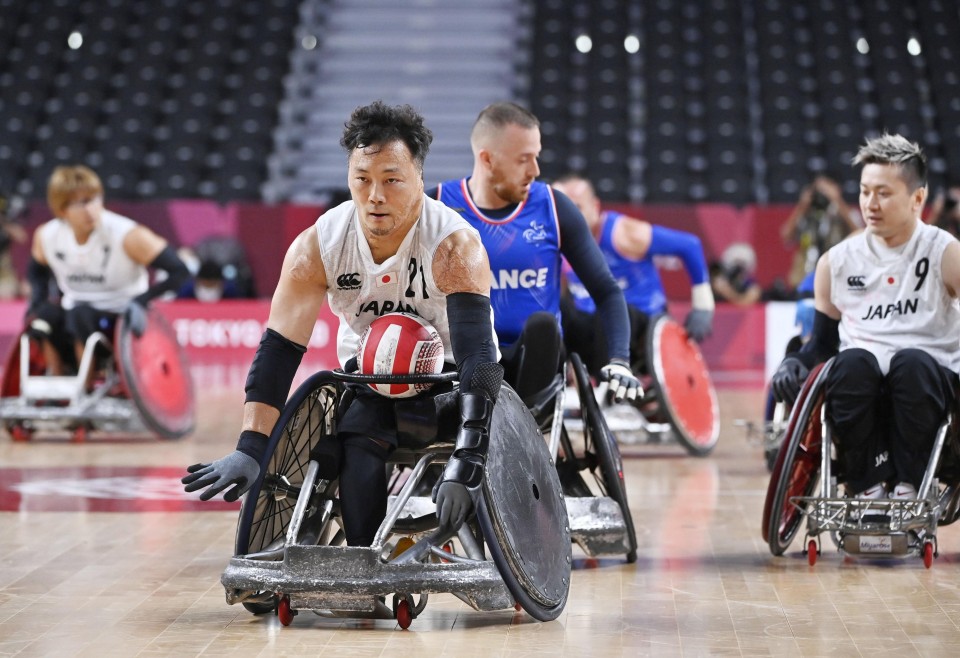 Orr explained, "That lineup had experience in winning (the world championships)."

Japan won the 2018 world title by beating Australia, delivering a measure of revenge after they were beaten by the Australians in the 2016 Paralympic semifinals in Rio de Janeiro. The Japanese went on to take bronze with a win over Canada in Brazil to claim the nation's first medal in the sport.

The worlds gold was Japan's first major achievement under Orr, an American who took the helm of the team in 2017.

Ike, the 3.0 category player known for his speed and wingspan, was the team's heart and soul in Japan's run to its first-ever worlds gold.

International wheelchair rugby has seven different player classifications from 0.5 to 3.5, with the lower the number, the more severe the level of physical impairment.

Ike's combination with his fellow high-pointer Daisuke Ikezaki is regarded as one of the best in the world, and so it proved in Wednesday night's win.

Ike, a native of Kochi, western Japan, had his left leg amputated after he was involved in a traffic accident, in which his left hand was also seriously injured. Three of his friends died.

The 41-year-old took up the sport in 2012 and went to the United States in 2018, playing for the Lakeshore Demolition wheelchair rugby team for about six months.

After the Tokyo Paralympics were delayed for a year due to the pandemic, there were questions about whether the games would be held at all, but Ike was relieved and happy that the team was able to finally get on the court together.

"To all people who have been involved in staging the games, thank you," Ike said.

"I wanted to give my best to people who cannot come to the competition venue but will still root for us."

While Japan is a gold medal favorite, most teams in their pool are very balanced in terms of high pointers and low pointers, according to Ike.

"I believe if I trust my teammates, we can reach our goal," he said.