Japan on Sunday commemorated the 76th anniversary of its surrender in World War II, scaling back a memorial service to mourn the war dead for the second year in a row due to the coronavirus pandemic.

In his first address at the ceremony since taking office last year, Prime Minister Yoshihide Suga vowed to help solve the world's problems "under the flag of proactive contributions to peace."

But Suga's speech, which largely followed that of his predecessor Shinzo Abe, did not refer to Japan's wartime aggression in Asia.

Abe caused a backlash when he modified his speech to remove any mention of aggression and remorse after he took office in December 2012.

Meanwhile, Emperor Naruhito, attending the ceremony for the third time as emperor, expressed "deep remorse" during the annual memorial service, as he did in previous years. 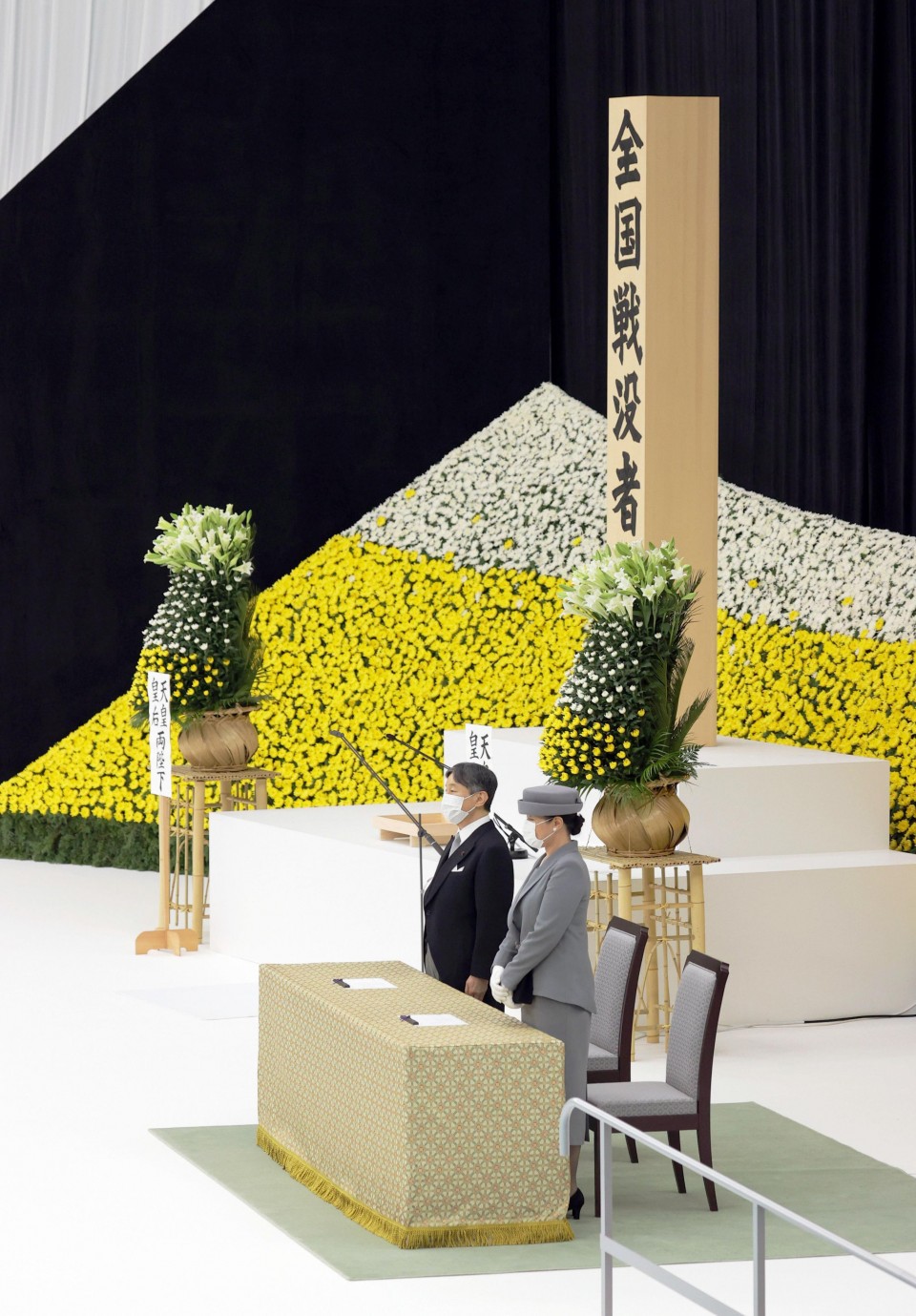 Japanese Emperor Naruhito and Empress Masako attend a memorial ceremony marking the 76th anniversary of Japan's surrender in World War II at Nippon Budokan hall in Tokyo on Aug. 15, 2021. Some 180 people took part in the ceremony -- the lowest attendance since the event started in 1963 -- with the government limiting the number of people present amid the coronavirus pandemic. (Pool photo) (Kyodo) ==Kyodo

"Looking back on the long period of postwar peace, reflecting on our past and bearing in mind the feelings of deep remorse, I earnestly hope that the ravages of war will never again be repeated," he said, while also touching on the "unprecedented ordeal" inflicted by the pandemic.

With over 80 percent of the country's population born after the war, including the 61-year-old emperor, relatives of the dead as well as the other attendees mourned the loss of life as they vowed to keep alive the memory of past horrors.

A moment of silence was observed at noon for the approximately 2.3 million military personnel and 800,000 civilians who perished in the war, including those killed in the U.S. atomic bombings of Hiroshima and Nagasaki.

The ceremony was held in Nippon Budokan, with around 185 people attending, the lowest on record since the government started holding the event in 1963, according to the Ministry of Health, Labor and Welfare.

With Tokyo and several other areas under a state of emergency, relatives of the war dead in 22 of Japan's 47 prefectures did not attend the memorial service due to a resurgence of COVID-19 cases.