Schauffele carded an 18-under four-round total to beat Rory Sabbatini of Slovakia by one shot. Seven players, including Matsuyama, Ireland's Rory McIlroy, American Collin Morikawa and eventual bronze medalist C.T. Pan from Taiwan, finished at 15-under. 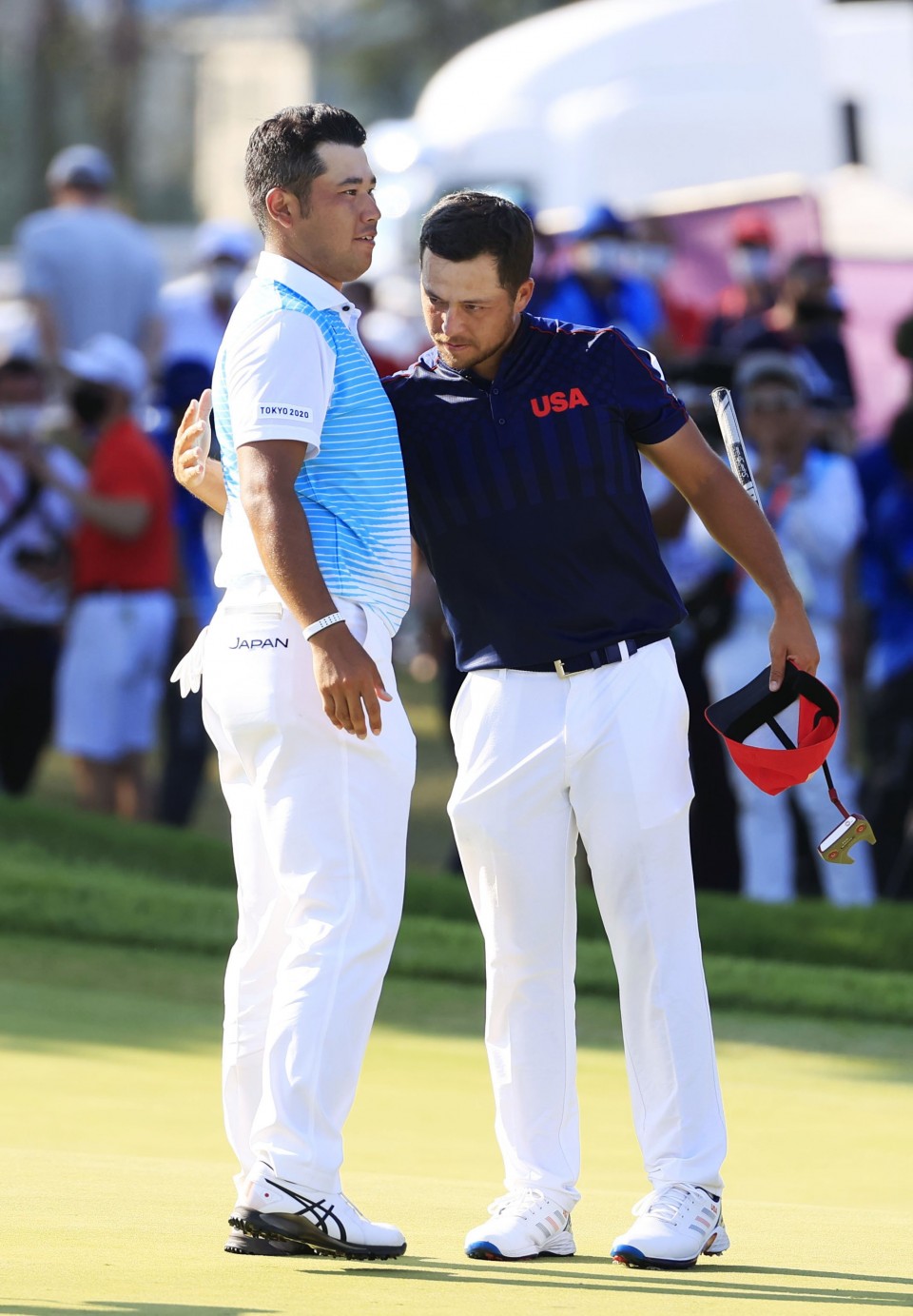 Xander Schauffele (R) of the United States is congratulated by Hideki Matsuyama of Japan after winning gold in the Tokyo Olympic men's golf tournament on Aug. 1, 2021, at Kasumigaseki Country Club in Kawagoe, Saitama Prefecture, near Tokyo. (Kyodo) ==Kyodo

Schauffele shot a 67 on Sunday at Kasumigaseki Country Club with five birdies and a single bogey while Sabbatini made two bogeys but still shot an Olympic record 61 to soar 15 places up the leaderboard.

"I kind of wanted this one more than any other," admitted Schauffele. "First up, you are trying to represent your country to the best of your ability and then you add family stuff on top of that...I'm a little speechless right now, quite honestly."

South African-born Sabbatini, who switched allegiances after marrying a Slovakian, said his 10-under round came as a shock.

Matsuyama, who was seeking to become the first Japanese, male or female, to win an Olympic medal in the sport, and Great Britain's Paul Casey bogeyed the first playoff hole and were knocked out.

Eventually, it became a two-man race between Pan and Morikawa on the fourth playoff hole, the third time each man had played the 18th on the day.

Pan hacked his approach to the edge of the green from the deep rough but Morikawa plugged deep near the front lip of a greenside bunker allowing the Taiwan player to take bronze with a par.

There were no galleries because of the rising COVID-19 infections in Japan.

Matsuyama did not hide his disappointment after his homecoming was spoiled. The reigning Masters champion was making his Olympic debut after he withdrew from the Rio Games in 2016 because of concerns over the Zika virus.

"I wasn't able to perform the way I wanted to but it was good I was among the medal contenders. I thought I might catch up with the leader and even surpass him but that didn't go so well, and it taught me what I need to work on," Matsuyama said.

"Of course I was aiming for gold. I knew I had a chance for bronze if I birdied the 18th hole but I couldn't deliver in crunch time...I don't know how much weight the Olympics carry but I did want to win a medal so it's disappointing."

Rikuya Hoshino, the other Japanese who qualified for the Olympics, had his best round of the week with a 5-under 66 to finish the tournament tied for 38th at 6-under.

Unlike PGA events, there was no cut so all 60 players played the full 72 holes.

Seven of the top 10 men in world golf did not compete at the course in Kawagoe, Saitama Prefecture, north-west of Tokyo. World No. 1 John Rahm and world No. 6 Bryson DeChambeau both tested positive for COVID-19 before their departure for Tokyo.

Matsuyama also tested positive earlier this month and said that at one point he was not sure he could compete in Tokyo.

Second-ranked Dustin Johnson decided to skip the Olympics in order to focus on the PGA Tour.

All three Rio Olympic men's golf medalists, including gold medalist Justin Rose, failed to qualify for the tournament in Tokyo.

The women's Olympic golf competition starts Aug. 4 at the same course as the men's, the venue where Matsuyama won a junior tournament in 2009.