A man who told police he wanted to kill "happy looking women" was arrested Saturday after injuring 10 passengers in a random knife attack on a running commuter train the previous evening in Tokyo, where the Olympics are being held under tightened security.

Yusuke Tsushima, 36, who had fled the scene after the rampage, told police he chose a rapid express Odakyu Electric Railway train because passengers would have no way to escape. He was charged with attempted murder for allegedly stabbing a 20-year-old female university student with a knife. 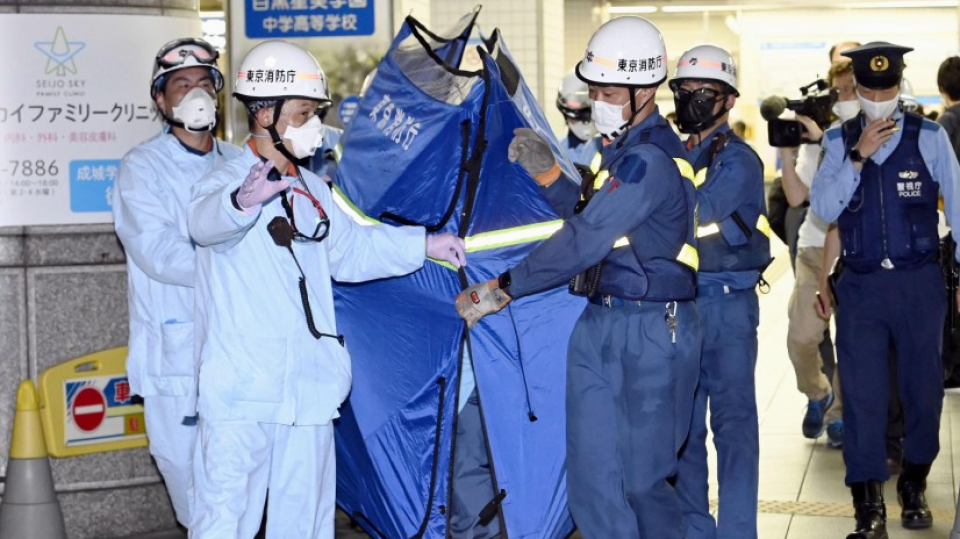 The woman, among the 10 wounded, was seriously injured with multiple stab wounds to her back and chest. None of those hurt was acquainted with the man.

Tsushima has admitted to the assault, telling the police, "I have been wanting to kill happy looking women for the past six years. Anyone would have been okay."

Investigative sources also quoted him as saying, "I came to want to kill happy looking couples and women" after being ridiculed at social gatherings and rejected at dating services.

He also told the police, "I thought I could kill a large number of people as there is no space to flee on a train."

At the time of the attack around 8:30 p.m., some 400 passengers were on the Shinjuku-bound, 10-car train. It was running in Setagaya Ward in the western part of Tokyo and around 15 kilometers from the National Stadium, the main Olympic venue.

Tsushima, a resident of Kawasaki, Kanagawa Prefecture, also said he chose to carry out the attack on the rapid express train as passengers would be on board for a longer period between stops, according to police.

Tsushima, who left his home at around 7:30 p.m. and boarded an Odakyu train from the closest station, switched to the rapid express train, which was to travel eight minutes before stopping at the next station 11 stops away, police said.

He boarded the No. 6 car before stabbing the woman sitting in the No. 7 car and injuring others by attacking them with the knife or punching them.

He also spread cooking oil on the floor of the No. 8 car with an intent to start a fire, but the fire did not break out, police said.

The police initially said one woman and eight men were hurt in the train attack but later said a total of 10 passengers including four other women and five men on the train were injured.

Earlier Friday, Tsushima was suspected of shoplifting at a grocery store in Tokyo's Shinjuku Ward and a female staff member at the store had informed police.

The police have confiscated from the train a lighter, a container that is believed to have been used to carry the oil, a 20-centimeter-long chef's knife that Tsushima purchased two years ago on the internet, and a mobile phone found outside the train.

After fleeing the site, Tsushima was detained by police later that night at a convenience store, around 4 kilometers north of the scene, in neighboring Suginami Ward, police said.

A worker at the convenience store called the police after the man said, "I am the suspect in the incident reported by news media. I am tired of fleeing," it said.

Tsushima was able to carry out the attack even as Tokyo police strengthened security measures for the Summer Games, shedding light on the difficulties of preventing crimes on trains.

Japan has had other incidents on trains. In 2015, a man set himself on fire on a shinkansen bullet train, killing himself and another female passenger as well as injuring 26 others aboard. In 2018, a man killed a passenger and injured two others in a knife attack on a bullet train.

People living in the same apartment building as Tsushima said he hardly talked and they never saw family members or friends visit.

After the suspect had left the scene, the train crew guided passengers along the tracks to a nearby station.

"There were a lot of people with blood on their clothes running away in panic," said a 19-year-old university student who witnessed the incident.

With the Tokyo Olympics ongoing, the transport ministry has asked all the railway companies to ensure safety by thoroughly checking their surveillance activities with security staff and cameras.