In recent years, the construction of new social welfare facilities around Japan, particularly for recovering drug addicts, has often resulted in fierce opposition from local residents who view them as a threat to their neighborhoods.

The Kyoto chapter of the nonprofit Drug Addiction Rehabilitation Center saw residents' protest movements arise over the building of a group home for recovering addicts in Kyoto's Fushimi Ward after launching the project in 2018. 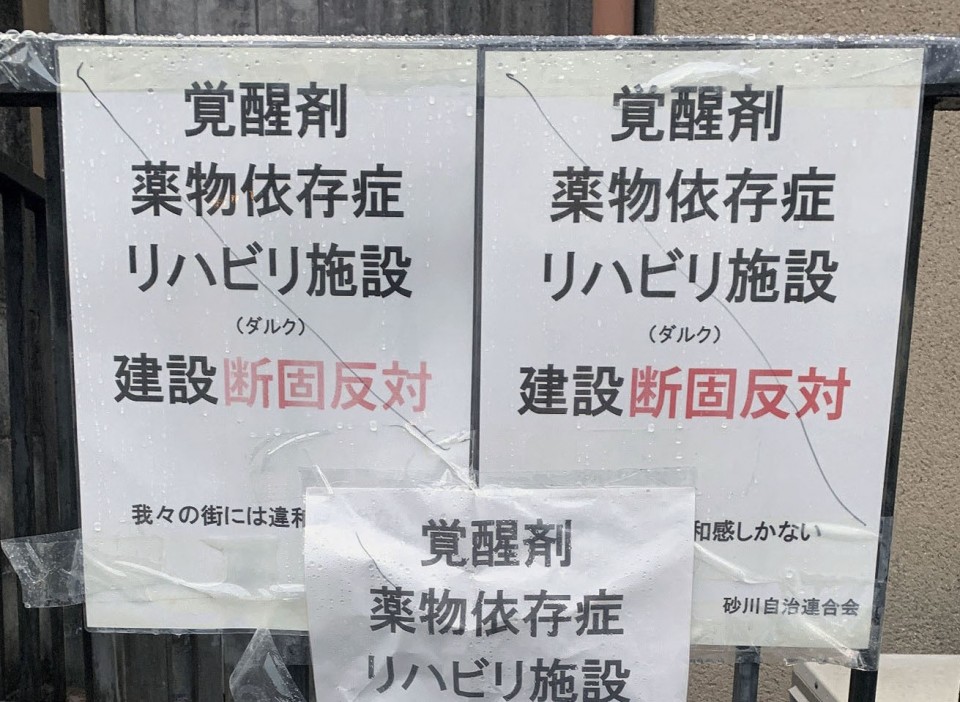 Undated supplied photo shows a poster with a message opposing the building of a group home for recovering addicts in Kyoto city. (Kyodo)

But despite the backlash, one residents' association broke ranks to offer support, while a university student group has joined forces with recovering addicts at the facility on community projects, offering hope it will gain the trust of local residents.

"There's not much here," said Jun (not his real name) as he and other men wearing masks crouched to pick up trash in the vicinity of the group home on an afternoon in late May.

The 33-year-old first moved into a DARC facility about five years ago to get help with a stimulant drug addiction. But he then relapsed and, following an arrest and the subsequent dismissal of his case, entered the Fushimi facility shortly after it began operating last September.

"As someone who lives here, I am just doing what I can for the community," he said. 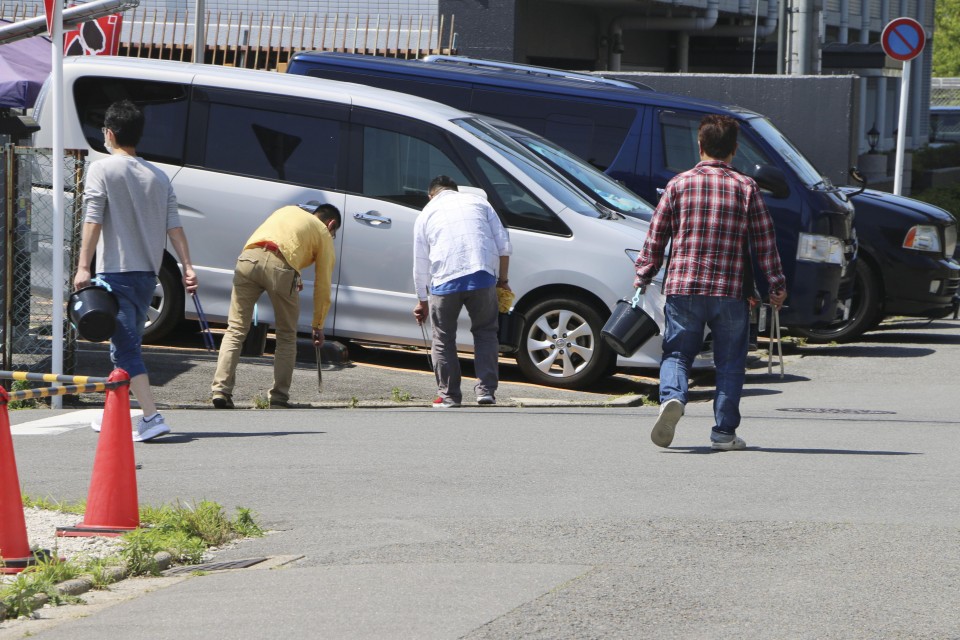 Photo taken on May 31, 2021, shows residents of a group home for recovering drug addicts picking up trash near the facility in Kyoto city. (Kyodo)

Tsuneo Kondo, a former drug abuser, started DARC in 1985 as a private rehabilitation facility to support recovering alcoholics and drug addicts. Many of the staff are recovering addicts themselves, and there are currently about 60 chapters in 42 prefectures nationwide.

According to a follow-up survey conducted by the National Center of Neurology and Psychiatry in 2018, the drug withdrawal rate for DARC users was as high as 88 percent six months following the survey, and 63 percent two years after the poll was taken.

Opened in 2003, the Kyoto branch of DARC had initially leased a private house -- the same facility where Jun stayed on his first stint -- for the communal living of users, in addition to a day center where staff are stationed to hold self-help group meetings. Group therapy among the users is the focus of the program.

The trouble with local residents began in 2018 when the organization set out to build its new group home within Fushimi Ward. A joint neighborhood task force was created by a federation of residents' associations to spearhead opposition.

Flyers were posted throughout the town, and many made vehement objections to the construction plan at several meetings hosted by the joint task force.

Local residents demanded to know what DARC thought about the planned facility being located along an elementary school route and complained that "addicts are not sick people," and hence had no need for such a facility.

But one residents' association was not convinced. It stepped in in September 2019, saying in a letter that it "would not cooperate with the opposition movement."

"Kyoto DARC is a facility that supports recovery from drug addiction and rehabilitation. It is recognized by the health ministry, as well as the Kyoto prefectural and municipal governments. Opposing its housing could potentially promote discrimination and prejudice," the letter read.

DARC's Kazuhiro Dehara, 52, who heads the group home and was once arrested and convicted of stimulant addiction himself before making a recovery with DARC, called the letter "extremely heartfelt; even now when I read it I am nearly brought to tears."

Dehara, who lost sleep from the backlash he experienced at the town hall meetings where he tried in vain to explain the necessity for the group home, said he was emboldened by the vote of confidence.

"It is an infringement of human rights to deprive people of the right to housing," said Kazuaki Tsuda, 54, chairman of the supportive residents' association, who explained that he distributed the letter "since we don't have the right to agree or disagree (with the construction) plan in the first place." 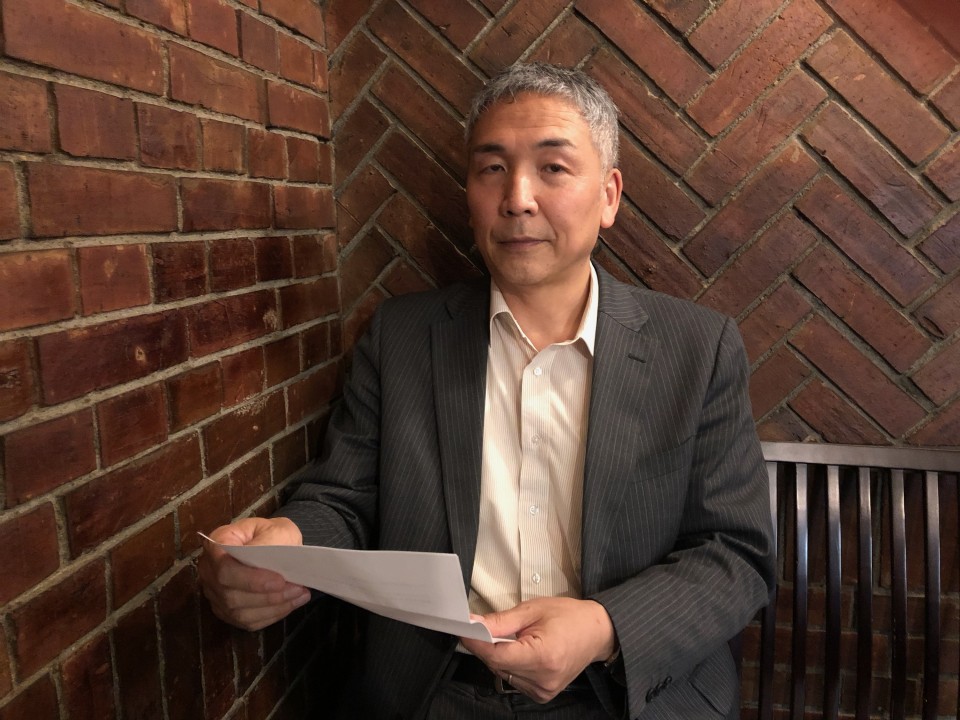 Tsuda admitted he initially had concerns over the building project when DARC joined the residents' association five years ago because of the criminal pasts of many of users, including staff.

But he said, "I came to understand by seeing them cooperate in community festivals and events that they are really working hard to overcome their addictions."

DARC also attaches great importance to community service and volunteering as part of its activities, Tsuda added. "They made delicious pork miso soup for a rice-cake pounding festival. Residents who were opposed also ate their soup. I'd like to see more of this," he said.

Although there have been no problems to mention, the turmoil over the group home has left a deep divide in the community. According to Tsuda, among the 12 residents' associations making up the federation, seven that opposed the construction left. Mutual exchanges that used to be common have ceased to exist, he said.

Although Yasushi Ono, 70, who headed up the neighborhood task force, admitted there has been no wrongdoing since the facility began operations, he is still suspicious. "I am relieved that they have been quiet and nothing has happened. But as a group, you don't know what they're up to. So I continue to be on the alert."

The joint neighborhood task force stopped its activities last October, but Ono said: "I think junkies are never really cured. Even celebrities who get caught once end up getting arrested over and over again."

Students in the neighborhood who witnessed the opposition to the group home also got involved. Naoto Takahashi, a graduate student of Kyoto Bunkyo University in the city of Uji, said he had learned in a class in the spring of 2019 how important the role of DARC's self-help groups was in treating drug addiction.

But he said once off-campus he felt strongly that "commonsense no longer prevailed." He wondered how he could get people in society who have little understanding about drug addiction to take an interest in the issue.

That's when he conceived the idea of creating a student group, called "REACH," that could work together with residents of the group home, making accessories and selling them at street markets and other places in the community. DARC welcomed the unexpected proposal from the students. 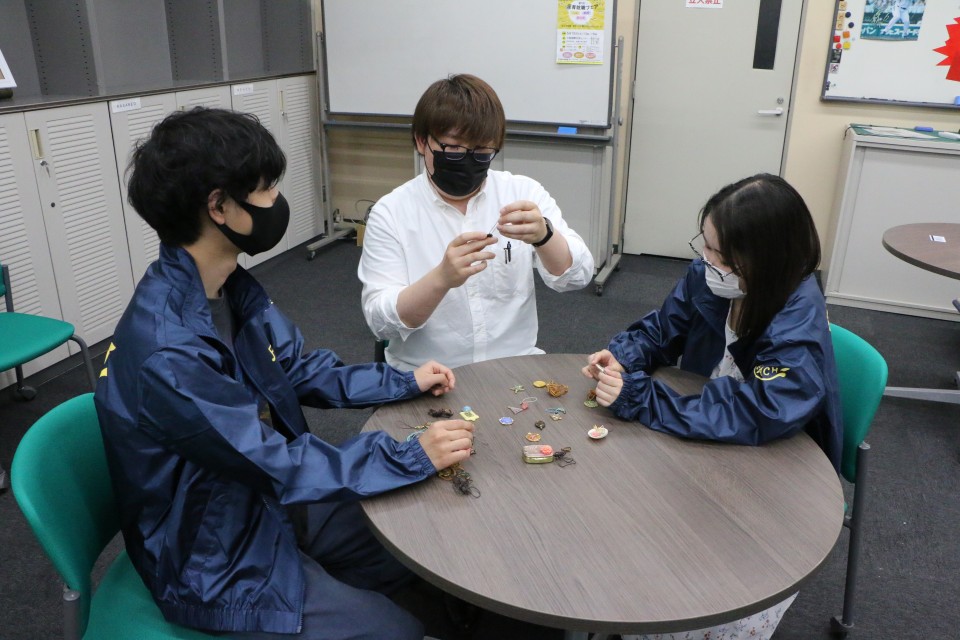 Kyoto Bunkyo University graduate student Naoto Takahashi (C) speaks on June 10, 2021, with others in a student group in the city of Uji in Kyoto Prefecture, including group representative Emi Takematsu (R), supporting a facility for recovering drug addicts. (Kyodo)

"When we've sold the accessories, there've been people who've asked, 'What's DARC?' Our activities have acted as a catalyst for people to become interested," Takahashi said.

Although the study groups have mainly been conducted remotely due to the coronavirus pandemic, Takahashi said that in the future, the students aim to work together with the former addicts on a new slogan against drug abuse -- the current is "dame, zettai," a close equivalent of the "Just Say No" campaign slogan that was championed to dubious effect as part of the "War on Drugs" in the United States during the Reagan administration.

"We want to expand our activities by making use of what we have learned so far," Takahashi said.

Since the completion of the group home, Kyoto DARC says it has only taken the first step toward fostering mutual understanding and overcoming prejudices.

Emi Takematsu, 20, has taken over as the student group representative. "To be honest, when Mr. Takahashi invited me to join two years ago, I was perplexed. Because of the influence of incidents in the news and the slogan 'dame, zettai' I had this image that a person's life would be ruined if they did drugs just once. I think that is a mistake now."

Since working together to make accessories, she says she sees the DARC residents in a different light. "Now I have much more personalized relationships with them. I would like to continue to deepen my involvement," she said.