The prospect of Prime Minister Yoshihide Suga being able to conduct active diplomacy with foreign leaders during the Olympic Games in Tokyo remains uncertain, with Japan struggling to fix foreign leaders' visits under a fresh COVID-19 state of emergency that will run for the duration of the games.

The United States and China have decided not to send their leaders to the Tokyo Olympics, which will open July 23 and end Aug. 8. North Korea pulled out its whole team of athletes from the games earlier in the year. 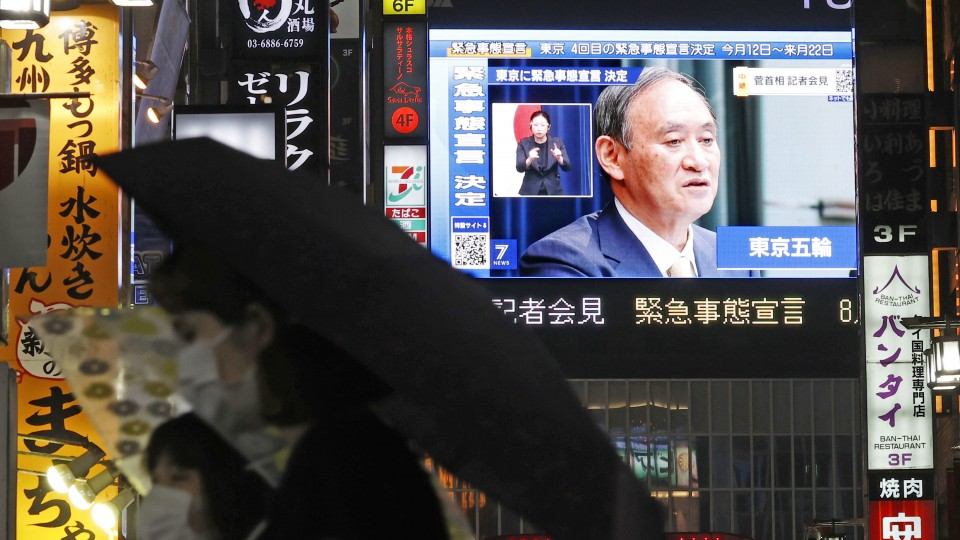 A large screen in Tokyo's Shinjuku area shows Japanese Prime Minister Yoshihide Suga meeting the press on July 8, 2021, over his government's decision to place the capital under a fresh COVID-19 state of emergency amid a recent surge in infections. (Kyodo) ==Kyodo

South Korea is coordinating a visit by President Moon Jae In timed for the opening ceremony. But his bid to restore soured ties with Japan has met with reluctance from Suga due to Moon's handling of wartime issues.

Initially, Japan saw the Olympics and Paralympics as opportunities to spur foreign diplomacy as it expected to receive leaders and senior officials as guests from more than 100 countries and regions before the novel coronavirus spread across the world, according to government officials.

But French President Emmanuel Macron, whose country will host the 2024 games, is the only major world leader so far to have announced his attendance at the opening of the Tokyo Olympics.

U.S. first lady Jill Biden is considering whether it is feasible for her to attend the opening ceremony, given that all spectators will be banned from the venues of the games in the capital and neighboring prefectures due to the pandemic.

In addition, Suga's government put Tokyo under its fourth COVID-19 state of emergency from Monday through Aug. 22 in an effort to curb a resurgence in coronavirus cases and quell concerns that the games may trigger a further surge in infections.

Attention has been drawn to whether Moon will actually travel to Japan as Tokyo-Seoul relations have sunk to the lowest level in decades over issues related to Japan's colonial rule of the Korean Peninsula between 1910 and 1945.

The two neighbors have not held a summit meeting since December 2019, after the South Korean Supreme Court ruled in 2018 that Japanese companies should compensate South Korean wartime laborers.

Relations further deteriorated in January this year when the Seoul Central District Court ordered the Japanese government to pay damages to a group of former comfort women over their treatment at military brothels during World War II, the first such ruling in South Korea.

Japan takes the position that a 1965 bilateral agreement settled all claims related to its colonial rule of the peninsula.

Even if the two leaders meet, there is no guarantee it will lead to a significant improvement in soured ties.

Japan has reiterated that Suga will meet with Moon if he visits Japan for the Olympics, but Tokyo appears to want to hold talks in a ceremonial manner.

"It's natural to treat (him) in a polite manner in light of diplomatic protocols," Suga said at a press conference last week.

Moon is calling for a full-scale summit meeting to discuss a range of issues between the two countries, which also include Japan's decision to release treated radioactive water into the Pacific Ocean from the crippled Fukushima Daiichi nuclear power plant.

China is considering sending Sun Chunlan, a vice premier in charge of sports policy, to the July 23 opening ceremony as strained bilateral ties over history and territory as well as concerns about the pandemic situation in Japan will likely rule out attendance by President Xi Jinping. 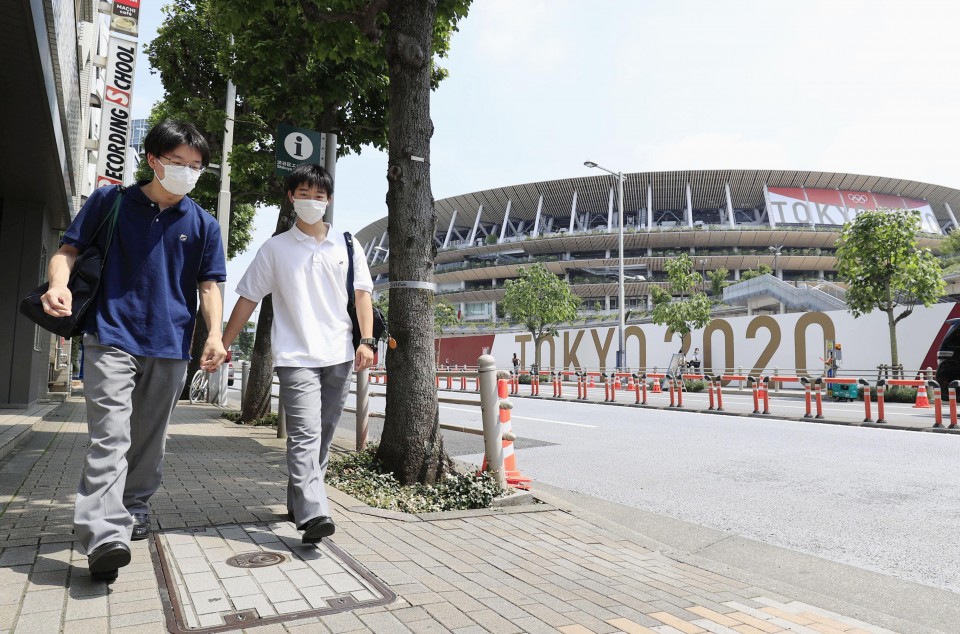 Japanese Foreign Ministry officials say the impact of the fresh state of emergency on the scheduling of foreign leaders' visits is likely to be limited.

But one of the officials said there is less talk about diplomatic events than initially anticipated mainly because of infection situations in and outside Japan.

According to the ministry, leaders from about 80 countries and regions attended the opening ceremony of the 2012 London Olympics and from some 40 at the 2016 Rio de Janeiro Olympics.

Ministry officials said the list of top guests for the opening will not be finalized until just before the event. "We expect a similar degree of attendance by leaders as at the 2016 Olympics," an official said.

Although Olympic organizers have decided to stage the tournament without spectators at most venues in the capital and other cities as a counter-infection measure, seats are expected to be arranged for diplomatic guests at the opening ceremony.