Ordinary Chinese people have become worried that the Communist Party, which marked the 100th anniversary of its founding on Thursday, has ruined the image of the nation across the board, hindering private exchanges with Japanese.

"China is not equal to the Communist Party," said Zhang Yong, a 45-year-old architect. "I hope more Japanese will visit China and know more about what we are now, after travel restrictions in the wake of the coronavirus pandemic ease." 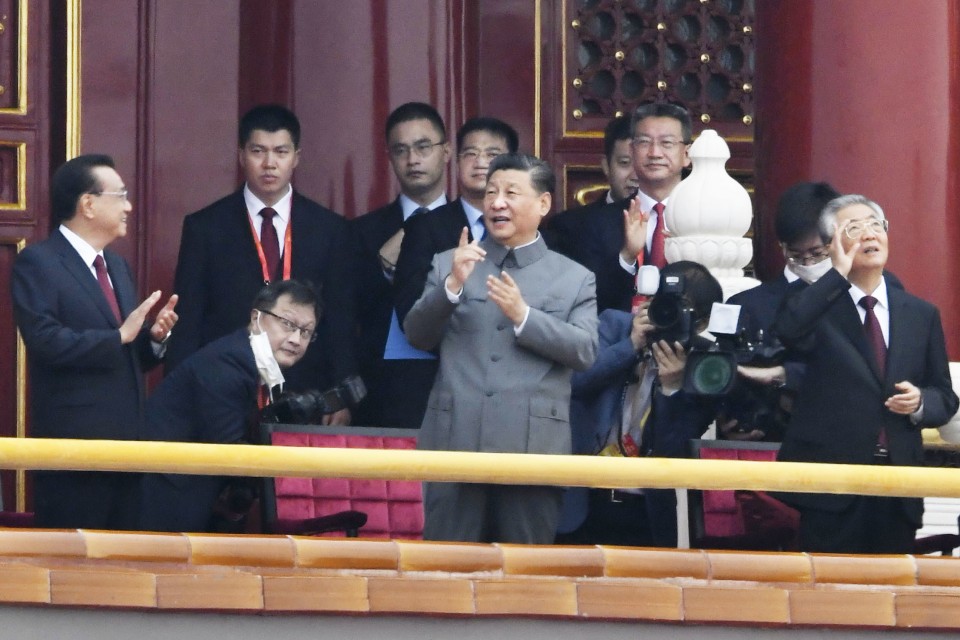 Chinese President Xi Jinping (C) smiles at an event to celebrate the 100th anniversary of the founding of the Chinese Communist Party at Tiananmen Square in Beijing on July 1, 2021. (Kyodo) ==Kyodo

Some pundits say a bad impression of China among Japanese citizens has not necessarily been brought about by the Communist Party, adding the crux of the matter is their fundamentally biased perception of the fast-growing Asian country.

"Japanese that do visit and know China better have problems voicing their real experience back in Japan, too. It's a view not accepted by most," said Stephen Nagy, a senior associate professor at International Christian University in Tokyo.

There are "in-group and out-group dynamics in Japan where people harmonize with the majority," he added.

Chinese President Xi Jinping has taken a hardline approach to foreign powers, saying in a keynote speech at Thursday's celebration that if they bully China, they will face "broken heads and bloodshed in front of the iron Great Wall of the 1.4 billion Chinese people."

Many Chinese citizens have apparently shared concern that the ruling party's aggressive and assertive posture toward Hong Kong, Taiwan and the South and East China seas might be posing a serious threat to the nation's neighbors including Japan. 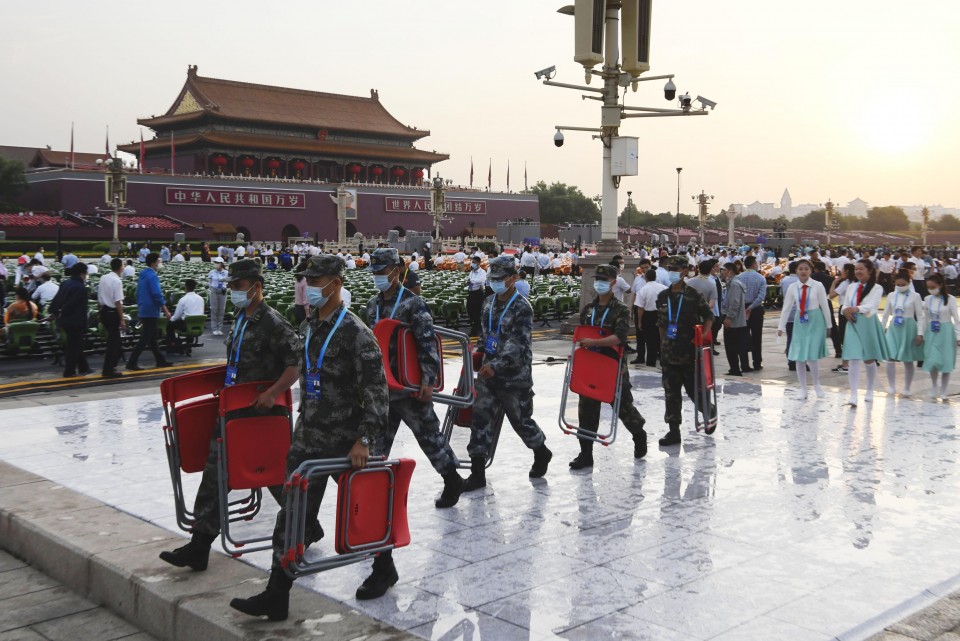 People prepare for the start of an event to celebrate the 100th anniversary of the founding of the Chinese Communist Party on July 1, 2021, at Tiananmen Square in Beijing. (Kyodo) ==Kyodo

They have also expressed fears that issues lambasted by the United States, such as Beijing's alleged intellectual property theft and human rights abuses in Xinjiang, could prompt more Japanese companies to leave the Chinese market.

The Communist-led government's reported attempt to cover up information about the virus in the initial stages of the outbreak "has dealt a crucial blow to the image of China," Zhang said.

Indeed, the number of Japanese who have positive feelings about mainland China has been decreasing recently.

The ratio of Japanese who have an "unfavorable" impression of China was 89.7 percent in 2020, up 5 points from the previous year, according to a survey by the Genron NPO, an independent think tank in Japan.

Among them, 57.4 percent criticized the intrusion of Chinese vessels into the waters surrounding the Tokyo-controlled Senkaku Islands, claimed by Beijing, in the East China Sea, while 47.0 percent said they feel discomfort with the Communist one-party rule.

Meanwhile, the survey, conducted between September and October last year, showed 45.2 percent of Chinese answered they have a "favorable" image of Japan. The percentage was the second-highest since comparative data became available in 2005.

The most common reason for the Chinese positive attitude toward Japan was because Japanese are "polite" and they "put emphasis on manners" with "high cultural standards," the organization said.

Japan invaded a huge swath of China before the end of World War II that lasted until 1945. Against a backdrop of anti-Japanese education by the Communist Party, many Chinese are thought to harbor negative feelings about Japan. 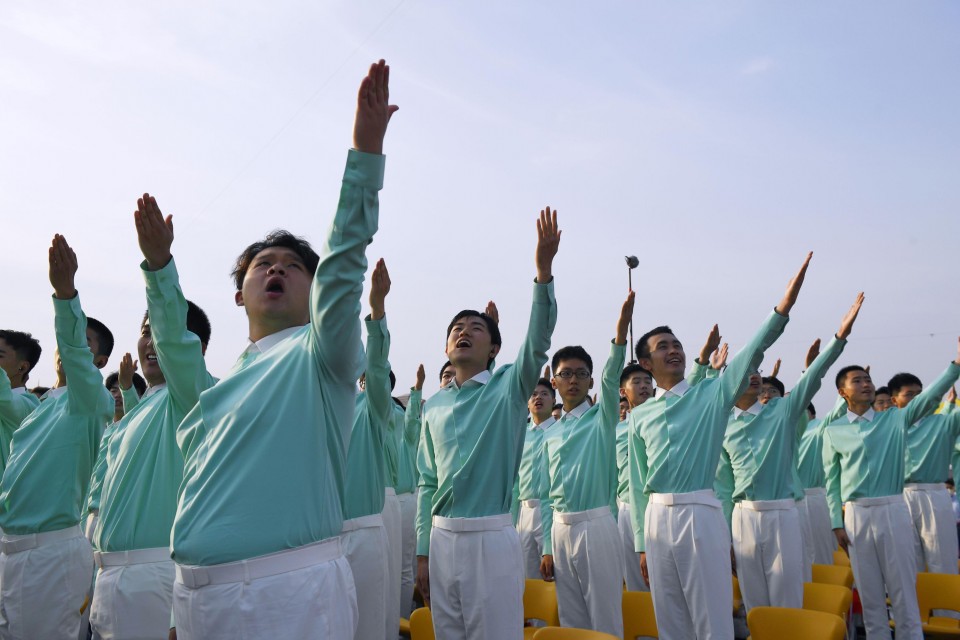 Performers practice before an event to celebrate the 100th anniversary of the founding of the Chinese Communist Party on July 1, 2021, at Tiananmen Square in Beijing. (Kyodo) ==Kyodo

"Most of my Chinese friends who have visited Japan, however, say they have become fond of Japan. They like Japanese animations and dramas as well as Japanese senses of hospitality, cleanliness and safety," said Yang Mei, a housekeeper in her 50s.

"If Japanese come to China, they may like China. I want them to change their impression of our country, filled with state-of-the-art technology," she added.

Japan has clearly lagged behind the world's second-largest economy in digital technology, which Japanese people who have not made a trip to China cannot be aware of.

In China, owners of smartphones now use them for just about everything from bike-sharing services to taxis and they pay without cash at almost all restaurants and stores -- whether they be kiosks in a village or luxury department stores in a city.

A robot with wheels carries a delivered product to a room in some apartments. Facial recognition surveillance cameras have been utilized nationwide to crack down on traffic rule violations.

As for virus-related technology, a health code system installed in a smartphone shows whether a person has a high risk of infection, has a negative certificate of a virus test and has been vaccinated.

Nevertheless, a Japanese journalist in China said, "We will never report such technologies in a positive manner, given that using them coincides with revealing personal information, which would be checked by the Communist Party or utilized as sources of big data."

"We should always be suspicious about China's moves that could jeopardize security of Japan. China, in this case, refers to the Communist Party, not a nation composed of ordinary Chinese citizens," he said.

But an Asian diplomat familiar with Japan-China ties shrugged off the remarks, saying Japanese journalists "just do not want to report good aspects of China because they have basically mocked Chinese since the end of World War II." 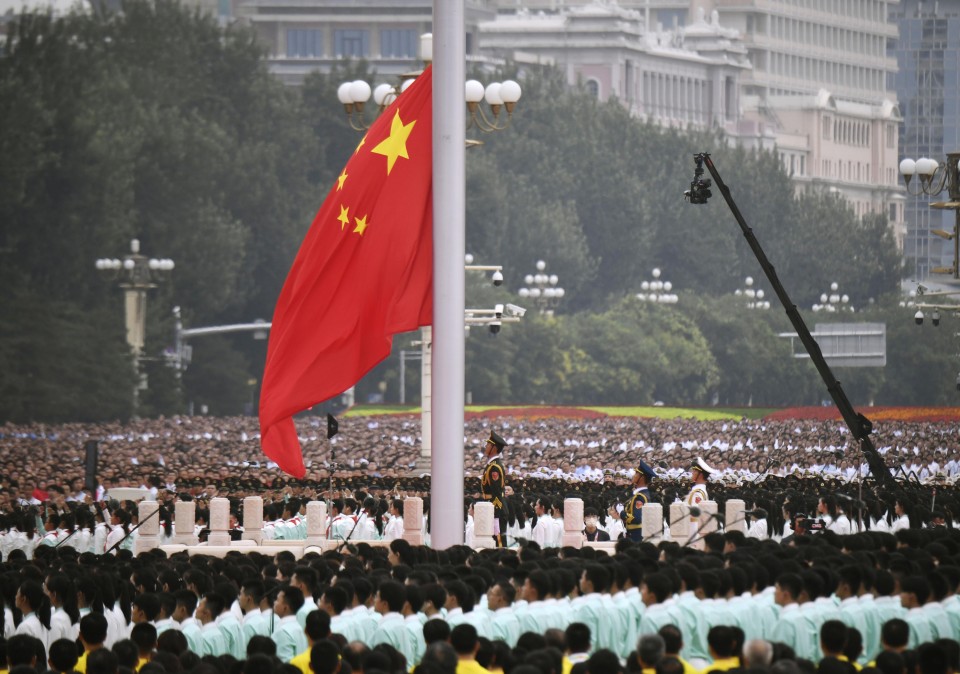 China celebrates the 100th anniversary of the founding of its Communist Party on July 1, 2021, at Tiananmen Square in Beijing. (Kyodo) ==Kyodo

"Many Japanese have yet to be able to accept the fact that Japanese technology is no longer superior to that of China in some fields. They still want to believe China continues to make imitations by stealing Japanese technology," the diplomat said.

"Should some Japanese journalists try to report a positive phenomenon in China, others would reject it. They would not dare to do so again. Under such circumstances, Japanese will not have a good image of China."

Li Xinyuan, a 36-year-old engineer, said, "Not all of the Chinese citizens are compliant with the Communist Party. I hope Japanese will watch China without prejudice and get along with Chinese, who are essentially kind and friendly."

Nagy said the "lack of knowledge" is partly to blame for Japanese not warming up to Chinese.

"More direct experience with China will improve this situation," but "that will be difficult over the next few years" in the aftermath of the virus spread, he said.