Japan's latest coronavirus state of emergency covering Tokyo, declared by the government Thursday, could cost the economy around 1 trillion yen ($9.1 billion), according to economists' estimates.

The government's decision to place the Japanese capital under a fourth state of emergency and extend an emergency in the southern island prefecture of Okinawa will cut private consumption by 1.2 trillion yen, said Toshihiro Nagahama, chief economist at the Dai-ichi Life Research Institute. 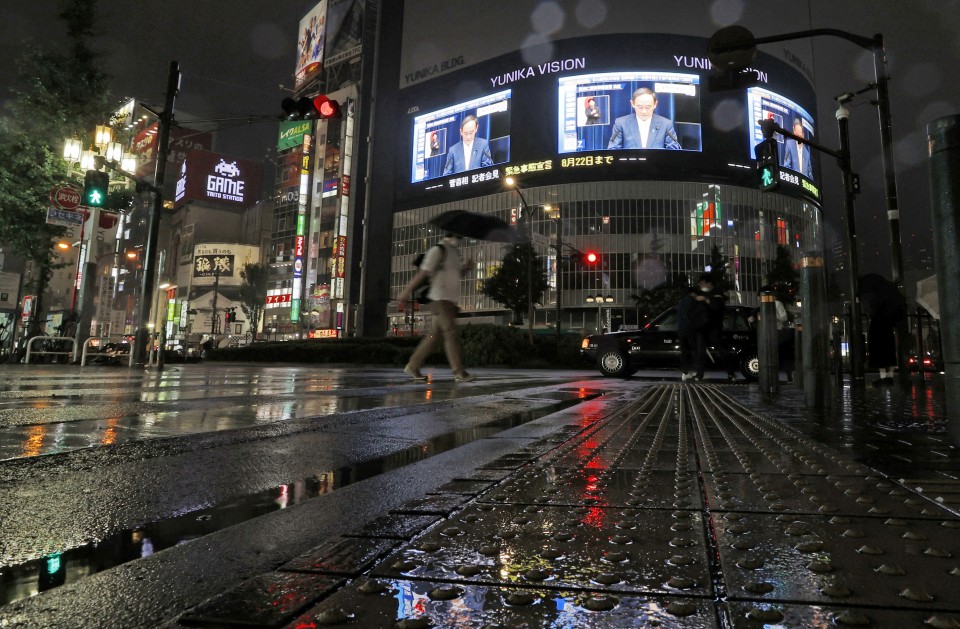 Large screens in Tokyo's Shinjuku area show Japanese Prime Minister Yoshihide Suga meeting the press in Tokyo over his government's decision to place the capital under a fresh COVID-19 state of emergency amid a recent surge in infections. (Kyodo) ==Kyodo

"It's inevitable that due to the (latest state of) emergency, there will be more pressure to restrict economic activity," Nagahama said in a report, adding the number of unemployed people is forecast to increase by 55,000 in the next three months.

The latest emergency for Tokyo and the extension for Okinawa will take effect from Monday and last until Aug. 22, which would include the duration of the Olympics set to start on July 23. Under a state of emergency, restaurants and bars are banned, in principle, from serving alcohol, while dining establishments not offering alcohol are requested to close early.

Nagahama said the projected loss of consumption will cut gross domestic product by around 1.0 trillion yen, corresponding to around 0.7 percent in the July-September period, nearly an annualized 3 percent. The estimate subtracts the value of imports.

The emergency declaration followed a recent spike in coronavirus cases and the lifting on June 20 of the country's third COVID-19 emergency covering Tokyo as well as eight prefectures including Osaka and Kyoto. 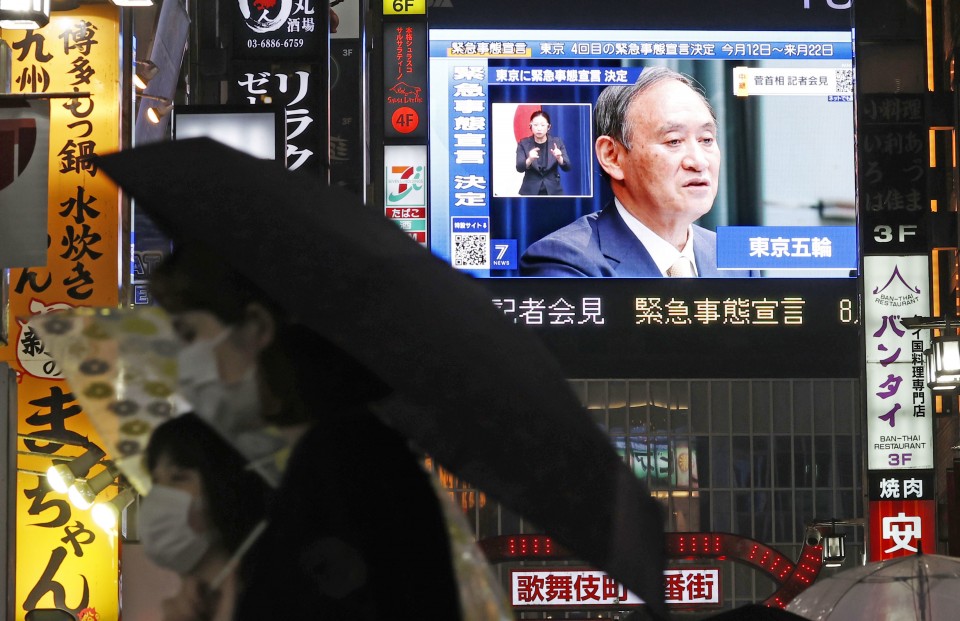 A large screen in Tokyo's Shinjuku area shows Japanese Prime Minister Yoshihide Suga meeting the press in Tokyo over his government's decision to place the capital under a fresh COVID-19 state of emergency amid a recent surge in infections. (Kyodo) ==Kyodo

He projected an additional loss of 146.8 billion yen if the Tokyo Olympics are held without spectators.

Given that a full-scale Olympics was estimated to generate 1.81 trillion yen in economic benefits for the Japanese economy, Kiuchi calculated around 62 percent of that figure would be cut if the Summer Games are held without spectators and as a result of other virus-related measures.

"If the emergency is further extended and expanded, the economic losses could outstrip the benefits of a behind-closed-doors Olympic Games," Kiuchi said.

Many analysts have said the world's third-largest economy could see negative growth in the April-June period for the second straight quarter, following an annualized 3.9 percent contraction in January to March mainly due to the second state of emergency that covered Tokyo and other populous areas.