A small beach town located about 80 kilometers from Tokyo has been preparing to host surfing's Olympic debut, and now it hopes it can ride the swell of momentum that will come by being at the sport's epicenter.

The town of Ichinomiya, and its approximately 12,000 residents, is looking forward to the positive impact brought by the Olympics, set to open on July 23, even though the coronavirus pandemic has proved a complicating factor for locals who are trying to make the most of the games. 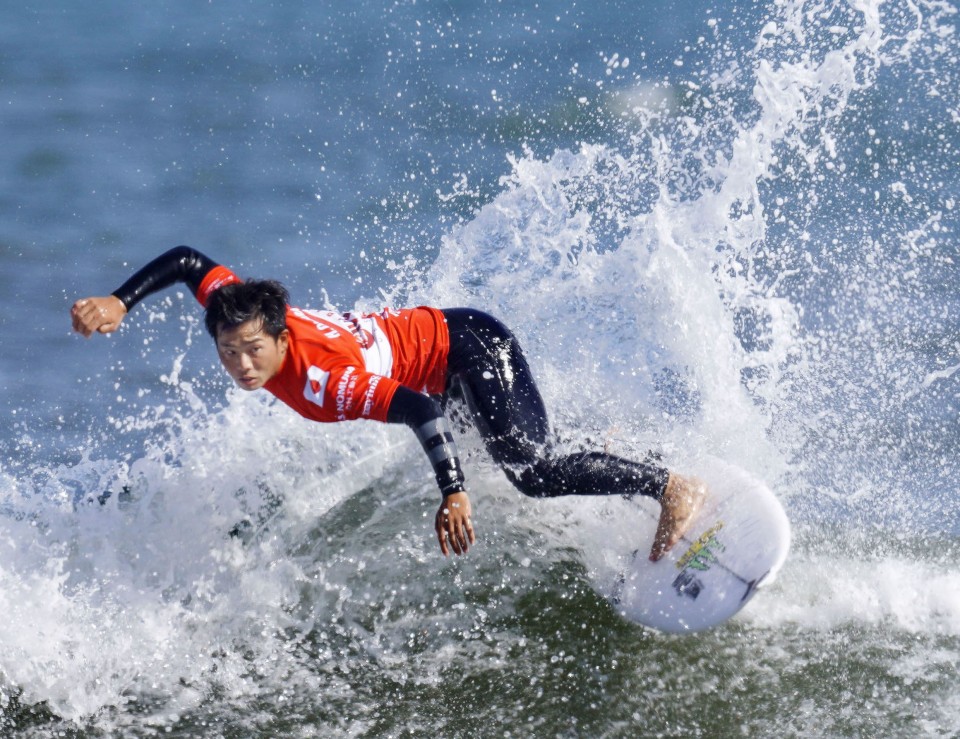 Hiroto Ohara surfs during a competition at Tsurigasaki Beach in Ichinomiya, Chiba Prefecture, on Nov. 1, 2020. (Kyodo)

For Toshimune Hashimoto, who owns a small hotel near the Olympic venue at Tsurigasaki Beach, the games have provided him a once-in-a-lifetime opportunity to host the U.S. surfing team and to witness how Hawaiian superstars like John John Florence and Carissa Moore prepare for competition.

"We've been able to take a longer time to prepare and focus on what needs to be done because of the postponement. Now, we are as ready as we can be to welcome the athletes," said Hashimoto, 42, a Tokyo native who moved to Ichinomiya, Chiba Prefecture, over two decades ago to pursue his passion for surfing. 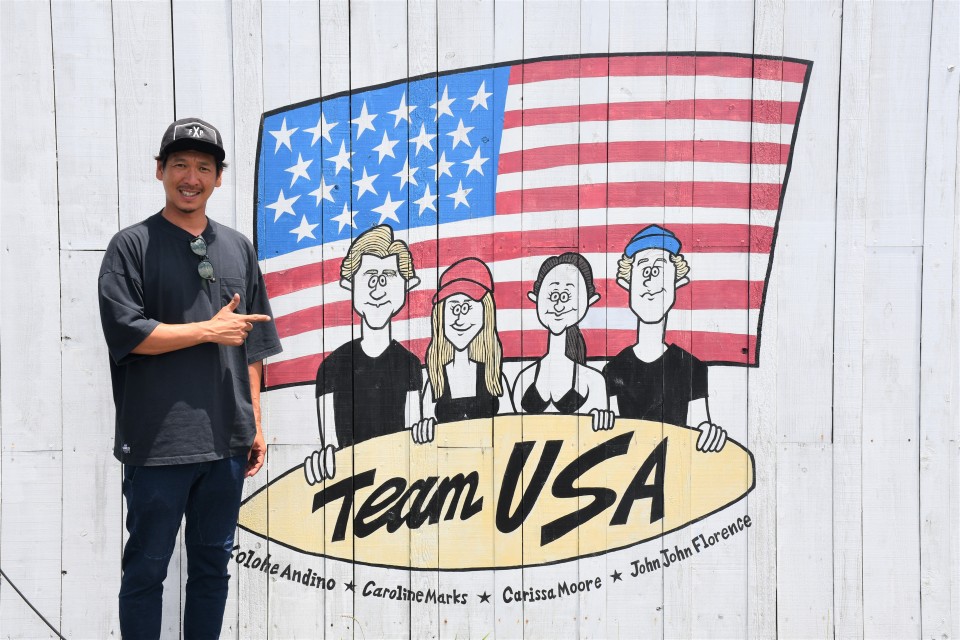 Toshimune Hashimoto poses for a photograph in front of a picture of the U.S. Olympic surfing team at Pension Third Place in Ichinomiya, Chiba Prefecture, on June 24, 2021. (Kyodo)

Since agreeing in 2018 to host the surfing powerhouse during the Olympics, Hashimoto has been working closely with U.S. officials to create a comfortable environment at Pension Third Place, his nine-room passion project.

His inn, a modern take on a beach house, stands out in the area, its darkly painted exterior offset by a striking wood-paneled hot tub patio in the rear. Palm trees frame the driveway leading to the solar panel-topped building that can accommodate up to 30 people.

He has built a detached garage where the U.S. surfers can train in comfort, while the kitchen was renovated on the Americans' dime with a new refrigerator and microwave purchased for the team's cook. 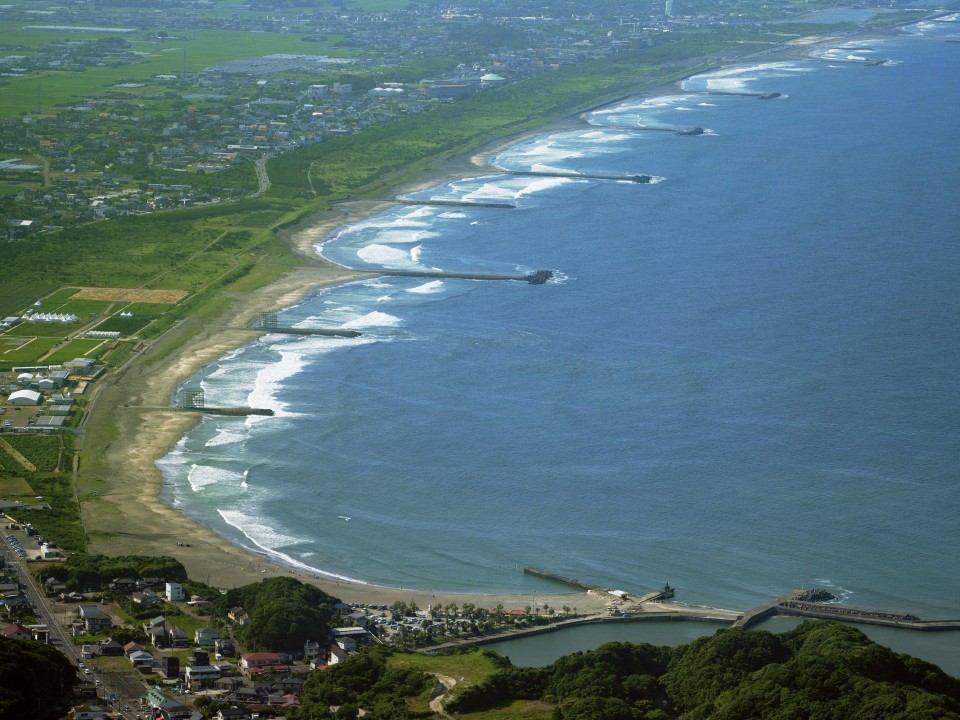 Photo taken from a Kyodo News helicopter on June 10, 2021, shows the area around Tsurigasaki Beach in Ichinomiya, Chiba Prefecture, which will hold surfing events during the Tokyo Olympics. (Kyodo)

As part of efforts to prevent a COVID-19 outbreak, the owner of the inn will stay in a bubble with the delegation, limiting his contact with people, including even his own family.

"It will be very exciting if the athletes win medals during their stay. I'm really pumped," Hashimoto said.

"It is a huge plus that the U.S. team chose to stay with us. I want to maximize this chance," he said, adding that he wants to share the legacy of hosting the U.S. surfers with future guests, even serving the same breakfast menu. 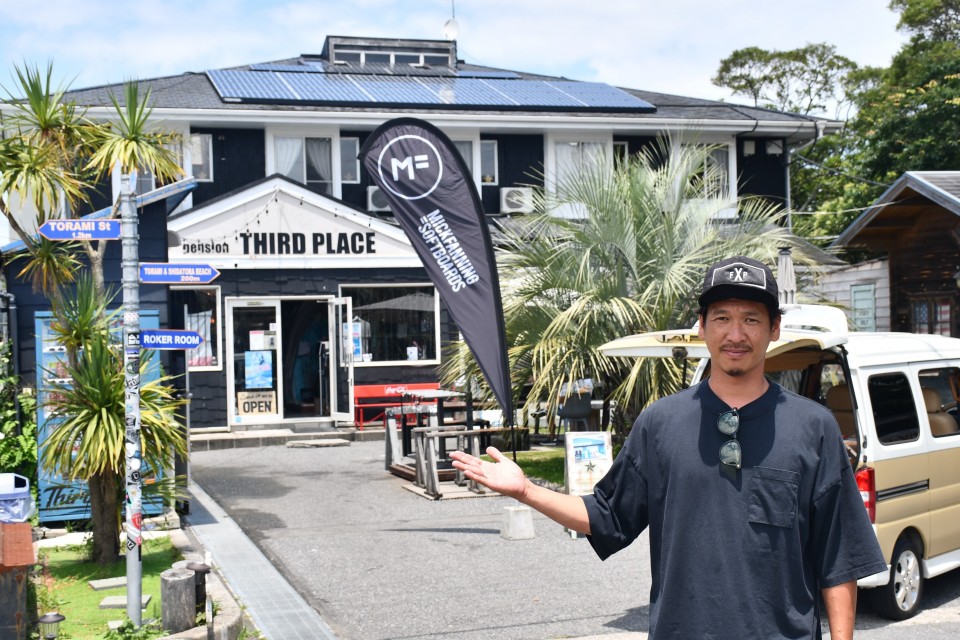 Toshimune Hashimoto poses for a photograph in front of Pension Third Place in Ichinomiya, Chiba Prefecture, on June 24, 2021. (Kyodo)

While small in size and population, Ichinomiya is one of Japan's major surf towns, drawing roughly 600,000 surfers in a normal year partly due to its proximity to Tokyo. The town has been welcoming to new residents who have moved to the town to live closer to the waves.

The road along the beach is dotted with surf shops and restaurants and the local government promotes a policy of "Surfonomics" to get the greatest possible financial benefit out of the sport.

"Surfing is an important cultural and economic pillar of the town," said Ichinomiya Mayor Masaya Mabuchi. "I hope the Olympics will improve the image of surfing in the town and that people will start referring to surfing as a sport rather than a hobby."

According to Mabuchi, between 2,000 and 3,000 Ichinomiya residents surf or have a job related to surfing, while roughly 40 percent of about 150 pupils at a local elementary school regularly hit the waves.

Hiroto Ohara, who was born and raised in the town, is among the 40 surfers from over 15 countries who will compete. Starting surfing at age 8, he earned qualification for the Olympics last month, giving locals another reason to look forward to the games.

"I'm so happy to be able to compete at home. It is where I started surfing and where I still surf," the 24-year-old said after clinching an Olympic spot.

"I know the most about the waves. It's no exaggeration to say that I learned all of my techniques (there). I want everyone to see my best surfing."

The mayor had initially expected to introduce the attractions of the town to thousands of visitors from around the world, but the Olympics will be held without spectators in and around Tokyo in an effort to prevent the spread of the virus.

The town canceled an eight-day event initially planned to coincide with the Olympics, during which local stores had hoped to see boosted sales and foot traffic.

"I have given up on trying to earn something from the Olympics themselves. There is nothing that can be done," he said. "But I still think it's possible to show the world Ichinomiya's surfing credentials."

Surfing is one of the five sports added to the Olympic program in 2016 following proposals by the Japanese organizing committee to bring youth-orientated sports to the games in hopes of attracting a more age-diverse audience.

The sport, which will be staged on the world-famous Teahupo'o wave in Tahiti during the 2024 Paris Olympics, is unique in the sense that competitors must assess variables like each wave's characteristics, the wind direction and the positioning of fellow competitors.

Even before the International Olympic Committee approved surfing as an addition to the games, Kiyohisa Uzawa, who heads a local association of surf shops, had been certain that Ichinomiya is the only place in Japan able to host, despite concerns that the waves at Tsurigasaki Beach in summer lack power and height. 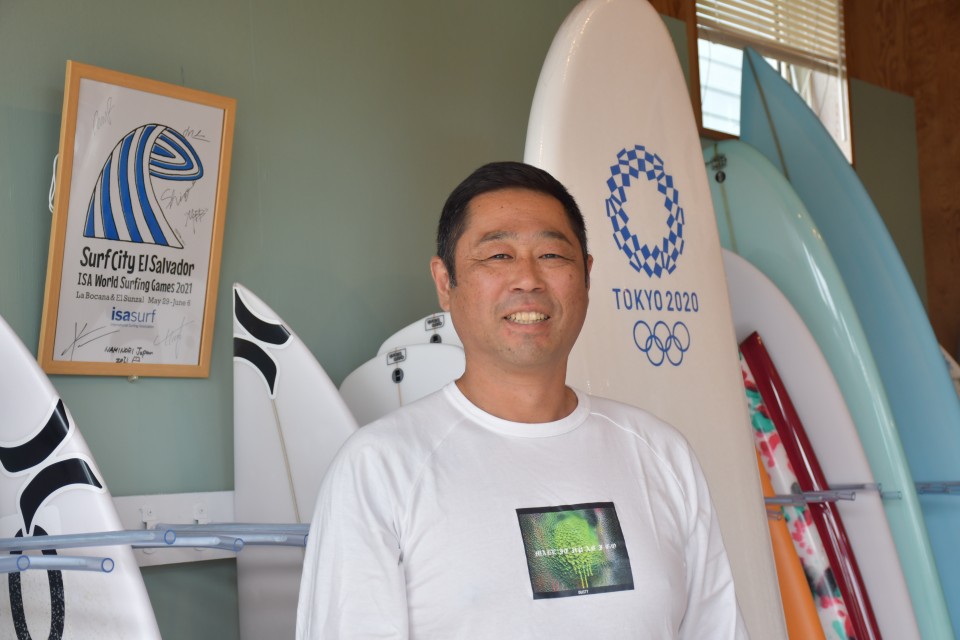 Kiyohisa Uzawa is pictured at his surf shop in Ichinomiya, Chiba Prefecture, on June 24, 2021. (Kyodo)

As a way to elevate the profile of Ichinomiya, Uzawa, also a member of the town council, worked to bring World Surf League events to the area to prove that the small town can stage megaevents.

"I was very confident that Ichinomiya can be the Olympic venue even when people doubted me," Uzawa said. "The waves here are very strong so surfers can pull off tricks."

While the Olympics will look completely different from what he had imagined due to COVID-19 restrictions, he wants the games to be an agent of lasting positive change, especially as a source of inspiration to kids taking to the waves for the first time.

"After all, the world's top surfers are heroes to kids. I want them to grow up remembering how Ichinomiya staged the first-ever Olympic surfing event," Uzawa said.