Surging coronavirus cases in Southeast Asia, in such countries as Malaysia and Indonesia, have started affecting the supply chains of Japanese companies, with the possibility of regional production disruption becoming more real.

In Malaysia, where lockdown has been in place since June 1, plants belonging to Toyota Motor Corp. and Honda Motor Co. remain closed. That is largely because of regulations that limit factory workers reporting to work to 10 percent or less.

The lockdown has already been extended twice, with more stringent restrictions imposed July 5 on Malaysia's capital region, where Japanese companies operating in the country are concentrated. 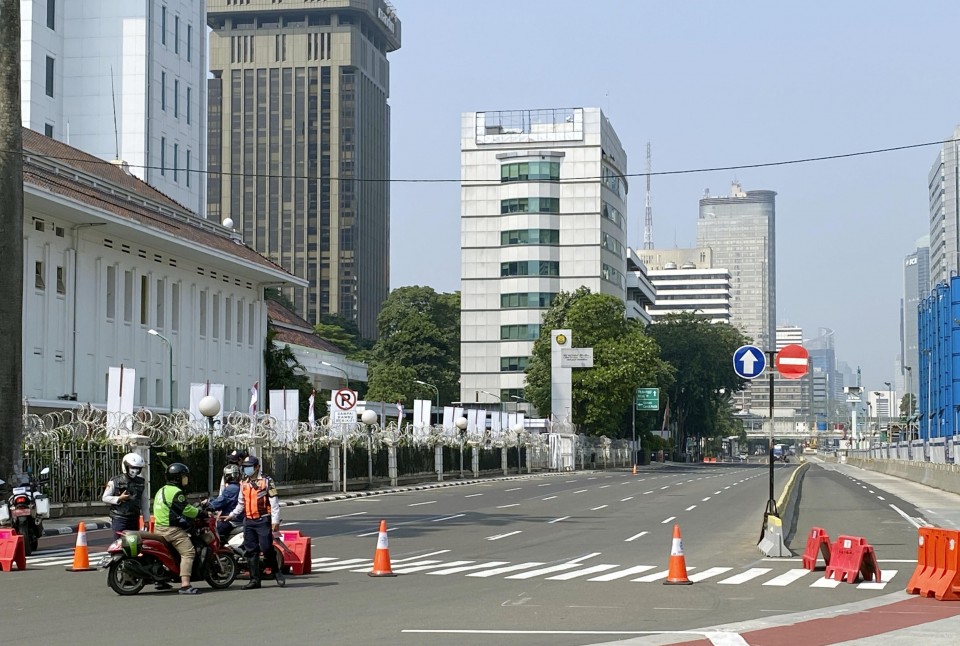 A road is blocked in central Jakarta on July 6, 2021, as the Indonesian capital sees a rapid spread of the Delta coronavirus variant. (Kyodo) ==Kyodo

Mitsui Mining & Smelting Co., which makes smartphone materials in Malaysia, announced a production halt on July 5. Even though the government has since allowed the electronics industry to resume work, a press representative of the company says production will not return to earlier levels until sometime between late July and early August.

Japanese companies have also been hit hard in Indonesia, where daily new infections surpassed 40,000 on Monday. A survey conducted by the Japan External Trade Organization showed manufacturer after manufacturer decrying the increase in infections and the impact on their operations. One company reported having 18 percent of its workforce infected, creating problems for its operations.

Also finding it difficult to operate at full capacity due to restrictions imposed on people's movements, many Japanese companies operating in Indonesia are considering sending their Japanese expatriates back home.

An official of a Japanese automaker posted in Southeast Asia said the difference between the coronavirus pandemic and natural disasters lies in the former having a long-term impact on supply chains and hitting multiple areas simultaneously.

The official said that in Southeast Asia, where vaccine rollouts remain slow, it is difficult to make a one-year forecast, much less longer ones.

Thailand, considered a linchpin of Japanese companies' production networks in the region, has had a curfew imposed on the Bangkok region since Monday. But that has yet to be accompanied by strong restrictions on corporate operations. A Japanese electronics company suggested that the curfew's impact is expected to be limited.

Vietnam, once touted widely for successfully containing the pandemic, is experiencing a surge in cases in its largest city, Ho Chi Minh City.

So Kitami, a researcher at JETRO Bangkok, said that while Japanese companies are doing their best amid the pandemic, "there is a possibility that if infections continue to spread in other countries, regulations as strong as Malaysia's could be adopted there."

"That could sap the appetite for investment," he said.