A total of 80.5 percent of university seniors in Japan who are scheduled to graduate next March have secured job offers as of July 1, an improvement from last year when job-hunting was affected by the coronavirus pandemic, according to a survey.

The online survey by Recruit Co., the operator of the Rikunabi job information website, showed the figure was 7.3 percentage points higher than the 73.2 percent in the same period in 2020, when the selection process was delayed due to the spread of virus infections. 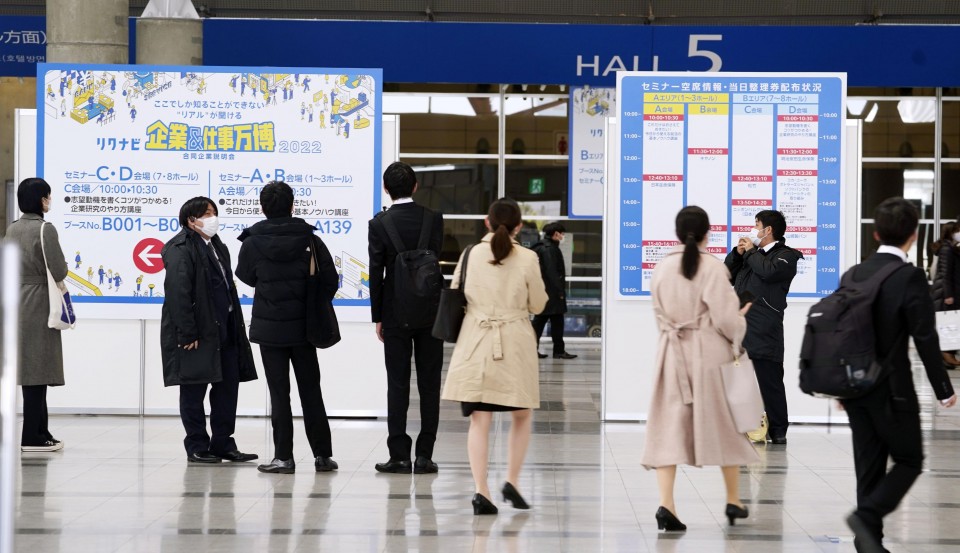 Job seekers head to an information fair in Chiba, east of Tokyo, on March 1, 2021. (Kyodo)

However, the rate was slightly lower than the 85.1 percent in the same period in 2019 before the virus outbreak, as more students especially those living in rural areas aim to become civil servants, perceived as a stable job amid the pandemic, Recruit said.

The selection process for civil servants often begins after the summer and the poll was conducted earlier this month, with 1,045 university students responding, according to the Tokyo-based company.

Recruit said the rate of students in the Kanto region centering on Tokyo who want to work as public servants was 8.6 percent, almost unchanged from the figure for 2020 graduates.

On the other hand, in rural areas away from major cities of Tokyo, Osaka in the Kinki region and Nagoya in the Chubu region, 18.8 percent of university seniors said they aim to become civil servants, up 8.6 percentage points from the figure for students who graduated in the spring of 2020.

Reflecting that trend, 77.7 percent of university seniors in areas outside of the Kanto, Chubu, and Kinki regions have secured job offers as of July 1, lower than the 87.2 percent in the same period in 2019.

Zen Masumoto, head of the Recruit research institute, said, "Students without job offers may be worried, but there have been many university seniors who got job offers after July. I hope they can find a company that is a good match for them."