Prime Minister Yoshihide Suga's government put Tokyo under its fourth COVID-19 state of emergency on Monday in an effort to contain a resurgence in coronavirus infections.

With the measure, to last until Aug. 22, a period that will cover the duration of the Tokyo Olympics, the government aims to curb the movement of people during the global sports event, as well as the summer vacation period including Japan's Bon holiday in mid-August.

The Summer Games, which will open July 23 and end Aug. 8, will be held behind closed doors at almost all venues. 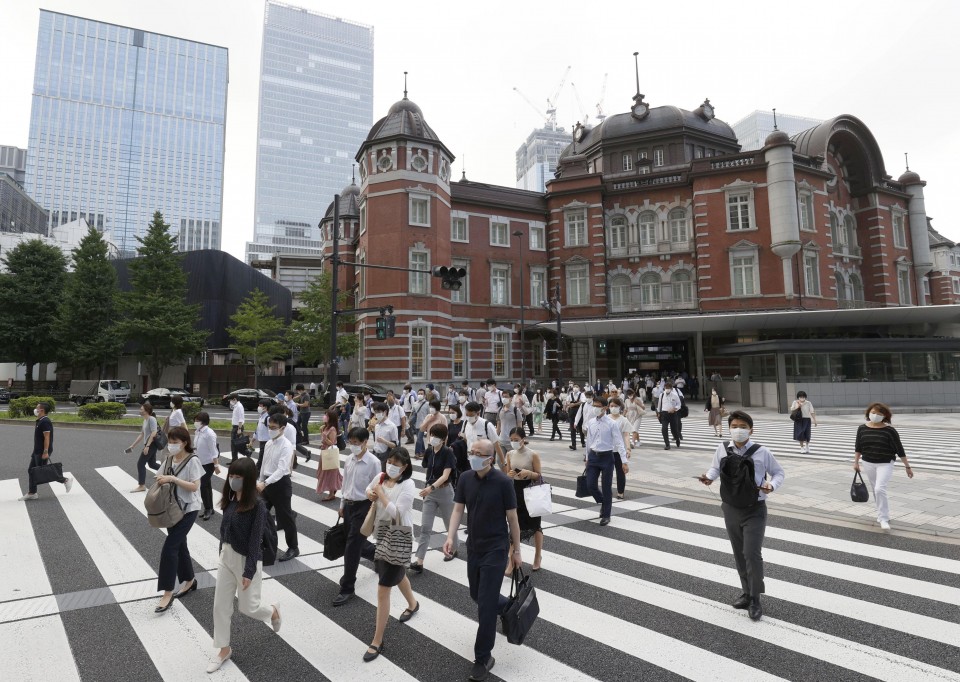 With the fresh emergency in place, some people voiced fear over an increase in infections in the country, as well as dissatisfaction toward the government's pandemic response.

"It is natural to have the games with no spectators, but I believe it would surely increase the flow of people. I'm worried that it could lead to a further rise in the number of infections," said Toshihiro Numata, a 60-year-old worker in the city of Yokohama, near Tokyo.

A woman in her 50s from Tokyo's Minato Ward expressed frustration over the government's repeated declaration of COVID-19 emergencies in the capital, saying, "I don't see any point in having the same measure (of emergency) being repeated. Also, I think there is not enough explanation from the government about its purpose."

"I want the government to take more short-term measures such as quickly delivering the vaccines," said Toru Kamada, a resident of the city of Yao in Osaka.

The country's vaccination rate lags far behind other developed nations and recent vaccine supply shortages have caused confusion, with many municipalities forced to restrict their acceptance of reservations while new applications by companies for workplace inoculations have been suspended.

Chief Cabinet Secretary Katsunobu Kato said the state of emergency was declared to prevent the spread of the coronavirus from Tokyo during the summer break and Bon holiday period.

"We ask the people for their understanding and cooperation as the declaration this round is to make sure we prevent the nationwide explosion of infections until vaccination progresses," Kato said at a regular press conference.

The quasi-state of emergency in five other prefectures -- Hokkaido, Aichi, Kyoto, Hyogo and Fukuoka -- expired at midnight Sunday as scheduled.

Compared to a state of emergency, a semi-measure carries fewer restrictions on business activity and targets high-risk areas rather than entire prefectures.

In areas under the state of emergency, food service establishments are prohibited from serving alcohol and are required to close by 8 p.m.

Under the quasi-state of emergency, serving alcohol is banned in principle, but some establishments may be allowed to serve alcohol up to 7 p.m., subject to the local governor's approval, with proper anti-virus measures in place.

The two airlines, however, continue to serve liquor at their lounges in Narita airport in Chiba Prefecture, near Tokyo, and Osaka's Kansai International Airport from 11 a.m. to 9 p.m.

In Tokyo, major commercial facilities are obliged to close by 8 p.m. Attendance at large events is capped at 5,000 people or 50 percent of a venue's capacity, whichever is fewer.

The capital entered into its first COVID-19 state of emergency in April 2020 and a second emergency in January this year.

Suga declared a third emergency for Tokyo in April, which had been initially scheduled to last about two weeks but was extended until June 20.

The emergency was eased to a semi-emergency for Tokyo on June 21 but it went back to the fourth emergency after just about three weeks due to the recent rebound in infections.