Sports editors from over 10 major U.S. media outlets have sent a letter of protest to organizers of the Tokyo Olympics, saying their anti-COVID-19 rules and restrictions run counter to press freedoms.

The letter dated Monday, a copy of which was seen by Kyodo News, said a ban on visiting foreign journalists interviewing spectators and conducting interviews is a "clear overreach" targeted at them as media in Japan will not face the same restrictions, regardless of their vaccination status. 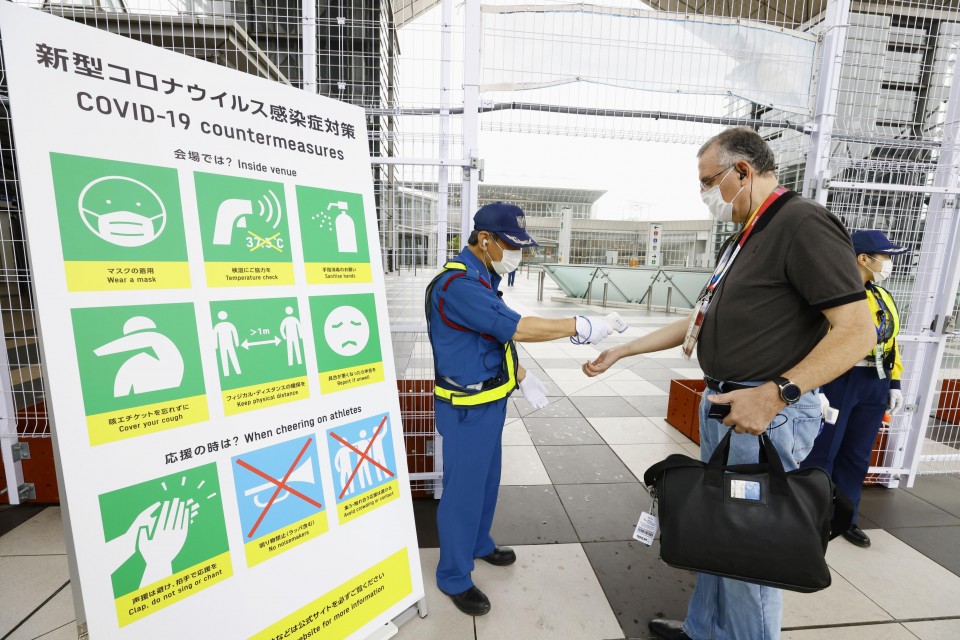 A member (R) of the media wearing a mask for protection against the coronavirus has his temperature checked on July 1, 2021, at the entrance of the main press center for the Tokyo Olympics, which opened the same day at the Tokyo Big Sight exhibition center. (Kyodo) ==Kyodo

"Some of these measures we have described go beyond limiting the spread of the virus and speak directly and chiefly to press freedoms," said the letter, written by editors of such media outlets as The New York Times, The Washington Post and USA Today.

The COVID-19 rule book released by the organizers states that foreign journalists cannot interview spectators or conduct interviews in Tokyo for their first 14 days in Japan. It also stipulates that they must turn on location information services on their smartphones at the airport and the data may be used by the organizers.

The editors requested that journalists be allowed to "engage in routine newsgathering," provided they wear face masks and maintain physical distancing, while calling for severe restrictions to be reconsidered with "respect to common sense and without stifling press freedoms."

The letter was sent to International Olympic Committee chief Thomas Bach and Seiko Hashimoto, president of the Tokyo organizing committee, among other officials, at a time when the Japanese capital has seen an uptick in COVID-19 infections, fueling concern over hosting the games during a global health crisis.

The Tokyo Olympics, which will open on July 23 following a one-year postponement, are expected to involve about 4,600 media personnel from abroad, the number reduced to about half from the initial plan in an effort to prevent the spread of the virus.

Medical experts have expressed fears that the games will contribute to triggering a spike in infections in Japan and other countries, while public support for the Olympics remains low.

Two members of the Ugandan delegation that arrived in Japan for the games have tested positive for the virus, leading to further debate over whether the anti-virus measures being taken by the Japanese government and organizers are sufficient. 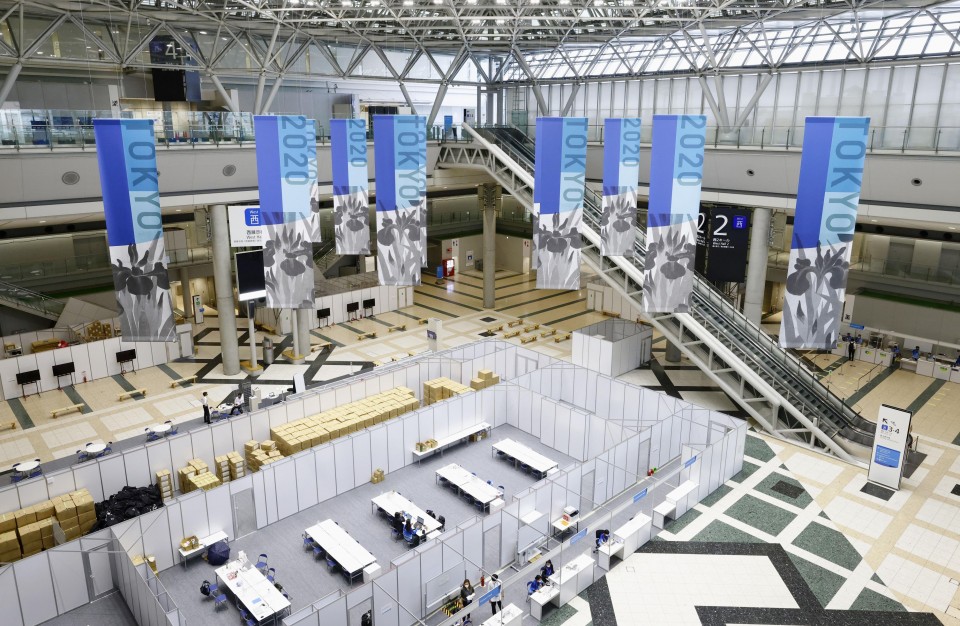 The main press center for the Tokyo Olympics opens on July 1, 2021, at the Tokyo Big Sight exhibition center. (Kyodo) ==Kyodo

The letter also said the smartphone app developed by Japan to collect health information from games participants poses a "privacy and security concern" because it gathers personal information without providing specifics on how the data will be used.

Randy Archibold, a sports editor at The New York Times, told Kyodo News that the Olympic Charter "calls for 'all necessary steps in order to ensure the fullest coverage by the different media and the widest possible audience in the world for the Olympic Games.'"

"I fear the tracking and permissions-seeking on movements go beyond measures of safety that, to be clear, we fully expect and set a dangerous precedent in conflict with the ideals of a free press," he said in an email.

On Thursday, the Japanese organizing committee pre-opened the main press center at Tokyo Big Sight, a convention and exhibition center. The center, which will officially open on July 13, is expected to be used by up to 2,500 people per day.

The committee later said it had sent a reply to the editors seeking their understanding over the restrictions.

"Given the current situation, we need to take very strict measures, which we consider important for all participants and residents of Japan," it said in a statement.