Japanese badminton star Kento Momota has had a rollercoaster journey to the Tokyo Games, but the 26-year-old is determined to pay back those who have supported his Olympic quest after a gambling scandal cost him a place in Rio de Janeiro four years ago.

Momota was a clear medal hopeful ahead of the Rio Games, only to miss out when he was banned from the court indefinitely in April that year by the Japan Badminton Association for gambling at illegal casinos. 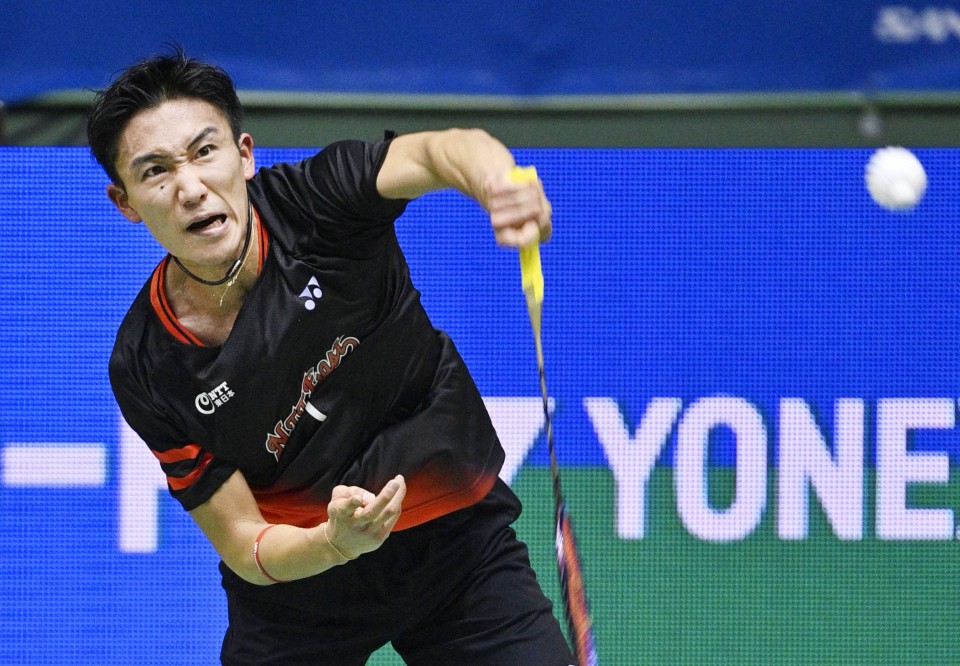 File photo shows Kento Momota in the men's singles final of the national badminton championships in Tokyo in December 2020. (Kyodo)

Momota, who was ranked No. 2 in the world at the time of his ban, made his competitive return just over a year later in May 2017, and he has been on top form ever since.

The national champion during his elementary, junior high and high school days, Momota became the first Japanese male to win a men's singles world championship in 2018 and went on to successfully defend his title the following year.

"I definitely have that feeling of finally making the games," said Momota.

"I had really a lot of support from people, having missed the last one (in Rio), and I want to pay them back."

When a magnitude 9.0 earthquake quake struck northeastern Japan in March 2011 and triggered a nuclear crisis, he was alone in Indonesia taking part in a junior tournament.

His high school back home is roughly 10 kilometers from the Fukushima Daiichi nuclear power plant which suffered a multiple-reactor meltdown from the quake and subsequent tsunami.

Momota was able to link up with 15 of his 23 teammates two months later at a training base in Inawashiro in central Fukushima, although eight had left to attend other schools.

"It was really emotional...they were like family members more than teammates," said Momota. "Fukushima is my second home. It's not an overstatement to say my badminton career was nurtured in Fukushima, it's a place that raised me."

The Tokyo Olympics' postponement meant the big stage arrives not long after the 10th anniversary of the earthquake and tsunami, yet that tragedy is only one of a number of setbacks the shuttler has had to overcome.

Momota was forced to ponder his future, asking Japan's South Korean head coach Park Joo Bong, "will playing badminton be okay?" after he was involved in a fatal car crash in January 2020 just hours after winning the Malaysia Masters.

The driver of his vehicle died in the accident, while Momota, who set the world record of 11 international tournament wins in 2019, suffered a number of facial injuries.

Three facial lacerations and bruises on his entire body were found during the initial checkup after returning home. The shocking news about one of the Olympic host's top gold medal hopefuls again saw him generating headlines in his homeland.

Watching his rivals in action at the All England Open in March that year from afar was difficult to take, with the Tokyo Olympics' originally scheduled start just months away.

The games' one-year postponement announced later that month due to the COVID-19 pandemic, therefore, turned out to be a blessing. With extra time made available, the challenge began for Momota add offensive firepower at the gym.

"There won't be a (long) period like this when I can tackle something, and I want to take it seriously," said Momota at the time. He has since hit the gym, bulking up while dropping his body-fat percentage.

Momota claimed the national title in December, 11 months after the car crash, and then contracted COVID-19 this January to add to his long list of mishaps.

He went out in the last eight at this year's All England Open, the final tournament before the Olympics. But having matured as a man, the world's top-ranked player is confident of achieving his dream.

"You never know what will happen in life. I felt one really has to live trying not to regret any past moment," he said.

"I couldn't say 'I'm going for the gold medal' with the mentality I had at the time (five years ago). Now I can say it clearly with a sense of resolution. That's proof that I've been working hard while taking a good look at myself."