Athletes villages at the Olympics and Paralympics are places where competitors can put aside their sporting rivalries to socialize and mix before they celebrate or commiserate when their athletic commitments are over.

At least, that has been the case until now. But for the Tokyo Games, the competitor accommodation hubs will be starkly different from usual, with athletes required to effectively live in an isolated bubble from which they will have to adhere to strict anti-coronavirus regulations.

The main village in the waterfront Harumi district of Tokyo is set to welcome some 18,000 athletes and team members during the games after it was revamped to cope with the evolving COVID-19 situation. 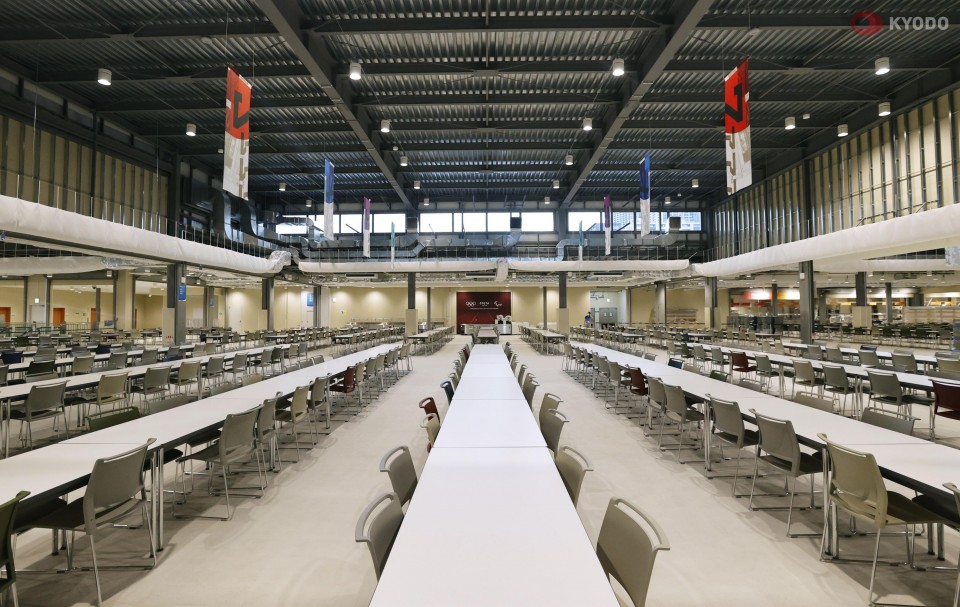 The most prominent pandemic-related addition at the Harumi village is a new fever clinic set up to provide medical care and polymerase chain reaction tests to residents who suspect they may have been infected with the coronavirus. Symptoms or not, athletes will be tested daily in the village.

The clinic, set up in May, has been in operation since July 1 in a temporary structure at the center of the 44-hectare main village. It is solely dedicated to diagnosing suspected coronavirus cases and is separate from a polyclinic that offers ordinary medical services.

The village officially opens on July 13, 10 days before the Olympic opening ceremony, and will serve as a base for athletes until three days after the closing ceremony on Aug. 8. The site will formally welcome Paralympic teams between Aug. 17 and Sept. 8.

The complex is surrounded by sea on three sides and has views of Tokyo Bay and the Rainbow Bridge, but residents are expected to enjoy the atmosphere alone with areas to congregate reduced in size. Visitor numbers have also been slashed and seating areas in dining halls cut by one-third.

Olympic athletes are requested to check-in no more than five days before they compete and para-athletes seven days before. They are then required to vacate the villages within two days of the end of their events.

"We needed to put a lot of restrictions on athletes. I imagine that being asked to put on masks at all times except when eating and in competition will be quite tough for international athletes," said Tokyo 2020 Village Mayor Saburo Kawabuchi.

"We also asked many things, like to leave dining halls as early as possible, even though at previous games athletes were able to mingle," Kawabuchi said. 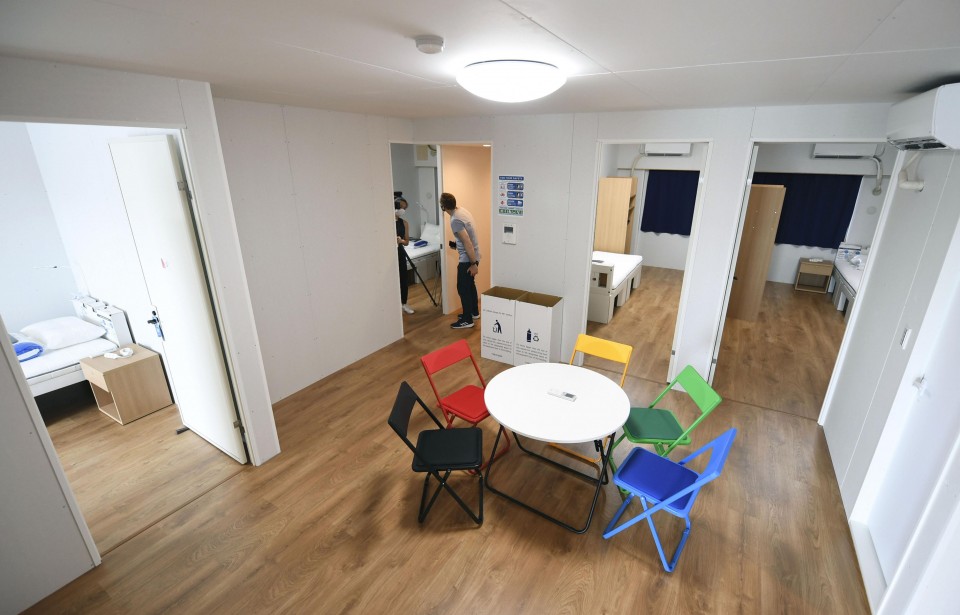 A room at the athletes' village for the Tokyo Olympics and Paralympics is shown to the media on June 20, 2021. (Pool photo) (Kyodo) ==Kyodo

The entry of families and guests to the Village Plaza, a site in the Harumi complex initially planned as the main social hub, will also be restricted.

"We built a replica room in the plaza because we heard that at past Olympics families and guests to the village who could not enter athletes' real rooms enjoyed getting a feel for their accommodations," said a representative of real estate giant Mitsui Fudosan Co., which will sell the residential buildings as apartments after the games.

"I imagine there will not be many visitors to the replica room," the official said.

It is not prohibited to bring alcohol into the villages, but residents are asked to drink alone in their rooms, a situation that is more than a little incongruent with the image of the celebrating post-competition medalist.

"They are not allowed to freely hold parties outdoors or at public spaces in the village," a sacrifice in line with those being made by the Japanese public during the pandemic, said Takashi Kitajima, general manager of the village, adding alcohol will not be sold.

Athletes and officials are asked to wear masks, keep mealtimes as short as possible, eat alone and always maintain physical distancing in the villages.

Signage and floor stickers are prominent all over the villages to ensure social distancing remains always front of mind.

Over 80 percent of athletes who will stay in the villages are expected to be vaccinated before arriving in Japan, according to the International Olympic Committee, while inoculations of volunteers and other staff have also started using shots procured by the international sporting body.

Some 8,000 such staff are expected to work at the main village each day, according to the organizers who also pointed that they have vaccinated as many as possible, especially those who come into contact with athletes. 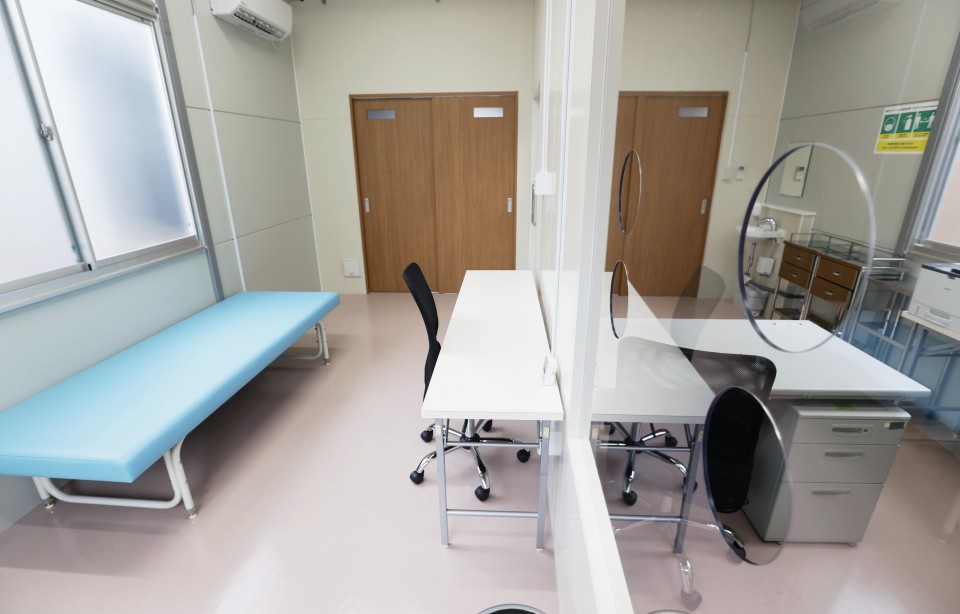 At the Harumi village, athletes are screened for the coronavirus daily using saliva testing kits in their rooms or office of their delegation and if found positive will be sent to the fever clinic for a PCR test.

Random testing by organizers could be conducted, while delegation officials are also asked to provide oversight.

The fever clinic, with some 20 doctors, 80 nurses and other medical personnel working on shifts, has two examination rooms equipped with negative pressure devices to prevent air inside the rooms from being released.

Doctors, separated from visitors by acrylic screens, take samples from test subjects' noses through holes cut in the transparent barriers.

As it will take about three hours to get test results, five isolation rooms at the clinic, with two featuring negative pressure devices, will be used as waiting spaces. Passageways at the clinic are also unidirectional to prevent people's paths from crossing. 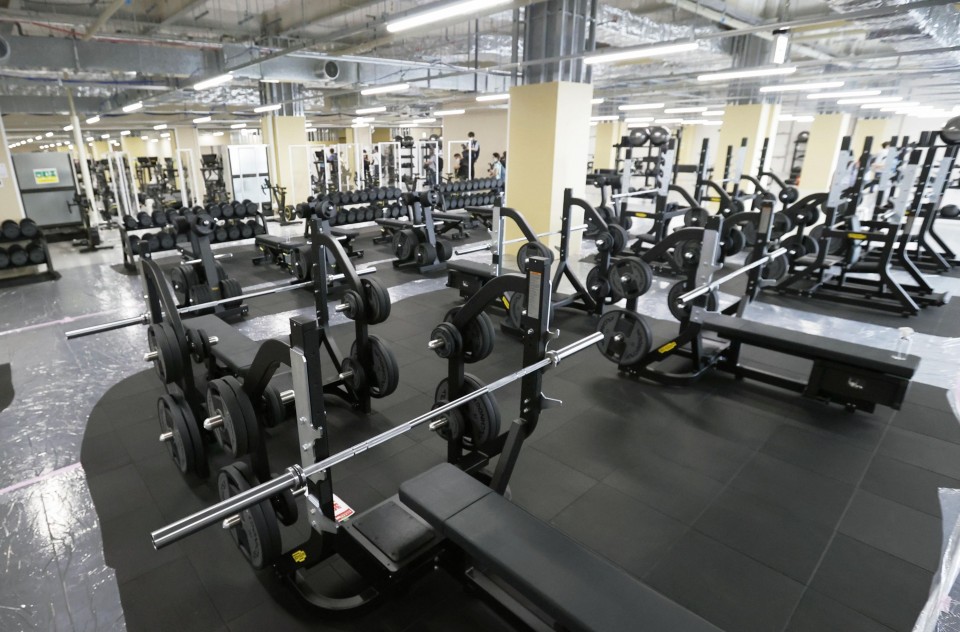 A training room in the Tokyo Olympic and Paralympic athletes' village is shown to the media on June 20, 2021. (Kyodo) ==Kyodo

A laboratory set up near the fever clinic is expected to analyze nearly 18,000 samples a day, according to the organizers.

Residential building ground floor areas in which athletes could congregate on sofas to watch TV have been closed or scaled back while the seating capacity of the largest dining hall has been cut to 3,000 from the initial 4,300.

Tables for six will now seat four and each diner is separated by partitions at the front and sides, with each asked to wipe their area down with a disinfectant when they are done.

Cameras have been set up overlooking public spaces such as the dining hall, casual dining area, fitness center and recreation space, to allow congestion levels to be monitored. 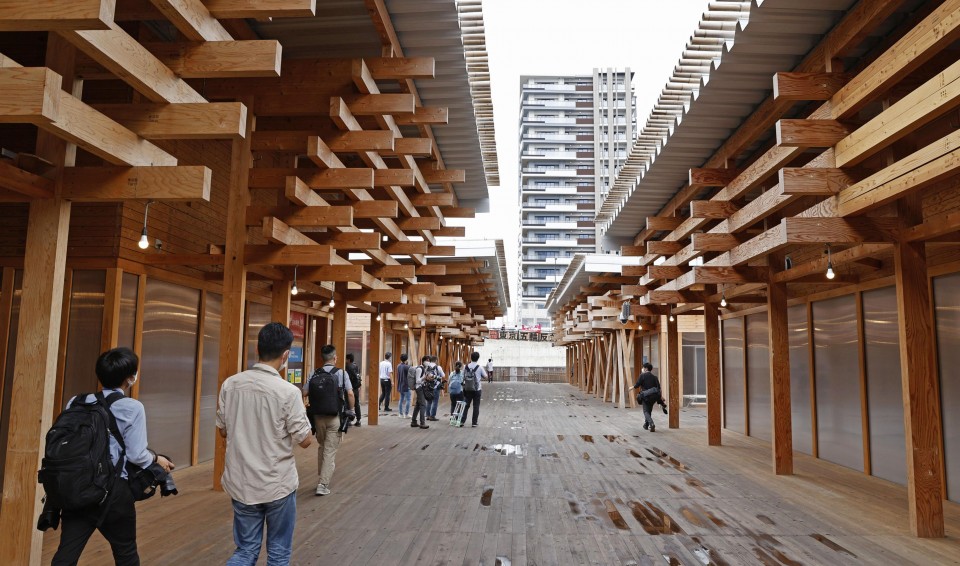 The Village Plaza, which will function as a social hub at the athletes' village for the Tokyo Olympics and Paralympics, is unveiled to the media on June 20, 2021. (Kyodo) ==Kyodo

Residents can then check on screens installed in multiple locations around the main village or on a smartphone app to see how busy areas are, with blue indicating the spot is 30 percent of capacity, full yellow 30 to 70 percent, and red over 70 percent.

Athletes and team officials should adjust their dining hours to avoid busy times, using the monitors to inform their plans, organizers said.

Worryingly, despite the extensive planning that has been undertaken, the organizing committee seemingly still comes up short when asked how it will respond to a major cluster of infections in the village.

"We will deal with the matter in collaboration with local authorities and the Tokyo metropolitan government," is all the detail village general manager Kitajima could provide when asked last month.