The government said Friday it will retract its plan to ask financial institutions to ensure restaurants follow the ban on serving alcohol during the latest state of emergency, only a day after it put forward the initiative as a way to strengthen its anti-coronavirus response.

Yasutoshi Nishimura, the minister in charge of Japan's coronavirus response, unveiled the controversial policy the previous day, drawing criticism that the government was attempting to use lenders to pressure such establishments. 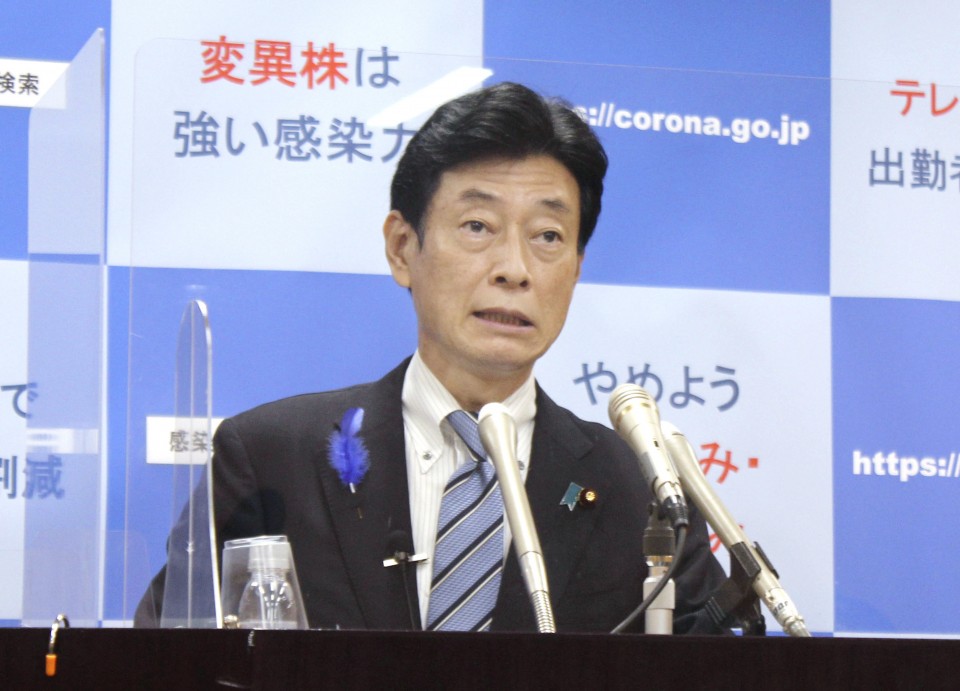 Yasutoshi Nishimura, the minister in charge of Japan's coronavirus response, is pictured at a press conference in Tokyo on July 9, 2021. (Kyodo)

Nishimura told him he will retract the policy as it had failed to secure the understanding of the public, Kato said.

Earlier Friday, Nishimura told reporters that the government would try to "fix the unfairness" felt between establishments that are earnestly obeying the government's request not to serve alcohol and those that are not.

Nishimura's remarks Thursday had drawn criticism from the main opposition Constitutional Democratic Party of Japan, which called the measure nothing but a threat to eateries.

"He is merely trying to threaten (the restaurants) and add constraints on them," said Jun Azumi, the CDPJ's Diet affairs chief, said, calling Nishimura's attitude "condescending."

He urged Nishimura to "resign immediately before drawing anger from the public."

Nishimura said Thursday the government will share with financial institutions information about their client restaurants that are not complying with the alcohol ban request and want such institutions to ask them to follow the request.

"The request (by the financial institutions) would not be based on law. It is not aimed at restricting financing" to the restaurants, the minister said.

Nishimura also said that day that the government will ask alcohol beverage companies to stop selling drinks to restaurants during the state of emergency.

Under the state of emergency to be newly effective in Tokyo and extended in Okinawa, the government will prohibit restaurants from serving alcohol and maintain its request for them to close by 8 p.m.

In prefectures where a quasi-state of emergency will be extended to Aug. 22, such as Chiba, Saitama, Kanagawa and Osaka, restaurants are asked not to serve alcohol in principle. But they can until 7 p.m. depending on the respective governors' decisions.