Japan began accepting applications Monday for so-called vaccine passports for people who have been fully inoculated against COVID-19 to travel internationally, as Japanese business lobbies have called for their introduction to help facilitate business activities.

So far, Italy, Austria, Turkey, Bulgaria and Poland have agreed to ease COVID-19 quarantine rules for holders of the Japanese certificates, while South Korea will also accept them as one of the documents needed in exempting holders from quarantine requirements, according to the Japanese government. 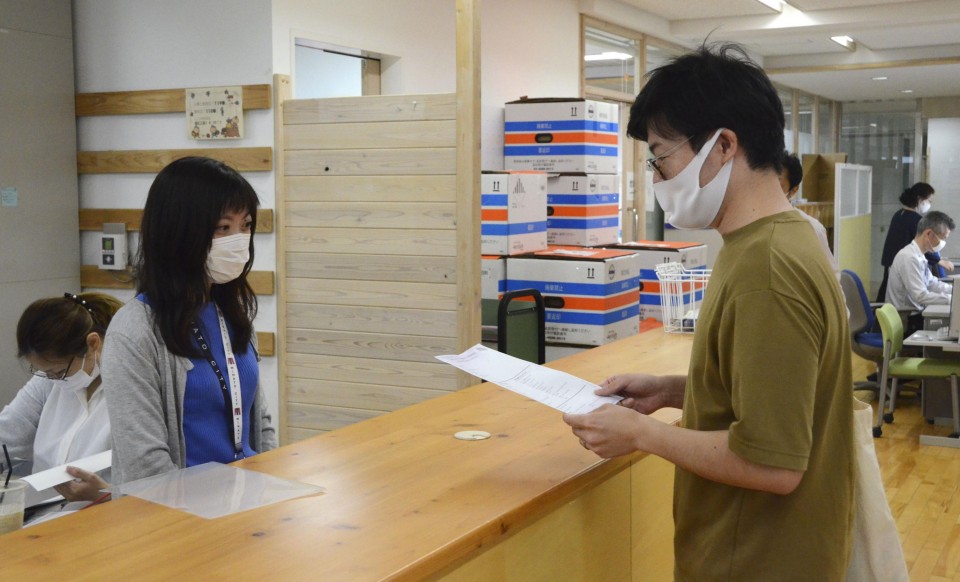 An applicant (R) receives a COVID-19 vaccination certificate at a public health center in Tokyo's Minato Ward on July 26, 2021. (Kyodo)

Estonia has also agreed to accept the certificate, although it currently does not impose quarantine regardless of whether the person has been vaccinated or not. The Japanese government is now in talks with other countries to expand the use of its vaccine passports.

"We consider it to be an important tool in resuming international travel going forward," said Chief Cabinet Secretary Katsunobu Kato at a regular news conference.

But the top government spokesman also urged people to refrain from applying for the certificate unless they have plans to travel abroad to prevent a flood of applications.

The certificates will be official records issued free of charge by local municipalities showing a person has been fully inoculated against COVID-19, with information such as name, passport number and date of vaccination also included.

People who wish to obtain the certificates will be required to submit in person or via mail documents, including the application form, passport and vaccination tickets.

The application form and the certificate are currently restricted to paper, but the Japanese government is seeking to eventually introduce digital application and issuance.

In the morning, businesspeople and foreign nationals were seen coming in for applications at a public health center in Tokyo's Minato Ward.

Among them, Junji Shirota, 34, scheduled to study at a British graduate school, received the certificate in less than 20 minutes.

"I heard I need to present this when I enter restaurants and bars in Britain, so now I can travel with relief," he said.

The country's largest business lobby, the Japan Business Federation, known as Keidanren, has proposed that the certificates be also used to raise event attendance caps and for restaurant discounts in Japan.

But such use is feared to increase the burden on local governments, which process the applications, leading to discrimination against people who have not been vaccinated.

Still, some restaurants and hotels within Japan are already giving discounts to people who present their vaccination records.

The Japanese government is stepping up its vaccination rollout, which has been slow compared with other developed countries. The program began in February with health care workers and expanded to those aged 65 or older from April, while people under 65 have recently started receiving shots in some municipalities and by companies for their employees.

But a recent supply shortfall is forcing some municipalities to restrict accepting reservations while new applications by companies have been suspended.

Suga has said he aims to finish inoculating all eligible people in Japan who wish to receive shots by November.