Local hope Kei Nishikori bowed out of the Tokyo Olympic tennis tournament Thursday with a 6-2, 6-0 loss to world No. 1 Novak Djokovic in the men's singles quarterfinals.

The clash played out under lights at Ariake Tennis Park after the International Tennis Federation responded to complaints from players by pushing back the daily start time for Tokyo Olympic matches from 11 a.m. to 3 p.m. to avoid the worst of the midday heat.

Nishikori, who exited from the men's doubles quarterfinals along with partner Ben McLachlan on Wednesday, was visibly frustrated as he failed to mount any kind of challenge to Djokovic, who had won 16 of their 18 previous tour meetings.

"His defense was amazing today," world No. 69 Nishikori said. "I was trying to stay with him, but I couldn't, unfortunately." 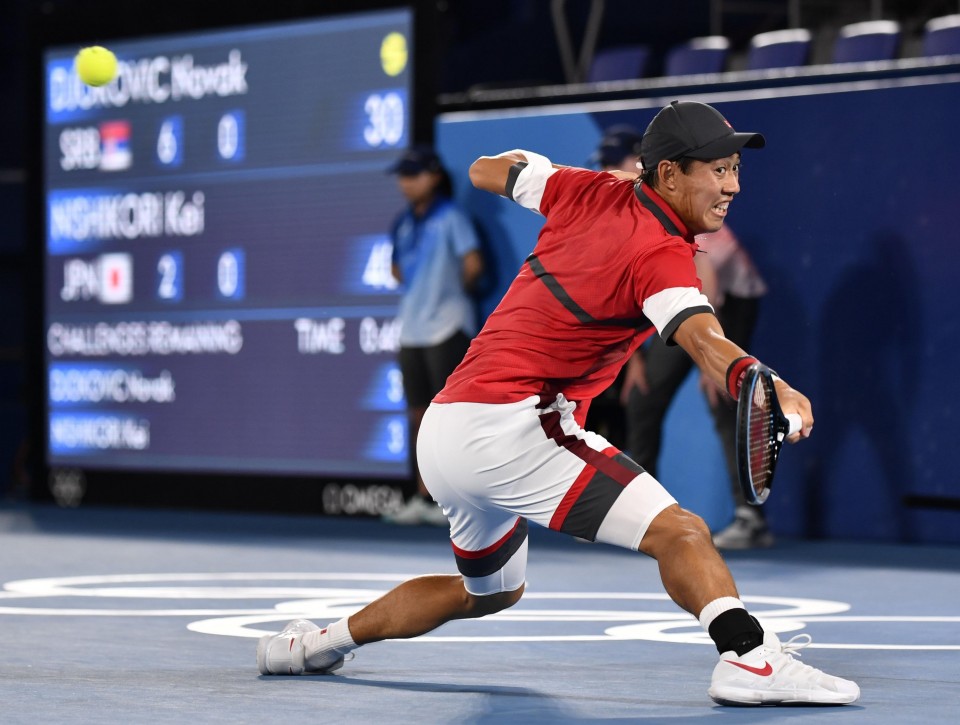 Struggling to put his first serve in play, Nishikori gave up the break on his first service game and had little luck challenging his opponent's serve.

"I thought I was playing OK today, but my serving was bad, and he was attacking every return," Nishikori said.

The Japanese earned his first break point at 30-40 in the opening game of the second set, but Djokovic held firm with an emphatic forehand winner and eventually closed out the game by winning a long rally at the net.

The Serb powered through the rest of the set, breaking Nishikori three more times to book his place in the semifinals.

Having won the first three Grand Slam tournaments of the year, Djokovic has an Olympic-year "Golden Slam" within his sights, and Nishikori believes the Serbian great has a strong chance to achieve the feat.

"The way he's played today, this week and the last couple months, it's been amazing, so I'm sure he has a (good) chance," he said.

Djokovic, one of the players who pushed for the schedule change, said he had given his "best performance in the tournament" following the late start.

"It's great that we're playing in the afternoon hours, so we don't experience too much heat, although it's still very, very humid," he said.