Japan is considering vaccinating about 70,000 volunteers for the Tokyo Olympics and Paralympics, while thousands of media members will be tracked by a global positioning system when they are under mandatory quarantine after entering the country to improve the safety of the major event amid the coronavirus pandemic, officials said Tuesday.

Olympic minister Tamayo Marukawa said in response to parliamentary questioning that officials have already agreed to pursue the idea of vaccinating all volunteers who registered through the Tokyo Games organizing committee to assist at venues and the athletes' village.

She disclosed the plan at a time when Japan still lags behind other developed countries in providing inoculations, and the large majority of people in the country have yet to be vaccinated with less than 50 days until the opening of the Olympics.

"We would like to consider thoroughly, with other officials concerned, the practical issues regarding what could be done to realize a safe and secure games," she said while stressing that vaccinating volunteers should not get in the way of inoculating the Japanese public.

Last week, Toshiro Muto, CEO of the organizing committee, told reporters that roughly 10,000 of the 80,000 people scheduled to volunteer at the games had quit, citing concern about the virus as a possible reason. 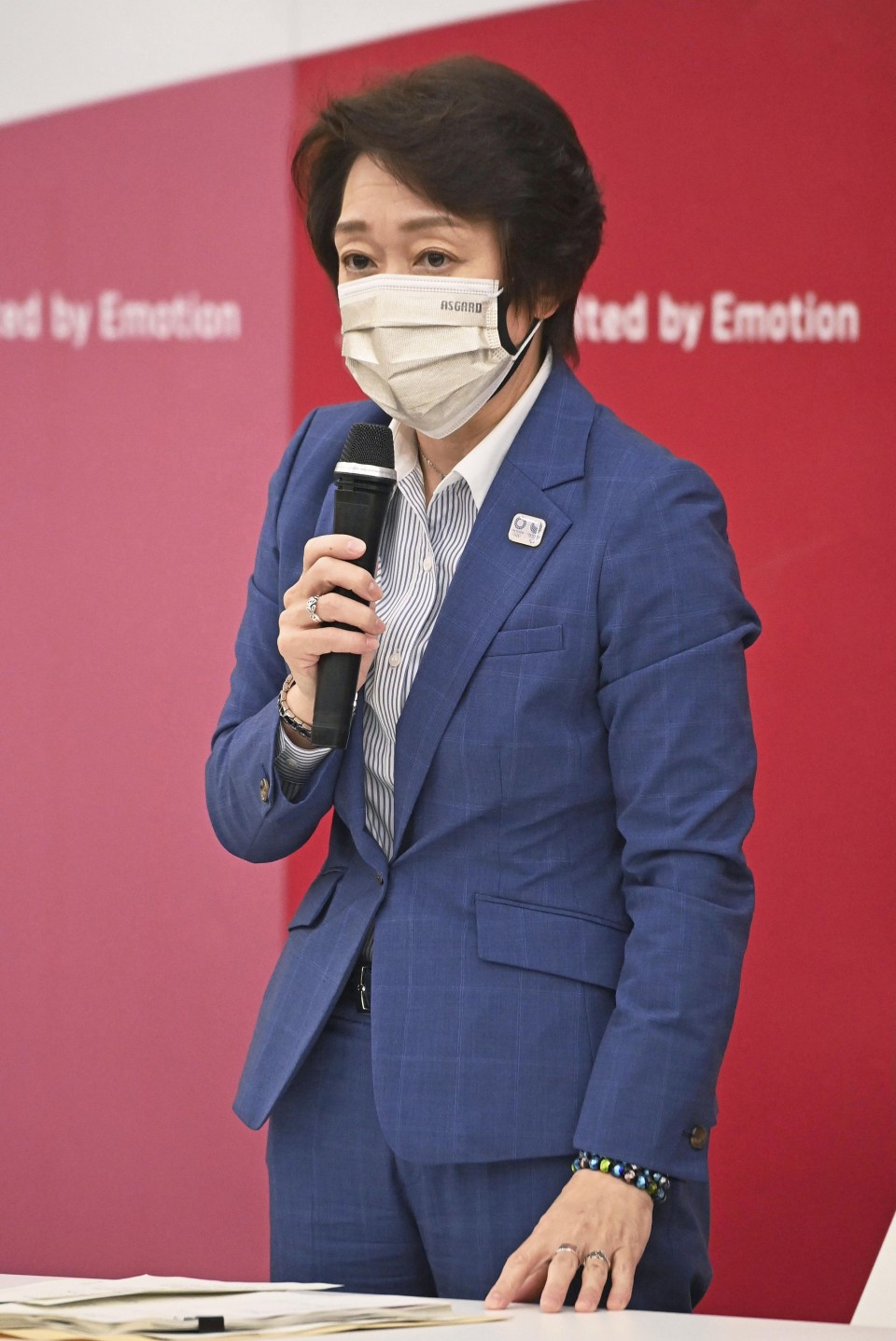 Seiko Hashimoto, president of the Tokyo Olympic and Paralympic organizing committee, speaks during a board meeting of the committee in Tokyo on June 8, 2021. (Pool photo) (Kyodo) ==Kyodo

The International Olympic Committee has said that U.S. pharmaceutical giant Pfizer Inc. will provide vaccines for free to delegations participating in the Tokyo Games.

Japan plans to receive Pfizer vaccine doses for about 20,000 people, including support workers and officials expected to come into close contact with athletes. Vaccinations for Japanese athletes started on June 1.

After a meeting of the organizing body's executive board, Muto said there have been discussions about the vaccination campaign being expanded widely to non-athletes attending the games.

Meanwhile, Seiko Hashimoto, president of the organizing committee, said that members of the media from abroad covering the games will be closely monitored.

"To make sure they do not go to places other than those pre-registered, we will use GPS and other means to strictly control their activities," Hashimoto said at the meeting.

Members of the media and others, including those from corporate sponsors, entering Japan will be required to complete a 14-day quarantine period ahead of the Olympics and Paralympics.

The officials said they will by tracked by GPS only while quarantined.

Hashimoto said they will also be limited to accommodation overseen by the organizing committee, bringing down the number of hotels where they can stay to about 150 from roughly 350 planned initially.

She said they will not be allowed to stay in rental accommodations or friends' homes.

"We'll set up a framework that does not hamper (the country's) response to the novel coronavirus," Hashimoto said, adding she wants to begin vaccinating games staff in Japan from mid-June.

The executive board meeting was the last scheduled before the opening of the Olympics, according to the organizing committee.

On Tuesday, traffic restrictions on some roads around Tokyo's National Stadium, the main venue of the games, began to set up security fences.

The traffic control will be put in place until Sept. 30, nearly one month after the closing of the Paralympics, according to officials.