Japan's COVID-19 vaccination efforts are picking up steam with many local governments set to expand their rollout to those under 65 this month, and preparations under way for on-site inoculations at workplaces and universities.

The government, which launched its vaccination program for those 65 and older in April, had originally planned to begin its vaccine rollout for those under 65 only after finishing vaccinating around 36 million elderly people. 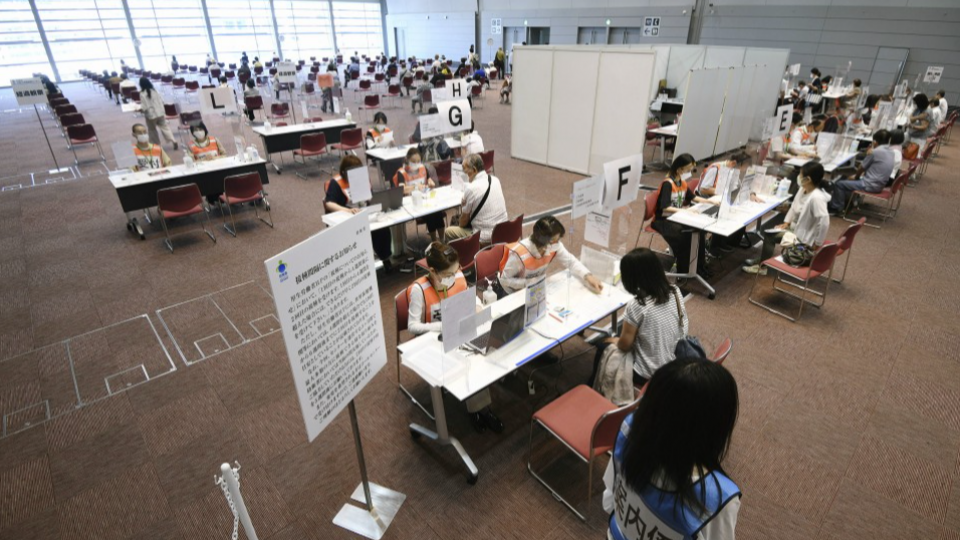 People receive a certificate proving they have been vaccinated for COVID-19 at a mass vaccination center set up on Osaka International Convention Center in the western Japan city on June 9, 2021. (Pool photo) (Kyodo) ==Kyodo

But the inoculation drive is now being accelerated with less than two months before the Tokyo Olympics open.

Prime Minister Yoshihide Suga, facing criticism for the slow vaccine rollout compared with other developed countries, announced a series of policy changes at the end of May to speed up COVID-19 vaccinations in Japan.

The government also said earlier this month it will start vaccinations at workplaces and universities on June 21. As of Wednesday, over a thousand companies have applied for the scheme.

Among local governments, the city of Yatomi in Aichi Prefecture will start vaccinations of people aged between 60 to 64 from Thursday, while Taiki in Hokkaido will begin vaccinating all people aged 60 to 64, and those aged 16 and over with underlying conditions, from June 14.

Vaccinations of the elderly have also been proceeding smoothly in the capitals of Wakayama and Saga prefectures, with both cities set to make shots available to residents under 65 by the end of June.

In Tokyo, Sumida and Nakano wards are leading the way with both aiming to start vaccinating residents under 65 from June 28.

Meanwhile, some municipalities have decided to prioritize residents based on their occupation. Fukuoka, southwestern Japan, has started vaccinating workers at day-care centers, and plans to move on to staff at kindergartens and schools next.

Nara, the site of many tourist spots in western Japan, will offer mass vaccinations to taxi and bus drivers, as well as hotel employees, from next Monday.

During a debate in parliament Wednesday, Suga said the government is aiming to finish inoculating all citizens who want COVID-19 vaccines by November.