The Group of Seven leading economies plan to back Japan's efforts to stage this summer's Olympics in a joint statement to be released later this month after a summit of their leaders, a diplomatic source said Wednesday.

The support for the Olympics and Paralympics was "strongly requested" by the Japanese government, the source said, as it struggles to turn public opinion in favor of the games, with the coronavirus continuing to impact people's lives. 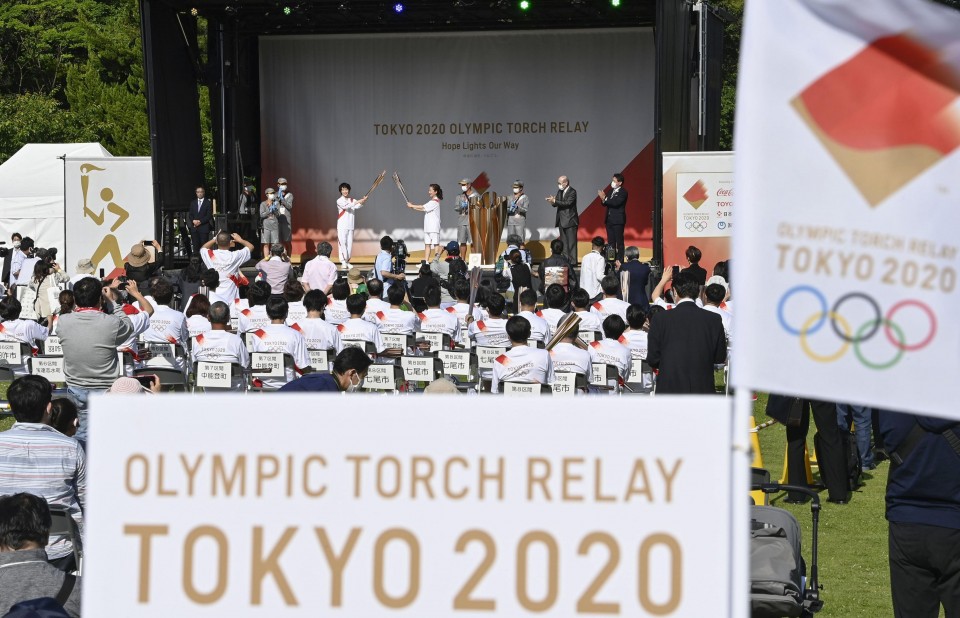 A Tokyo Olympic torch relay event takes place in Ishikawa Prefecture on June 1, 2021, with the relay on public roads having been canceled due to the coronavirus pandemic. (Kyodo)

The forthcoming communique of the summit, slated for June 11 to 13 in Cornwall, southwest England, is also likely to call on Japan to ensure that the global sporting event is held safely, according to the source.

On Wednesday, a day before the 50-day countdown to the opening of the Tokyo Olympics, the government's top spokesman Katsunobu Kato said Japan will explain at the summit that it is committed "to realizing a safe and secure games."

After a virtual meeting in February, the leaders of the G-7, which groups Britain, Canada, France, Germany, Italy, Japan and the United States, said in a statement they "support the commitment of Japan to hold the Olympic and Paralympic Games Tokyo 2020 in a safe and secure manner this summer as a symbol of global unity in overcoming COVID-19."

The diplomatic source said the wording of the upcoming statement is still being coordinated, but none of the G-7 members opposes Japan's efforts to stage the Olympics this summer.

Tokyo and some other areas of the country, hit by the rapid spread of coronavirus variants, are under a state of emergency that was recently extended to June 20, with people urged to avoid nonessential outings.

Media polls have shown that a large majority of Japanese people are concerned about the further spread of the virus and are opposed to going ahead with the Olympics, following the unprecedented postponement of the games last year.